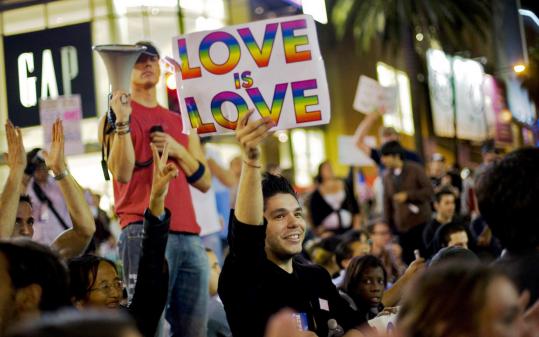 SACRAMENTO - As protesters took to the streets for a fifth day, Governor Arnold Schwarzenegger yesterday expressed hope that the California Supreme Court would overturn Proposition 8, the ballot initiative that outlawed same-sex marriage.

In an interview with CNN, Schwarzenegger also predicted that the 18,000 gay and lesbian couples who have wed already would not see their marriages nullified by the initiative.

"It's unfortunate, obviously, but it's not the end," he said about the same-sex marriage ban. "I think that we will again maybe undo that, if the court is willing to do that, and then move forward from there and again lead in that area."

Hundreds of gay rights advocates rallied across the state yesterday in protest of the ballot measure. Some of them marched to Catholic and Mormon churches that supported passage of the ban.

Hundreds of protesters gathered near Saddleback Church in the Orange County city of Lake Forest as congregants attended services on the religious campus. The pastor of the megachurch brought Barack Obama and John McCain together last summer for a "faith forum."

The pastor of the 4,000-member All Saints Episcopal Church in Pasadena spoke out against Proposition 8, calling the religious community's support of it "embarrassing." The church announced that while it could no longer legally marry same-sex couples, it would continue blessing gay civil unions.

"It's very unfortunate and embarrassing that the [Christian religion] is in large part responsible for this act of bigotry," Bacon said.

In Sacramento, a protest at the state Capitol was boisterous but peaceful as speakers led the crowd in chants. Protesters waved rainbow flags, a symbol of the gay rights movement, and "No on 8" signs as police watched from the side.

About 150 protesters congregated in front of the Cathedral of Our Lady of the Angels in Los Angeles, chanting, among other things, "What would Jesus say?"

With his favorable comments toward gay marriage, Schwarzenegger's thinking appears to have evolved.

Schwarzenegger publicly opposed Proposition 8, which amends the state Constitution to declare that "only marriage between a man and a woman is valid or recognized in California."

Yesterday, he urged backers of gay marriage to follow the lesson he learned as a bodybuilder trying to lift weights that at first were too heavy for him. "I learned that you should never, ever give up. . . . They should never give up. They should be on it and on it until they get it done."

The governor's position on the fate of the existing same-sex marriages aligns him with California Attorney General Jerry Brown, who has said he believes the state Supreme Court will uphold existing marriages as valid.

The 14-word constitutional amendment does not state explicitly that it would nullify same-sex marriages performed before Tuesday's election, although proponents claim it will.

At the Lake Forest demonstration, Martijn Hostetler, 30, of West Hollywood, held a sign that read "Purpose Driven Hate," a dig at Rick Warren, the church's celebrity pastor and author of the best-seller "The Purpose-Driven Life," who backed the ballot measure.

Although demonstrators received supportive honks from motorists, many members of the megachurch said they had little sympathy for the protesters when the matter had already been settled by voters.

"We're a democracy and our strength is that majority wins the vote," said John Kirkpatrick, a church member.

As many as 10,000 people took to the streets in San Diego on Saturday and similar numbers marched in Los Angeles to protest the passage of the amendment.