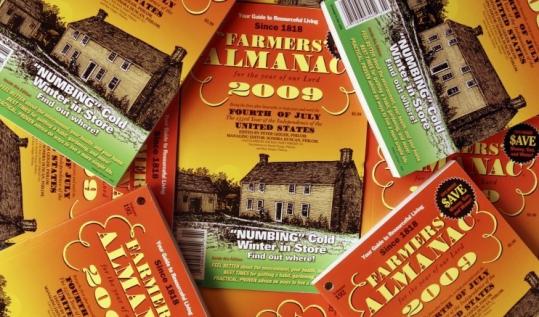 Copies of the Farmers' Almanac are displayed at the publisher in Lewiston, Maine. Almanacs around the country use traditional methods to create long-range weather charts (Pat Wellenbach/Associated Press)
By David A. Fahrenthold Washington Post / September 12, 2008
Text size – +

HAGERSTOWN, Md. - They call themselves "prognosticators," people who study the phases of the moon and the height of wasp nests, then declare there will be showers on Oct. 18, 2009.

Prognosticators create long-range weather charts for the handful of surviving farmer's almanacs - an old job, done an old way. They eschew Doppler radar and weather satellites and look for clues in the timeless rhythms of nature.

But now, the world and the weather don't look as timeless as they used to. Scientists say the planet is warming, threatening to make droughts more widespread, heat waves more punishing and hurricanes more severe.

So one of the country's most fervently unmodern subcultures has had to confront climate change. Prognosticators are deciding how - or if - they should factor greenhouse gases into weather-predicting formulas that are two centuries old.

Traditional methods "worked really well for hundreds of years," said Bill O'Toole, prognosticator for the Washington area's local almanac, J. Gruber's Hagers-Town Town and Country Almanack, founded in 1797. "Global warming has kind of messed it up," said O'Toole, who has started predicting shorter winters and less snow than in the past.

But this week, one of the giants of the almanac world pronounced in the opposite direction. The Old Farmer's Almanac, based in Dublin, N.H., predicted "global cooling" for the next two decades. The forecast was based on an expected change in sunspots and ocean temperatures, still better-understood factors than climate change, said the almanac's editor, Janice Stillman.

"We're looking forward to cooler-than-normal conditions for quite some time," Stillman said in a telephone interview. "We just simply don't predict what kind of effect greenhouse gases . . . may have on that."

Across the country, this is almanac season. The 2009 versions of these old-timey books are arriving in stores, from such behemoths as the 3.5 million-circulation Farmers' Almanac in Maine to the struggling almanac here in Hagerstown, about 70 miles northwest of Washington, which will print 75,000 copies.

The forecasts are far-reaching and tend to vary from book to book. "Blustery and colder" is the Maine almanac's prediction for Dec. 31, 2009, in the Mid-Atlantic. "Cloudy, not as cold," the Hagerstown almanac says.

If this kind of ultra-long-range forecasting sounds improbable, the US government says it's impossible.

"In the opinion of most scientists in the field, you cannot say anything about individual daily weather more than about a week out," said Mike Halpert, of the Climate Prediction Center at the National Oceanic and Atmospheric Administration.

Prognosticators contend that the government's not looking in the right places.

Some say weather secrets can be traced in cycles of sunspots - dark spots on the sun related to changes in magnetic activity. The idea is that shifts in the sun's energy eventually affect Earth's climate. Another school studies the movements of the tides, believing that they signal changes in the weather in roughly 18-year cycles.

Others look closer to home.

"This year, I find . . . the squirrels are not shaking the nuts out of the trees," said Gerald Lestz, 94, editor of Baer's Agricultural Almanac & Gardener's Guide in Lancaster, Pa. And wasps are building their nests relatively close to the ground, perhaps indicating that snow would not pile up too high, so this winter "looks a little on the mild side," he said.

Almanac staff members say their predictions are trusted by the public, often consulted by brides-to-be, members of the clergy, horse racing promoters, and other people who want to know if the rain will fall on a special day that might be months or years off.

They contend that they're correct more often than not.

In Hagerstown, the weather isn't the most astounding thing the almanac predicts: it boasts a formula to identify an unborn child's sex, using the birthday and Zodiac sign of an older sibling.