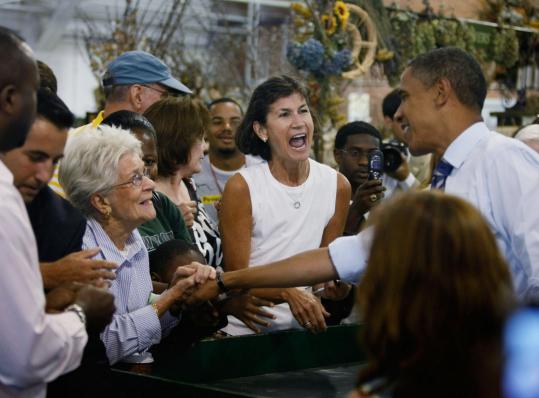 Democrat Barack Obama pledged yesterday to create millions of union jobs in alternative energy and to end tax breaks for companies that move jobs overseas, using tough new populist language to persuade voters that he, not Republican rival John McCain, is best positioned to lift the limping US economy.

On the other side of the country, McCain told voters that he is not challenging Obama's patriotism in criticizing his call to pull out of Iraq, only his judgment.

McCain challenged Obama's positions on Iraq, including his opposition to the temporary build-up of troops last year.

Obama has acknowledged that the so-called "surge" reduced violence in Iraq, but he adds that the surge has failed in its political goal of facilitating a reconciliation among contentious Iraqi factions.

Obama proposes to withdraw US combat forces from Iraq within 16 months; McCain opposes any timetable for withdraw. Meanwhile, Iraqi leaders have been pressing for a timetable.

Never far from McCain are questions about his running mate, whom McCain is considering announcing as early as next week.

One voter asked, "Are you going to pick a vice president that conservatives can rally around in the future, or are you going to give us someone that is going to make us want to stay home?"

McCain responded, "I will nominate a person to be vice president, my running mate, who shares my principles, my values and my priorities."

Obama, meanwhile, was on a two-day bus tour through Virginia, a likely general election battleground state, amid frenzied speculation about when he would announce his running mate.

At a community college in Martinsville, Va., Obama told about 350 supporters that McCain had a compelling biography as a former prisoner of war in Vietnam. But, he said, the GOP hopeful would follow the economic policies of the Bush administration if elected president.

Obama stuck mostly to economic themes during his appearance, adopting a pitch that sounded much like Hillary Clinton in the waning days of her primary campaign.

The former first lady defeated Obama in eight of the last 13 primaries using populist language that strongly resonated with rural and working-class voters.

"I will fight for you every single day," he pledged. "I'll wake up every day in that White House thinking about those people in Martinsville."

He promoted his plan to cut taxes for the middle class and said he understands that families are facing hard times.

That, Obama said, is in stark contrast to Phil Gramm, an economic adviser to Republican rival John McCain, who famously talked recently about Americans "whining" about the economy and going through a "mental recession."