Speculation swirls around a Patrick appointment 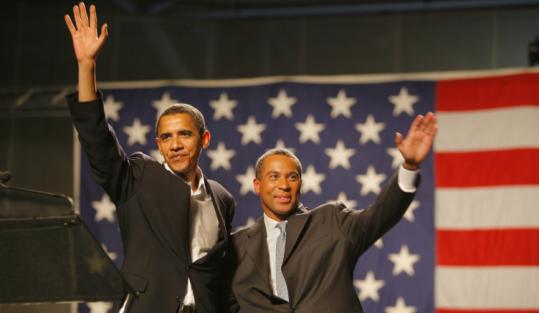 Speculation that Governor Deval Patrick could wind up in a Barack Obama presidential administration has been rife, and lately political and legal observers are pointing to the Supreme Court as a potential destination for the Harvard Law grad and former Justice Department official.

Legal blogs have been spreading Patrick's name as a potential Supreme Court pick for at least a year. In recent months, both The New York Times and The have mentioned Patrick either first or second in stories handicapping potential Obama high-court nominees.

Bay State lawyers said they have heard the talk, but one local legal observer, David Yas, publisher of Massachusetts Lawyers Weekly, said the governor might have some fence-mending to do on his home turf if he were to accept a call to the lofty bench.

A Patrick spokeswoman said yesterday that the governor was not seeking any appointment from Obama, a response similar to the one the Patrick issued when his name was floated as a potential attorney general.

"The governor loves his job and is running for reelection," said the spokesman, Kyle Sullivan. "He appreciates the kind words but has no interest in any other position than the one he currently has."

One Patrick supporter is less than convinced by the denials.

"When you get the call from the president of the United States, even if it's something you're prepared to say no to, that's a call you have to take," said Michael Ricciuti, a former prosecutor who worked with Patrick at the Boston law firm of Hill and Barlow in the 1980s.

Ricciuti, who last year was appointed to Patrick's Anti-Crime Council, said the idea of a Justice Patrick was floated among colleagues early in his legal career.

"One of the senior partners at Hill and Barlow said years ago, before Deval considered running for office, that he was a guy you would expect to see on the Supreme Court," said Ricciuti, who now practices in the Boston office of the law firm K&L Gates. "He was very good with the law and very good on his feet."

But Yas said the early speculation won't do much to change the perception that Patrick is "a distracted governor," Yas said.

Also, the governor might have lost some support in legal circles, he said.

The backing of the legal community in his home state would be critical to any Supreme Court confirmation process. But there's been frustration with the amount of time Patrick has taken to make some judicial appointments and with his perceived lack of attention to lawyers' pet issues, including court-appointed attorneys and courthouse conditions.

"Lawyers were really behind him, but since he's taken office, lawyers would give him a C-minus or D-plus," Yas said.

Correction: Because of a reporting error, a story on Monday's Nation page about speculation that Governor Deval Patrick could be nominated to the Supreme Court in a Barack Obama administration included an incorrect quote from David Yas, publisher of Massachusetts Lawyers Weekly. He said, "Lawyers were really behind him [Patrick], but since he's taken office, lawyers would give him a B-minus or C-plus."