Tries to put spotlight on his patriotism 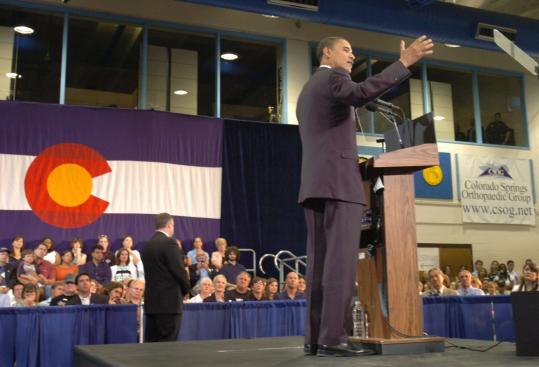 Throughout the week, Barack Obama has been striving to win over voters in Republican areas like Colorado Springs, above. (JERILEE BENNETT/THE GAZETTE VIA ASSOCIATED PRESS)
Email|Print|Single Page| Text size – + By Jonathan Weisman Washington Post / July 3, 2008

COLORADO SPRINGS - Continuing to press the themes of values, faith, and patriotism, Senator Barack Obama exhorted Americans yesterday "to step into the strong currents of history" and volunteer for service to their country, pledging to dramatically expand opportunities for those accepting his challenge.

On a campaign swing that included visits to military bases, which he had largely steered clear of, the presumptive Democratic presidential nominee sought to emphasize his own love of country.

"That's the bet our Founding Fathers were making all of those years - that our individual destinies could be tied together in the common destiny of democracy, that government depends not just on the consent of the governed, but on the service of citizens," he told a small audience filling a gymnasium at the University of Colorado at Colorado Springs. "That's what history calls us to do, because loving your country shouldn't just mean watching fireworks on the Fourth of July. Loving your country must mean accepting your responsibility to do your part to change it."

Throughout the week, Obama has been striving to win over voters in Republican areas, defending his patriotism in Independence, Mo., on Monday; pledging to expand federal assistance to religious social service groups in rural Ohio on Tuesday; and preaching service in central Colorado yesterday. He will speak about veterans in Fargo, N.D., today, then will highlight the theme of family tomorrow as he celebrates Independence Day in Butte, Mont., with his wife and two daughters.

He emphasized what he called "the enormity of the American accomplishment," touring Peterson Air Force Base here and visiting the ultra-secretive North American Aerospace Defense Command, US Northern Command headquarters, and the Air Force Academy.

Such stateside military visits have been a rarity for Obama. Since entering the Senate in 2005, he has visited only the National War College and Walter Reed Medical Center in Washington, D.C., along with two bases in Illinois, his home state.

But such installations are critical in the West, especially along Colorado's Front Range. Colorado gave President Bush 52 percent of its vote in 2004, compared with 47 percent for Senator John F. Kerry, but the vote in El Paso County, the home of Colorado Springs, was a far more lopsided 67 percent to 32 percent.

Senator Ken Salazar, a Colorado Democrat who won his seat in 2004, said Obama was "exactly right" to campaign here and attempt to at least trim his margin of defeat.

"The ideal is to win; however, having been a veteran of three statewide races in six years, I know the reality of places like El Paso County," Salazar said.

Tom Vilsack, a former Iowa governor and strong supporter of Senator Hillary Clinton, said that after the hard-fought primary season, Obama had no choice but to reintroduce himself to the wider audience of the general election campaign. Vilsack said the effort appeared to be going well, citing a front-page photo in yesterday's Des Moines Register of Obama surrounded by small-town Ohio children.

"People want to know not just what his proposals are or that he gives a good speech," Vilsack said. "They want to know where his heart is."

Obama did not shy from partisan controversy as he spoke here of Sept. 11, 2001, and the readiness of Americans to serve after the terrorist attacks.

"We were ready to step into the strong current of history, and to answer a new call for our country, but the call never came," he said. "Instead of a call to service, we were asked to go shopping."

At $3.5 billion a year, his service plan, laid out in December and expanded on only slightly yesterday, has been derided by conservatives as an example of big government.

He would grow the AmeriCorps program established by President Clinton by 250,000 slots; double the size of the Peace Corps by 2011; expand the Foreign Service; and create an Energy Corps to conduct renewable-energy and environmental-cleanup projects. Veterans would be enlisted to help other veterans find jobs and support, and a new Social Investment Fund Network would support the nonprofit sector.

An American Opportunity Tax Credit would offer $4,000 to college students who perform 100 hours of public service. An already-planned expansion of the Army and Marine Corps by 92,000 would be fostered with pay increases, more family-friendly policies, and an end to recruiting impediments such as "stop-loss" decrees that prevent service members from leaving after their tours have ended.

A component Obama added yesterday would allow veterans to use expanded education benefits under the new GI Bill to seek training for jobs working with renewable energy.