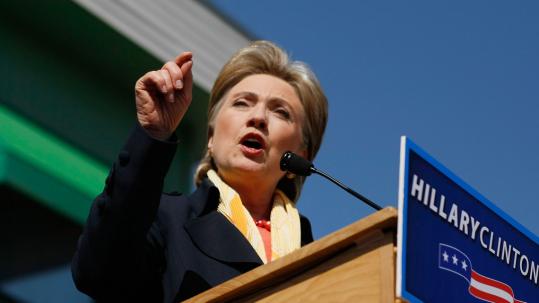 WASHINGTON - Hillary Clinton and Barack Obama, competing for votes ahead of tomorrow's critical primaries, fought over the gas tax yesterday, with Obama calling Clinton's plan for a gas tax holiday a "Washington gimmick," and the New York senator dismissing as "elitist" the widespread criticism of her proposal.

"I'm not going to put my lot in with economists, because I know if we did it right . . . it would be implemented effectively," said Clinton, who was asked during an hourlong television appearance to name a credible economist who backed her plan to lift the 18.5-cent federal tax on gasoline for the summer.

In a barely veiled attack on Obama, Clinton added, "We've got to get out of this mind-set where somehow elite opinion is always on the side of doing things that really disadvantage the vast majority of Americans."

Obama, making his case on a rival network, derided the gas tax idea as irresponsible pandering to low-income voters.

"This defines, I think, the difference between myself and Senator Clinton," the Illinois senator said, reinforcing his campaign-long criticism of Clinton as someone too closely tied to old-style Washington poli tics. The gas tax holiday "is a classic Washington gimmick. It is a political response to a serious problem that we neglected for decades," Obama said.

The dueling appearances were the closest thing to a debate the two Democratic contenders will have before tomorrow's contests in Indiana and North Carolina.

While appearing on different networks, both presidential candidates were grilled on matters ranging from Iran to the controversy surrounding Obama's former pastor and the role of superdelegates in determining the nomination.

Recent polls show Clinton slightly ahead in Indiana, where she hopes her popularity among working-class Democrats will blunt any advantage Obama has as a senator from a bordering state.

In North Carolina, Obama's appeal among African-Americans has given him an edge, although Clinton has narrowed the gap in recent surveys there.

Clinton is lagging by more than 130 delegates behind Obama and is hoping that a win in Indiana and an upset in North Carolina will persuade superdelegates to deny the nomination to Obama despite his insurmountable lead among pledged delegates.

The candidates split the four pledged delegates at stake in this weekend's Democratic caucuses in Guam.

Both Democrats campaigned in Indiana yesterday. They attended events within miles of each other in Fort Wayne and returned to Indianapolis in the evening to address the Indiana Democratic Party's Jefferson Jackson Dinner. Both will be in North Carolina today.

The gas tax holiday has been widely derided by economists at MIT, the Center for Economic and Policy Research, the Tax Policy Center, and other institutions, but the idea has been received warmly by low-income voters in rural areas.

Obama and several analysts say the tax break would provide little relief and would deplete the Highway Trust Fund, imperiling both jobs and the safety of the country's infrastructure. Clinton said she would pay for the tax cut with a windfall profits tax on oil companies, but critics say the companies could just pass on the extra cost to consumers.

Appearing on NBC's "Meet the Press" yesterday, Obama acknowledged having voted for a similar idea years ago, when he was in the Illinois Senate, but said he "learned from a mistake" when he realized that the oil companies had simply raised gas prices to erase the gas tax cut.

Often on the defensive during her interview before a studio audience on ABC's "This Week," Clinton defended her recent statement that a Hillary Clinton administration would be prepared to "totally obliterate" Iran if it attacked Israel.

"Why would I have any regrets?" Clinton said under assertive questioning by host George Stephanopoulos, a one-time aide to President Clinton. "I'm asked a question about what I would do if Iran attacked our ally, a country that many of us have a great deal of, you know, connection with and feeling for, for all kinds of reasons. And, yes, we would have massive retaliation against Iran."

Obama, addressing the same issue almost simultaneously, likened Clinton to President Bush and said the threat - derided by the Iranian government as a violation of the UN charter - was reflective of "cowboy diplomacy."

"It's not the language that we need right now, and I think it's language that's reflective of George Bush. We have had a foreign policy of bluster and saber-rattling and tough talk, and, in the meantime, we make a series of strategic decisions that actually strengthen Iran," Obama said.

Asked how he would respond if Iran attacked Israel, the chief US ally in the Middle East, Obama pledged to "act forcefully and appropriately on any attack against Iran, nuclear or otherwise. . . . But it is important that we use language that sends a signal to the world community that we're shifting from the sort of cowboy diplomacy, or lack of diplomacy, that we've seen out of George Bush."

Both contenders also faced uncomfortable questioning on their personal characteristics. Clinton was asked why polls suggest that 6 of 10 voters don't trust her, and Obama again was asked to defend his handling of the controversy concerning his former pastor, the Rev. Jeremiah Wright, whose criticism of the US government has led some voters to question Obama's patriotism.

"Well, obviously, it's troubling that people would have that opinion," she said when asked about the negative views of her in polls. "Have I drawn a lot of fire from people who have come right at me and, frankly, you know, done a lot of attacking of me? Sure. But I think that goes with being a leader."

Obama was asked whether his recent strong repudiation of the former pastor was not just a political move to appease white voters.