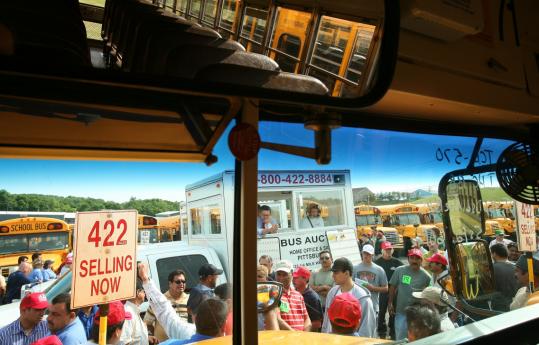 NEAR SLIPPERY ROCK, Penn. -- Close to 100 men clustered in front of a 13-year-old yellow school bus, one of about 270 parked in a field 40 miles north of Pittsburgh. Exhaust fumes billowed into the air. Translators got ready.

"Do I hear $4,500? $4,200 right there. $4,500? $4,300?" auctioneer Earl Thoma barked rapid-fire from the back of a truck. His words were quickly repeated in Spanish and other languages to buyers who had traveled from Central America, Africa, and the Middle East. "Guys, this is a nice bus."

The bus sold in two minutes, joining a vast fleet of retired US school buses that transport hundreds of thousands of people in Central America.

Buses considered too old, too polluting, or too unsafe for schoolchildren in the United States are not scrapped. Through auctions like the one at 422 Sales in Pennsylvania, and a network of dealers, drivers, and shippers, thousands of vehicles each year resurface in other countries, repainted bright colors, sporting religious phrases and, often, spewing clouds of pollution.

"We are pressed to get whatever equipment to help us move our population," said Mamadou Diomande, an entrepreneur who was looking for buses at the auction to ship to Guinea in West Africa. Other bidders were buying buses for Mexico, Honduras, Guatemala, Saudi Arabia, Panama, and Zimbabwe. "We cannot afford new," Diomande said.

A 10-year-old bus with about 150,000 miles on it sells for $2,500 to $5,000; a new bus would cost at least $70,000. Before the bus is shipped, or sometimes driven, to another country, it is often filled with spare parts of other older buses to keep the secondhand fleet running for another five, 10, or even 20 years. And the buses often get more than a paint job: In Guatemala, the last two or three rows of a bus are sometimes lopped off so that the vehicles can make turns on narrow streets.

On the busy, long avenues in Guatemala City, the downside to long-lived buses fills the lungs. Heavy black smoke blows from tailpipes, filled not only with global-warming pollution but also soot and other contaminants that cause more immediate health problems.

"We want cleaner buses," said Carla Mollinedo, whose family imports buses to Guatemala from the United States. "We don't want the pollution."

In a lot next to her father's house, eight buses from the United States were awaiting Guatemalan buyers, including one from Connecticut that Mollinedo bought on this spring.

Last year, she bought a Texas bus powered by natural gas, which is cleaner-burning than conventional diesel fuel. But she could find no one who knew how to fix it.

The engine was replaced with an old diesel one.