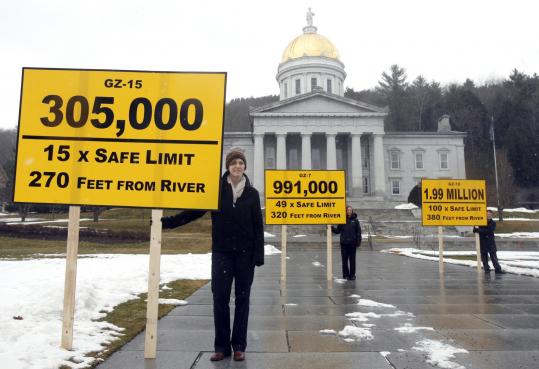 Members of the Toxics Action Center protested outside the State House in Montpelier yesterday with signs representing the monitoring wells at the Vermont Yankee nuclear plant that has been contaminated by tritium leaks. (Toby Talbot/Associated Press)
By Dave Gram Associated Press / February 24, 2010

MONTPELIER - The Vermont Yankee nuclear plant had a radioactive leak years before the one found last month, confirming a disclosure last week by a consultant to the Legislature that a plant employee told him of a previous leak at the reactor, federal officials say.

Donald Jackson, a Nuclear Regulatory Commission section chief, confirmed in a conference call between NRC officials and reporters Monday that the 2005 leak occurred in the same pipe system that is the focus of the search for the source of the current leak. “In 2005, within the confines of this pipe tunnel, there was a problem with one of the pipes,’’ he said.

Tritium is an isotope of hydrogen that has been linked to cancer when ingested in large amounts, but the NRC officials said the tritium leak first reported at Vermont Yankee on Jan. 7 posed no immediate threat to public health and safety.

Plant officials admitted last month that they had misled state officials, sometimes under oath, by saying the plant did not have the sort of underground pipes that could carry tritium.

Vermont Yankee spokesman Larry Smith said Monday evening that he would have to talk to a company lawyer before commenting.

The Vermont Senate is to vote this week on whether to allow Vermont Yankee to continue operating for 20 years beyond its current license expiration date in 2012. The Vermont Legislature is the only one in the country allowed by state law to weigh in on a nuclear plant’s relicensing.

Confirmation that Vermont Yankee found a leak of tritium from an underground pipe in 2005 could provide new evidence that plant officials knew of the existence of the pipes before the incorrect statements about them in 2008 and 2009.

Last week, two environmental groups called on the US Justice Department to launch a similar probe.

Also Monday, a group of Vermont business and labor leaders called for a timeout before the Senate vote, which Vermont Yankee is widely expected to lose.

They argued that lawmakers need to collect more information before making a decision.

John O’Kane - a lobbyist for , whose plants outside of Burlington are Vermont’s largest electric customer and largest private employer - insisted the group was pushing only for more time for deliberation.

To “state that we’re all here because we want’’ the plant to be relicensed is “not what we’ve asked for,’’ he said. “That’s not what we’re saying.’’

That did not appear to square with the Web site website of the Vermont Energy Partnership, which hosted Monday’s news conference and of which IBM is a member.

The lead item on the site is headlined, “The case for Vermont Yankee.’’ It concludes: that “There are likely to be severe financial consequences statewide to closing Vermont Yankee. Vermont’s economy and recovery are at risk.’’