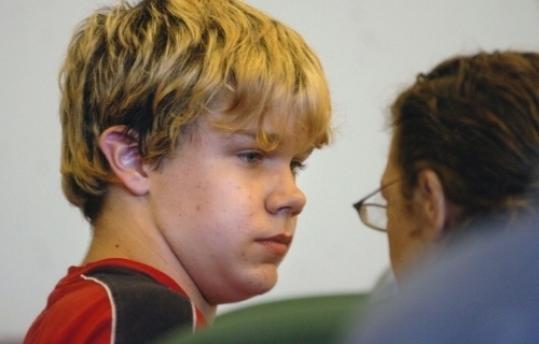 RUTLAND, Vt. - A 14-year-old boy pleaded not guilty yesterday to second-degree murder in the beating and shooting death of his mother, a killing that authorities say was recorded on a 911 tape in New York state.

Christian James Taylor is charged in the death of Francine Morgan, 40, Saturday morning at the home they shared in Wells, near the New York border.

Taylor is being charged as an adult, but Judge William Cohen ordered that he be held at a secure juvenile detention center pending further court proceedings.

A police affidavit filed in the case did not offer a direct motive for the attack. It described how Taylor told state police investigators he did not remember what happened to his mother, but "he either dreamed or remembered hearing his mother scream."

"He continued on to say that he had a feeling of his mom in a frantic struggle with the shadowy figure, his mom fighting, trying not to give up," said the affidavit, written by Vermont State Police Sergeant Daniel Elliott. "He further stated that he felt that his mother was getting fatigued, she was pinned against the wall, and she was trying to break away."

When asked by investigators whether he could have been the person in his vision, Taylor answered it was possible.

An autopsy showed Morgan died from head injuries caused by multiple blows from a blunt object and a gunshot wound to the face, the affidavit said.

Morgan called 911 at 3:55 a.m. Saturday from her cellphone. The call was picked up at a 911 dispatch center in Washington County, N.Y.

"In listening to the beginning of this tape a woman's loud screaming voice is heard," the affidavit said. "During the screaming, noises that are consistent with an object striking another can be heard. As the tape continues, these noises change to a different type of sound. A short time later the female's voice stops. There were no responses to the 911 dispatcher."

When police arrived, they asked Taylor whether his parents were home. Taylor went into the house for a few seconds. When he returned he told police there was something wrong with his mother.