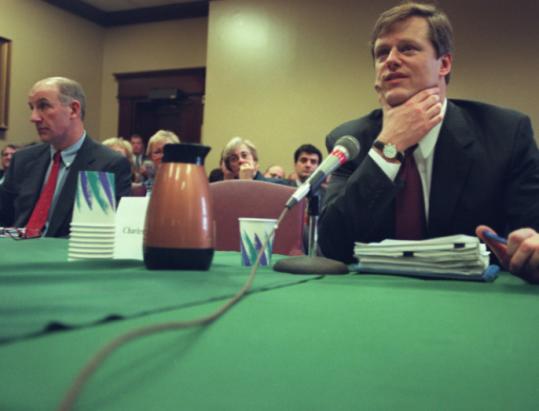 In December 1999, an ailing Harvard Pilgrim Health Care pulled out of Rhode Island with two months’ notice, shuttering the company’s three health centers there and forcing 1,200 physicians and other employees to search for new jobs. Thousands of patients suddenly had to find new doctors, and about 128,000 subscribers scrambled for other health insurance.

The Ocean State accounted for about 10 percent of Harvard Pilgrim’s customers but 45 percent of its losses, and to save the company, new chief executive Charles D. Baker essentially cut off its Rhode Island leg.

In the aftermath, pediatrician Fortunato Procopio and a handful of other physicians from the closed Warwick health center hurriedly cobbled together a practice while trying to reassure their anxious patients.

“We had four to five weeks,’’ Procopio said. “We had to incorporate, we had to forge new alliances with insurance companies, we had to buy computer systems, had to arrange for billing systems . . . and patients were walking into a building that looked abandoned.’’

Procopio, now medical director of health services at the University of Rhode Island, said Baker “made a tough decision and he made it work for his company, but it was calamitous for those of us involved.’’

Eleven years later, Baker, 53, is the Republican candidate for governor of Massachusetts, and he often points to his decade at the helm of Harvard Pilgrim as an example of the leadership he would bring to Beacon Hill. He talks about how he rescued the insurance company from the brink of bankruptcy in 1999, in part by slashing the payroll, and transformed it into the top-ranked health plan in the country.

The extent to which the state aided the company’s turnaround, and the size of premium increases, have been the focus of sharp exchanges between Baker and his opponents, Governor Deval Patrick, Treasurer Timothy P. Cahill, and Dr. Jill Stein, but the Rhode Island chapter has barely been mentioned.

Yet the experience, say Baker supporters and critics, illustrates his proclivity for dramatic and sometimes controversial cutbacks to tackle tough financial problems. While Baker was forced to operate in crisis mode in his early years at Harvard Pilgrim, he later focused on rebuilding the company’s reputation with physicians, employers, and patients. By the time he left last year to mount his campaign, the state’s second-largest health insurer was profitable and had 1.1 million customers, almost as many as it had before its near-collapse.

Now, Baker says, if he is elected he intends to take his Harvard Pilgrim business blueprint to the state’s corner office.

“I’m sure there were a lot of people who thought a lot of what I did was unreasonable, but at the end of the day, most of it worked,’’ Baker said in a recent interview with the Globe.

Fallout in Rhode Island
Harvard Pilgrim’s departure from Rhode Island sparked an uproar, prompting public hearings by regulators and lawmakers. Officials criticized the company and Baker for abandoning the state with little notice and few answers about how the company would pay its outstanding debts there.

Harvard Pilgrim was not just an insurance company in Rhode Island. The company also employed doctors, nurses, and teams of health care providers, and ran clinics and pharmacies that served its HMO members. So the pullout meant patients not only had to find new coverage, but new doctors, specialists, and even places to fill their prescriptions.

After Harvard Pilgrim left, Susan M. Allen, professor of medical science at Brown University, surveyed more than 1,000 of the health plan’s former patients and providers and found significant disruptions in care, particularly among those with chronic health issues.

“The employees and providers of Harvard Pilgrim took extensive measures to make sure there wasn’t extensive fallout for their patients,’’ Allen said in an interview, “but the lead time they were allowed was not sufficiently long, so plenty of people fell through the cracks.’’

Allen found that more than 90 percent of patients were insured again and had a regular physician after 18 months.

The road back for many caregivers who were employed by Harvard Pilgrim was longer.

“Some people left medicine, some left the area, and others of us scrambled to [reopen]’’ Procopio said. “We took out loans to pay our staff . . . we had to take Harvard Pilgrim to court in order to get compensation back, and that took a couple years.’’

Rhode Island lawmakers, including US Representative Patrick Kennedy, accused Baker of misleading customers and regulators about the company’s true intentions right up to the moment it announced it was leaving. The chief executive of Citizens Financial Group testified at a tense State House hearing, according to news reports, that the insurer never mentioned that it might go out of business as it continued to negotiate a new contract with the employer through the summer and early fall.

Baker, who joined Harvard Pilgrim in June 1999 after serving as a top official in the administrations of two Republican governors, said he tried for several months to salvage the Rhode Island operations before announcing in late October that they would close two months later. During the first nine months of that year, the company’s Rhode Island operations accounted for $33.8 million of the insurers’ $75.4 million in losses.

In the recent interview, Baker described the Rhode Island departure as “brutal,’’ and the toughest action he had to take in his multipronged plan that turned Harvard Pilgrim around.

“It was one of the things where, if people had started to make the changes that needed to be made two or three years previously, I think it might have been salvageable,’’ Baker said. “By the time I got there, I don’t really feel like we had much of a choice.’’

Things got even rockier for Harvard Pilgrim after that. Baker’s new team discovered a $58.5 million accounting error that pushed the company’s projected losses to over $200 million in 2000. The company alerted Massachusetts regulators, who placed the insurer into receivership for five months, a move similar to bankruptcy. The state maintained more limited financial oversight over Harvard Pilgrim until 2006, but the company did not receive taxpayer dollars as part of the state assistance.

Other dramatic actions would follow. The company hit customers with double-digit price hikes after years of modest increases. And as nearly half its 1.3 million customers dropped the plan, Harvard Pilgrim cut its employee head count by 50 percent over the next two years. Roughly half of its 4,000 employees either lost their jobs, left on their own, or were outsourced, many for lower pay, to a company owned by Texas billionaire and former presidential candidate Ross Perot.

Bringing a company back
It was during the dark days that Baker began what would become a tradition for company employees — his Friday e-mails. Often punctuated with references to his beloved , lyrics from his favorite punk rock band, the Ramones, or inspirational stories he had heard, Baker would detail the company’s upcoming goals and celebrate employees’ notable achievements.

“He was a genuinely inspirational leader,’’ said John McDonough, a former Democratic state representative and a Patrick supporter who was appointed to the Harvard Pilgrim board of directors while it was under state receivership. “The people who worked for him, just about every one of them would lie down on Route 128 during rush hour for him.’’

Baker insisted on excellence, employees said, though he was not unreasonable. He had an open-door policy and an uncanny ability to remember not only their names but important events in their lives.

It would be far tougher for Baker to win over physicians, hospitals, and customers. But since 2005, Harvard Pilgrim has been voted the top health plan in the country by the National Committee for Quality Assurance, a major accrediting and standards-setting organization. Its rankings are based on criteria including communications with patients and how well companies follow national quality of care guidelines for everything from cancer screenings to diabetes management.

Health care providers who once dreaded dealing with Harvard Pilgrim because it took forever to get paid now say it is the best insurer to deal with. Joe Kirkpatrick, a senior vice president at the Massachusetts Hospital Association, said that Baker listened to criticism and created the first password-protected online system among Massachusetts health insurers that allowed physicians to track payments, check patients’ benefits, and send the company feedback.

Baker points to that metamorphosis as part of his game plan for state government, if elected. He said he would relentlessly “chase efficiency’’ and reduce the state workforce by consolidating agencies that perform similar functions but have computer and billing systems that don’t communicate with each other, giving as an example several housing programs in the Health and Human Services Department.

But Harvard Pilgrim under Baker’s leadership had an unremarkable track record for managing its administrative costs. Data from the Division of Health Care Finance and Policy show that from 1999 through 2008, the company spent about 11 cents of every premium dollar collected from consumers on administrative expenses, slightly higher than the 10.4 cents average during this time period for other Massachusetts insurers.

By the time Baker left in July 2009, however, the company was in the black, with a net income of $52.3 million in his last full year. For engineering the turnaround, the chief executive was richly rewarded. His total compensation in 2008 was $1.7 million, and he made $1.3 million in just seven months in 2009. That was roughly in line with what the executives of the two other major health insurers in the state made.

Not focused on health care
Baker, usually an outspoken sort, was not an active participant in the debate that led up to passage of Massachusetts’ landmark health insurance overhaul law in April 2006, health advocates say. One notable exception was a June 2005 op-ed piece he coauthored in the Boston Herald with then-Senate president Robert E. Travaglini.

He became more vocal after the law passed, launching a blog in 2007 called Let’s Talk Health Care. The insurance executive frequently pounded out his thoughts on how to control soaring health costs, retool the state law, and improve quality. But as a candidate, he’s become relatively silent again on these subjects, even as the governor imposed caps on the rates insurance companies charge small businesses and individuals.

“When Deval Patrick goes after the insurers and providers, he knows he is challenging Charlie’s legacy, so where is Charlie on Charlie’s legacy?’’ said McDonough, the former state legislator. “One would think that would be his strong suit, where he would have the most articulate and thought-through positions.’’

In an interview, Baker said that he’s not avoiding the topic, but that health care is “not primary in most people’s minds.’’

Pressed on the issue, Baker said his top priority would be transparency. Requiring providers to publicly post their prices, he said, would help close large discrepancies in what hospitals and doctors charge for services.

It’s a phenomenon that Baker himself helped bring about.

As state health and human services secretary in the 1990s, he approved the merger of Massachusetts General and Brigham and Women’s hospitals to create Partners HealthCare, which has since become a Goliath in Greater Boston’s health care market.

Partners is one of a number of Massachusetts hospital companies that, because of reputation, specialized services, or geographic isolation, has the clout to demand higher prices from insurers. Baker learned this firsthand when in 2001 he reluctantly agreed to steep fee increases for Partners because employers wouldn’t choose health plans without Partners’ hospitals and doctors. The cost was passed on to Harvard Pilgrim’s customers.

During Baker’s last six years at Harvard Pilgrim, the company’s average monthly premium increased faster for its HMO customers than the premiums of similar plans offered by its chief competitors, according to available data from the state Division of Insurance.

For another type of product, called point of service, Harvard Pilgrim’s rate increases during this period fell in the middle of the pack.