N.H. still not showing up on Palin’s radar 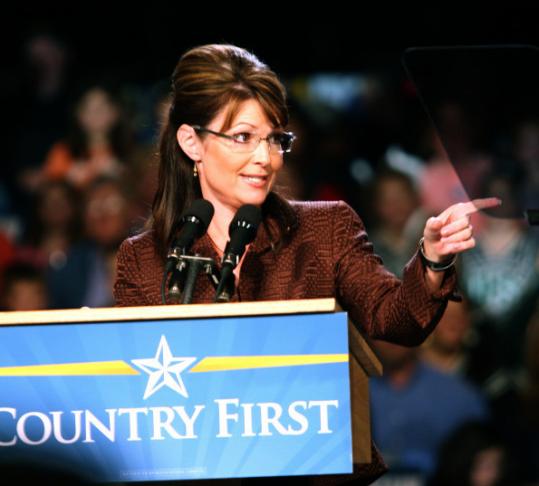 WASHINGTON — Sarah Palin seems to be everywhere these days. She stars on her reality TV series, pontificates on the Fox News Channel, tours the country making speeches and endorsements, and conspicuously cheers her daughter’s appearances on “Dancing with the Stars.’’

But as Palin launched a book tour this week in what is widely seen as a test run for a presidential bid, one stop is notably missing: the first-primary state of New Hampshire.

Palin’s decision to bypass the Granite State — as she did during this year’s elections and on a book tour last year — has surprised those who monitor prospective candidates for telltale clues of presidential intentions. And many possible contenders are already making multiple stops in New Hampshire.

“The longer you stay away, the more conspicuous it gets,’’ said Fergus Cullen, former chairman of the New Hampshire Republican Party. “Part of what baffles me is she’s been doing political events in other states. She’s gone to Iowa, and she’s spoken at party committee events in Oklahoma, Florida, and Oregon. It’s not like she’s got a blanket prohibition on these sorts of things’’

Palin did not return e-mail and phone messages yesterday, but her publisher said it’s all about demographics and dollars.

“The cities on the book [tour] were chosen based on where we have strong retail accounts and where Harper believes Governor Palin’s fans are strong,’’ said Tina Andreadis, a spokeswoman for HarperCollins. “We have a limited amount of time to conduct this tour, so we want to maximize the attendance at all the events.’’

But that comment, which is bound to attract notice if Palin seeks presidential votes in New Hampshire, comes as the former Alaska governor visits other locales considered important in a presidential bid.

Her nine-day, 16-stop tour to promote her new book, “America By Heart: Reflections on Family, Faith, and Flag,’’ began yesterday in Phoenix. Stops include a Sam’s Club in Little Rock, Ark., a Costco in Brentwood, Tenn., and a Kroger Marketplace in Cincinnati.

She also has two stops in the first-caucus state of Iowa — at a in Spirit Lake and a Borders Bookstore in Des Moines — and will end the tour at a in Columbia, S.C., the capital of a state that traditionally holds a primary shortly after New Hampshire.

The last time Palin went to New Hampshire was one day in October 2008, when as the GOP vice presidential nominee she appeared in three well-attended rallies in Dover, Laconia, and Salem. In April, she came to Boston for a Tea Party rally but skipped the one in Concord, N.H., the previous day.

Earlier this month, when the Tea Party Express bus tour held an election-eve event in Concord, N.H., she wasn’t on that portion of the trip. She endorsed former attorney general Kelly Ayotte during Ayotte’s successful primary run for US Senate but never came to the state on her behalf.

It is still early in the presidential nominating contest, and no Republicans have announced their candidacy. But Palin’s absence is in stark contrast to the amount of activity from other potential candidates.

Governor Haley Barbour of Mississippi and Governor Bobby Jindal of Louisiana were each in the Granite State last month to campaign for John Stephen, the GOP nominee for governor. Newt Gingrich, the former House speaker, and Mike Huckabee, the former Arkansas governor, have also visited in the past year.

Rick Santorum, the former Pennsylvania senator, is planning to attend a dessert and coffee event next Monday hosted by the Goffstown-Weare Republican Committee, his second trip to the state this month. Governor Tim Pawlenty of Minnesota has made appearances at picnics across the state and wrote an editorial in the Union Leader earlier this month. Mitt Romney, the former Massachusetts governor, has a home in Wolfeboro that he has used as a base of operations as he considers another run.

“The speaker’s bureau director for some county committee is saying ‘How do I even get a hold of Sarah Palin’s committee? How do I send an invitation?’ ’’ Cullen said. “Whereas other candidates are contacting them.’’

In New Hampshire, 39 percent of Republicans said that Romney is their likely choice in the presidential primary, according to exit polls done by CNN on election night earlier this month. Palin got 18 percent, Huckabee 11 percent, and Gingrich 8 percent. And 19 percent said they would back someone else.

Palin’s sense of independence and unpredictable nature can appeal to New Hampshire voters.

“It’s wide open right now,’’ said Dave Carney, a longtime GOP operative from New Hampshire who was the White House political director for President George H.W. Bush. “If she invested the time and the resources in New Hampshire, she has a message that would sell quite well.’’

During her speeches in New Hampshire on Oct. 15, 2008, before the presidential election, Palin made a direct appeal to voters, praising the natural beauty of their state and likening it to her home state.

“You’re a lot like the people of Alaska,’’ she said at one point, then suggested Alaska borrow the New Hampshire motto of “Live Free or Die.’’

But New Hampshire is not as religious or as socially conservative as portions of Palin’s base. Her endorsement during the Republican primary — choosing Ayotte over more conservative candidates who had Tea Party backing — also rubbed some Republicans the wrong way.

“She stuck her nose in our elections, and we didn’t like that,’’ said Jane Aitken of Bedford, N.H., who is active in the state’s Tea Party movement. “I like her, but she should not have done that. This stupid Tea Party Express bus came here. We’re kind of independent here, and we’re the original Tea Party from 2007.’’

Palin’s new book addresses a range of topics, including “American Idol,’’ some of Palin’s favorite movies, and Jeremiah Wright, the controversial former pastor of President Obama.

In a chapter about faith in public life, Palin wrote that Kennedy “essentially declared religion to be such a private matter that it was irrelevant to the kind of country we are.’’

“His vaunted speech didn’t represent a successful reconciliation of faith and public office, but an articulate and unequivocal divorce of the two,’’ she wrote. “It is perhaps not surprising, in light of this fact, that his brother Ted Kennedy would go on to have a long career advocating positions directly at odds with his Catholic faith (which was by all accounts sincere).’’

Palin went on to praise Romney, who is Mormon, for not “doing a JFK’’ during his 2008 presidential campaign.

“The difference is striking: where Kennedy seemed to want to run away from religion, Mitt Romney forthrightly embraced it,’’ she wrote.

Palin quoted extensively from a speech that Romney delivered in December 2007, one that his campaign hoped would make clear that Romney would keep his politics separate from his religion, much as Kennedy did.

Romney, who could be a future political rival of Palin, put a message on Twitter this week thanking her “for the kind words in your new book about the role of faith in public life.’’

Graphic Palin book tour
Your comment is subject to the rules of our Posting Policy
This comment may appear on your public profile. Public Profile FAQ