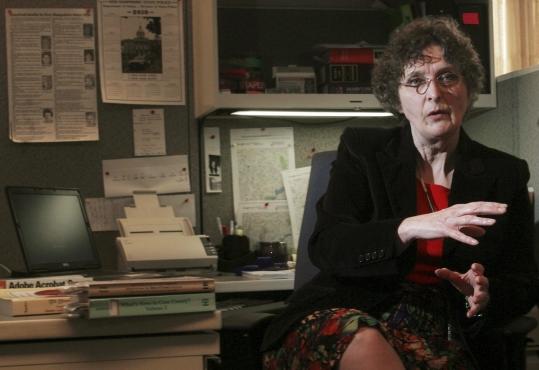 She pores over decades-old police reports and handwritten notes. She creates interactive databases for the team, and she has discovered patterns and lies that could prove vital as detectives move forward.

She does all this work for free.

And “with a hundred-and-something cases left to go, I definitely think I have job security,’’ she said.

Senior Assistant Attorney General Will Delker, who heads the unit, certainly hopes so.

“She’s invaluable,’’ said Delker. “I frankly don’t know where we’d be without her assistance.’’

In December, Governor John Lynch signed into law the bill that created the unit, but it did not fund a paralegal position.

Knudsen fills that void, and she is passionate about the work.

“After I left teaching, I was kind of a rudderless ship,’’ said Knudsen, 56, also a veteran archivist and genealogist. “I wanted to use my brain.’’

She is fascinated by records and meticulous in her research. Since her retirement from the Londonderry School District, she has organized archives of counties and the state, again as a volunteer.

She has compiled a half-dozen books published by Heritage Books. One, based on a fragile prison ledger, details the lives, crimes, and victims of state prison inmates from 1812 to 1883. Another chronicles paupers’ pleas for assistance in Cheshire County from 1885 to 1900.

While Knudsen was volunteering at the state archives, a colleague flagged a December newspaper article about the Cold Case Unit. Knudsen read the story and was amazed to learn how many murder cases had gone unsolved.

“I’m driving home and I thought to myself, ‘They’ve had all this time to work on those cases. They’re missing something. What are they missing?’ I was so wrapped up I went through the toll booth and don’t remember it,’’ she said. “I concluded they would need a very involved database, one that’s indexed for every person, every place, every interview.’’

That night she tracked down Delker’s name and state e-mail address. She told him about her experience and offered to volunteer. Three weeks later — after a criminal background check and vetting of her references — Knudsen joined the team.

“She came in with training in organizing and indexing, which was the gap we couldn’t fill,’’ Delker said. “She’s essentially working a full-time job for free.’’

Delker’s gain was state records manager Nelson Burford’s loss. “We didn’t want to give Milli a good recommendation when they asked, but we kind of had to,’’ said Burford, who oversees the state archives. “It’s my hope that very soon they solve all their cold cases and she comes back to us.’’

Knudsen is midway through her third case and has studied and scanned 1,458 pages of documents. She distills each document into a summary on a computerized spreadsheet, with links back to the full document. Some are scribbled notes from investigators — a note to call a certain person that wasn’t followed through, or a call made to a different police department.

“Why was he calling this other police department?’’ Knudsen thinks out loud, without revealing the case she’s referencing. “Sometimes that’s the missing link. Let’s face it. That’s what we’re looking for.’’

She also retrieves old newspaper articles about the cases and has detected instances where witnesses told investigators they learned their information from the newspaper, but the story containing those details was published days later.

While doing the research, she learned that one of her former students in Londonderry, Mindy West, is on the cold case list. West disappeared in Manchester in 1998 at age 31. She was found two months later, strangled and tied to a tree.

Knudsen’s recent summary of a graphic description of a crime scene was upsetting. On the drive home to Milford she began visualizing the scene and thought she’d have nightmares. By the time she arrived home, she had calmed down.