Mercury could climb to 101, setting a record and making for some unhealthy conditions 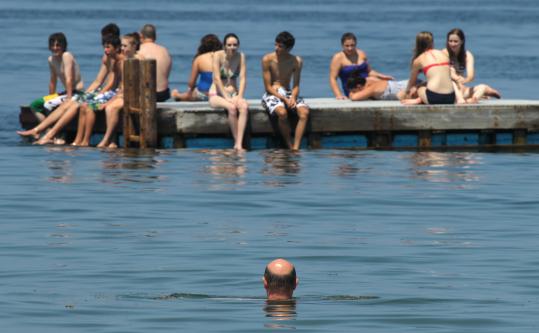 On days like Tuesday, when forecasters predict temperatures could crest 100, historical reenactor Tom Dietzel may wish this country’s founders had embraced a more casual dress code.

“Men in the 18th century didn’t take off their coats,” the 24-year-old tour guide said Monday, standing on Boston ­Common in a faded blue overcoat and tri-corner hat. “And out of ­respect for that, neither will I.”

Other Bostonians, however, will probably take advantage of more modern fashion standards Tuesday, as forecasters expect temperatures to approach or even shatter the city’s record for the day: 98 degrees. The National Weather Service said the high could climb to 101.

The extreme heat will persist through midday Wednesday, when a cold front is expected to usher in showers and possible thunderstorms.

“Once this cold front comes through Wednesday, it will definitely be a welcome change, unless you like hazy, hot, humid conditions,” said Kim Buttrick, a meteorologist with the National Weather Service in Taunton.

Mayor Thomas M. Menino of Boston issued a heat advisory, urging residents to drink water, limit outdoor activity, and seek out the city’s pools and air-conditioned community centers Tuesday, which could be the hottest day of the year so far.

Children and the elderly face the highest risks of heat-related health problems, the advisory warned.

Those who have to spend time outdoors would do well to follow the lead of Dietzel and several others on Boston ­Common Monday who found ways to frame the heat positively.

Dietzel, who takes part in ­re-enactments when he is not guiding tours through the city, insisted he had no complaints about working outside in his overcoat.

Across the Common, Matt Daley sipped a pink slush behind the Italian ice cart he tends. The 26-year-old worked for four years as an estimator for a construction company, and he said even with the heat, his current job has advantages.

“I’d rather be standing outside,” the Needham resident said, “than sitting behind a desk at a cubicle.”

For some on the Common, Monday’s heat, which hit 88 ­degrees at midday, was hardly impressive.

Sitting by the sunglasses stand where she is working for the summer, Maricruz Wilson said her home state of Sonora, Mexico, makes Boston’s summer look mild.

On a shaded bench nearby, Shawn Fisher sat barefoot, with her shoes tucked behind her.

The Beverly resident provides academic coaching for college-bound students from an office in Downtown Crossing. But seeking a brief break, she walked to the Common, work papers in hand.

“I needed to escape the air conditioning, oddly enough,” she said.

In the city’s heat advisory, ­officials urged residents to take caution if they are engaged in outdoor activity.

“Make sure to drink plenty of water and find a cool, shady spot to rest if you find yourself getting too hot,” Barbara Ferrer, executive director of the Boston Public Health Commission said in a statement.

Daysi Hernandez of Chelsea, tending a stand that sold cold drinks and Italian ice, offered this:

“Dress as comfortably as possible,” she said.

Nearby on the Common, Jim Casey, 53, spent his lunch break sitting on a bench. Casey, who has worked in construction for 30 years, provided another tip.

“Don’t be a hero,” Casey said. “A lot of guys try to do too much. They think they’re ­Hercules or something.”