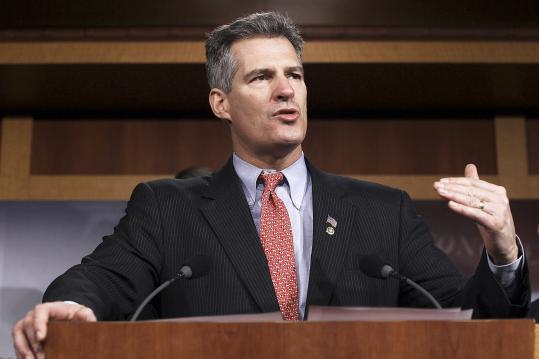 First, it was kings and queens. Now, it is heads of state — and the secretary of state.

During a CNN interview that aired Tuesday, Senator Scott Brown said that President Obama and other powerful Democrats are regularly phoning him to get help passing their legislation.

Bipartisanship is a bedrock theme of Brown’s hotly contested reelection campaign, as the Massachusetts Republican tries to fend off a challenge from Democrat Elizabeth Warren.

“I can name a litany of Democratic-sponsored bills that I’ve done that never would have passed hadn’t it been for me,” Brown told CNN. “And the president had called me, and vice president calls me, and Secretary [of State Hillary Rodham] Clinton calls asking for my vote all the time.”

In reality, Brown’s staff says he has spoken by phone with Clinton just twice during his Senate career — most recently over a year ago, on July 5, 2011.

The other call occurred in December 2010, when the Obama administration was seeking votes to pass the New START Treaty.

Brown and Clinton have spoken in person twice, when the secretary addressed a group of senators on political uprisings in Egypt and Libya. Those sessions were over a year ago, in February 2011 and March 2011.

The contrast between Brown’s comment and his office’s records recalls a similar statement he made in another recent media interview.

“Each and every day that I’ve been a United States senator, I’ve been discussing issues, meeting on issues, in secret meetings and with kings and queens and prime ministers and business leaders and military leaders, talking, voting, working on issues every single day,” Brown said June 21 during an interview on WTKK-FM’s “Jim & Margery Show.”

An aide later said he “misspoke when he said ‘kings and queens,’ ” and Brown himself clarified he meant to say he has regular meetings with representatives of such monarchs.

In response to questions about the most recent comment, Brown’s staff says he has spoken with the vice president by phone just once. That happened around December 2010, when Biden joined Clinton in trying to round up votes for the New START Treaty.

The two have also met face-to-face at least twice, first in February 2010, when, in his capacity as president of the Senate, Biden swore in Brown. They also met in March 2010, when the vice president gave the then newly elected senator a tour of the White House and hosted him for lunch.

As for Obama himself, Brown’s staff says the two have spoken by phone just once, in April 2010, when he called the senator from Air Force One to discuss immigration policy and seek his support for the Dodd-Frank financial regulation act.

But the president also hosted Brown in June 2010 for a face-to-face talk in the Oval Office. It was both a get-to-know-you session and a discussion of a variety of policy matters.

And the two have also seen each other on eight other occasions, as Brown attended bill-signing ceremonies, buttonholed the president as he left the State of the Union address, or, in September 2010, as the Boston College hockey team visited the White House after winning an NCAA championship.

In a statement, Brown’s staff made his point in slightly more generic terms.

“As the second-most bipartisan senator in the country, Scott Brown has met with and talked to President Obama and his team on a number of issues in the past, and will continue to do so in the future,” said campaign spokeswoman Alleigh Marre.