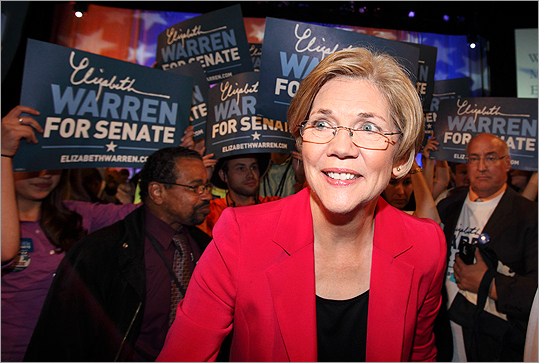 Since September, she has hauled in nearly $16 million, more than any of the 1,613 candidates officially running for Congress on the March deadline, according to the Center for Responsive Politics.

What sets her fund-raising effort apart, and has helped her raise cash at almost twice the rate as Brown since entering the race, is the deep devotion she commands from the left flank of the Democratic Party. Many view her unbending critique of Wall Street as a rejoinder to the Tea Party and her toughness as an antidote to what they see as President Obama’s tendency to compromise.

“You don’t often hear a candidate talk that directly about taking on corporations in her stump speech,” said Stephanie Taylor, who cofounded the ­Progressive Change Campaign Committee in 2009. The group, which tries to elect liberals even against incumbent Democrats, has raised more than $740,000 for Warren, more than any other candidate.

Polls show the number of voters who view Warren un­favor­ably ticked slightly upward between March and May, as she struggled to explain why she listed herself as a Native American in a legal directory, even though she lacked documentation. But there was no sign of concern when she spoke earlier this month at the ­Netroots Nation conference in Providence. Warren was chased by admirers and greeted by dozens of cellphone cameras at the gathering of about 2,700 liberal bloggers and ­activists.

Her fund-raising network is bolsteredby these diehard ­activists and their followers. Yet it includes donors at every level of Democratic politics, includ­ing mainstream party leaders motivated to retain control of the Senate; the elite from Hollywood, Boca Raton, and Wellesley who give maximum $5,000 contributions; and $125 house party guests in Watertown.

Though Brown is not raising money as fast as Warren, he still has more cash available, the result of $7 million left over from the 2010 special election, plus the $11.9 million raised over the last two years.

Before Warren entered the Senate race, when she was explor­ing a run, she privately reached out to key people with access to a national web of ­donors. Among them were ­Barbara Lee, the Cambridge philanthropist who promotes female Democrats around the country; Stephanie Schriock, president of the EMILY’s List political action committee that also supports Democratic women and has since raised $880,000 for Warren; and Paul Egerman, a retired software entrepreneur who now chairs Warren’s finance committee.

Egerman said he met ­Warren when he happened to sit across the aisle from her on an airplane a few years ago. His son had been her student at Harvard Law School, and he was familiar with her advocacy on financial regulation.

Egerman said it was a poten­tially awkward moment for him, when he tapped her shoulder.

It was a lucky tap for ­Warren. Egerman is part of the “Patriotic Millionaires” group of very wealthy Americans who are urging higher taxes on themselves, following the lead of Warren Buffet.

The fund-raising committee convenes every morning at 8:30, by telephone. On the call with Egerman are Shanti Fry, a wealthy activist from ­Cambridge who cochairs the ­finance committee; Mindy ­Myers, Warren’s campaign manager, who ran two previous Senate campaigns and who served as Obama’s 2008 New Hampshire director; Michael Pratt, Warren’s national ­finance director, who worked for Obama in 2008; and ­Colleen Coffey, the Massachusetts finance director who worked on the Senate campaign for Attorney General Martha Coakley in 2010.

Egerman says they spend most of the call juggling what has become a vast apparatus: keeping track of who has request­ed to host fund-raising events, deciding which ones to accept, listing whom Warren needs to personally thank. Warren’s schedule has become so busy, he said, that she has begun deploying surrogates, including her policy advisers and former governor Michael Dukakis, at some fund-raising events.

Her campaign also purchased the fund-raising list used by Hillary Rodham ­Clinton, which helped propel Clinton in her Senate and presidential campaigns.

Warren’s team does not ­release her fund-raising schedule. She has drawn unflattering attention for raising about 59 percent of her itemized contributions from out of state. Brown has not raised as much money outside Massachusetts in this election, but in the fever­ish final days of the 2010 special election, more than 70 percent of his itemized contributions came from out of state.

The Warren campaign said that by next week she will have held a total of 40 events outside Massachusetts and 85 in the state, an average of nearly one every other day, though she ­often strings several together.

She has held fund-raisers in Hollywood, New York, and other wealthy enclaves. She even used a trip to her native Oklahoma, where she was receiving an award in November, to hold a fund-raising breakfast at a downtown hotel in Oklahoma City.

Most senate candidates spend hours on the telephone asking for money. The Warren campaign downplays that ­aspect of her schedule. Egerman said most of her fund-raising work involves showing up and thanking hosts by telephone. When she speaks to groups, she often asks for money toward the end of her talk, with a fairly subtle sell, saying she is up against a well-financed incumbent and will need the resources to compete with him.

Warren also cultivates activist groups with special conference calls to their members and sessions with their leaders.

More than $2 million of Warren’s money was raised by these activist groups, including $185,000 from the Daily Kos, a liberal website, and $240,000 from Democracy for America, founded by Howard Dean to provide training and organizing for liberal candidates.

Warren’s fund-raising letters, usually signed by Myers, tend to be based on current events in the race. When the candidate gets attacked, the campaign often considers it a good day to raise money. The day after the National Review retracted an erroneous report that she had plagiarized passages in a book, Myers asked supporters for a minimum $5 to “show Elizabeth you have her back.”

Tough news stories about Brown, or his votes on controversial issues, are also grounds for asking for money, including anything that ties him to Wall Street, “big oil,” or Mitt Romney, favorite bogeymen of the fund-raising machine.

Those who give to Warren praise her for some of the qualities that Brown criticizes. In describing her, they use words like fighter and uncompromising, words that contrast with Brown’s emphasis on stepping across the aisle to break Washington gridlock.

“She doesn’t give in,” said John Petrowsky, a realtor from Watertown who is cohosting a fund-raiser scheduled for Thursday night at his house with a suggested contribution of $125 to $500. “She doesn’t change her politics to suit whatever the mood is of the crowd she’s addressing.”

“She was exactly what I hoped she would be,” said Joan Ridder Challinor, an 85-year-old historian and newspaper heiress from Washington D.C., who gave $5,000. “Strong, talking about things as they are. There’s very little of that going on today.”

Nearly every top-level Democratic bundler — big-time ­donors who collect checks from other wealthy donors — in Massachusetts is helping ­Warren. And Warren’s political celebrity has added a new ­dimension to their ability to gather checks.

In April, Beth I. Z. Boland, a former president of the Massachusetts Women’s Bar Association, and Micho Spring, a public relations executive and chief of staff to Boston’s former mayor, Kevin White, were asked to throw together a luncheon for Carole King, the singer-­songwriter, who had called the campaign volunteering to help. She would be in town to speak at the Kennedy Library and had a small window.

Matthew Carroll of the Globe staff contributed to this report. Noah Bierman can be reached at nbierman@globe.com.