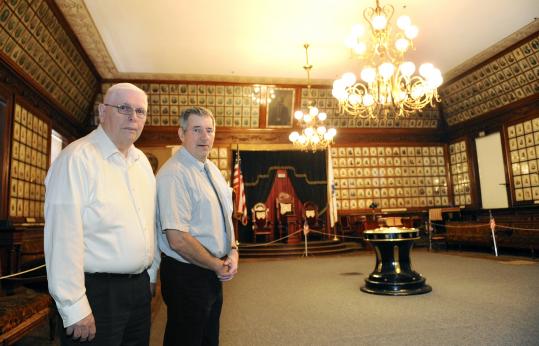 If you look hard enough, reminders of the Civil War era are spread throughout Lynn. They include the homes where abolitionist leader Frederick Douglass lived; the Civil War Monument, dedicated to the 283 Lynn soldiers who died in the war; and the Grand Army of the Republic Post #5, now an ornate museum where some 2,000 veterans met regularly following the war to network for jobs, receive medical care, and lobby for federal pension benefits.

For the next four days, these sites will be on display as the city, along with several other organizations, marks the ongoing 150th anniversary commemorations of the Civil War, which extended from 1861 to 1865.

For the next two days, Michael Crutcher, a Douglass impressionist, will visit Lynn schools and speak on his efforts to end slavery. Tonight, Crutcher and James Getty, an Abraham Lincoln impressionist, will discuss the war at the Grand Army of the Republic post.

Tomorrow, Crutcher and Getty will visit the Chelsea Soldiers Home, and, later in the day, a banquet will be held to commemorate the war at the Lynn Masonic Lodge. On Saturday an Sunday, Civil War reenactors will set up encampments along Lynn Common. Also on Saturday, buses will leave Lynn Common to tour the city’s Civil War-related sites, and will pass by Douglass’s home sites.

Dexter Bishop, a Lynn native who helped plan and coordinate the events, hopes the anniversary will be an opportunity for people to incorporate history into their lives. He called the Civil War a turning point in America’s history, and believes the volunteerism showed by the thousands of men who enlisted in the Union Army is still reflected in today’s Lynn. “The Civil War reshaped this country from being a North and a South to the nation we eventually evolved into,” said Bishop, a retired investigator who spends many of his days volunteering at the Grand Army of the Republic post.

The post sits in downtown Lynn, on the edge of Market Street, in a four-story brick building. Built in 1885, it was once one of the busiest destinations on the North Shore, with thousands of veterans crowding into its rooms, seeking assistance following the war. The organization was the first national fraternal veteran’s group in the country, and the post was the fifth built in Massachusetts, where eventually 210 would stand. These days, Lynn’s GAR post is one of 13 remaining in the country and is used as a museum. Among its artifacts is an original note signed by Lincoln in the early days of the war, a cannonball from the Battle of Spotsylvania, and one of the last Confederate flags to fly over Richmond during the war.

The museum’s centerpiece is the post’s original meeting room, where 1,243 portraits of veterans line the walls and hang opposite the capstan from the USS Kearsage, the ship that defeated the Confederate cruiser the Alabama in a battle off the coast of France in 1864. William Poole, who lived in Lynn and steered the Kearsage during the battle, is one of three former Lynn veterans awarded the Medal of Honor during the war. The others are John G.B. Adams and Benjamin Franklin Falls, who was killed during the battle of Gettysburg. In addition, two other veterans whose photographs can be found in the room, Joseph H. Butler and John Stackhouse, fought in the 54th Massachusetts Volunteer Infantry. That was the first all-black regiment, and it was featured in the movie “Glory.”

More than 100 years ago, men regularly met in the hall and argued over everything from politics to law. “You could be fined for swearing at those meetings,” noted Bob Matthias, the museum’s curator. According to Matthias, other veterans who attended meetings included Lynn’s first police chief, Thomas Burckes, and Roland Greene Usher, who was elected mayor of Lynn in 1866.

The anniversary will also focus on Lynn’s role as a center for abolitionism, which inspired Douglass to move to Lynn and write “A Narrative of the Life of Frederick Douglass, an American Slave” in 1845 in the city. During the 1840s, Douglass lived in three homes and all three no longer exist. They stood on Harrison Court, Newhall Street, and near the corner of Baldwin and High streets.

On Sunday, there will be a walking tour of the abolitionist graves at Lynn’s Pine Grove Cemetery. Recently, Juliet Greene, one of the anniversary’s volunteers and an instructor at North Shore Community College, helped start an Abolitionist Memorial Ribbon Project. Last week, volunteers from Lynn schools and the college decorated about 100 graves with ribbons.

Greene began the project to preserve the rich history of abolitionist leaders such as Douglass, William Lloyd Garrison, Abby Kelly Foster, the Hutchinson Family Singers, the Grimke sisters, and Wendell Phillps.All had city roots or visited frequently. She said hundreds of abolitionists are buried in the cemetery.

“I hope to have about 500 graves identified by 2015 so that the ribbon project can be really impactful,” she said.

For more information about the anniversary events, visit lynncivilwar150th.webs.com. Steven A. Rosenberg can be reached at srosenberg@globe.com.