State may require reviews of impact before construction 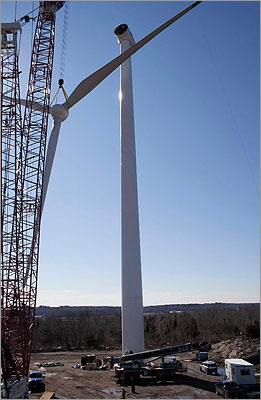 (Jessica Bartlett for The Boston Globe) This wind turbine in Scituate received its crowning piece in February 2012 as the hub and blades were lifted up and attached to the nacelle. The turbine, which will undergo testing before it begins generating electricity sometime this spring, stands at 400 feet tall from base to blade tip.
By David Abel Globe Staff / May 21, 2012
Text size – +

Days after state environmental officials found unacceptable noise levels from wind turbines in Falmouth, they are considering new regulations that would require the state to review potential noise issues before wind turbines are built in Massachusetts.

The state might also conduct sound studies in other communities, such as Fairhaven and Kingston, where residents, as in Falmouth, have complained about newly installed turbines, officials said.

A panel of independent scientists and doctors, convened by the state to look at the effects of wind turbines on the health of nearby residents, urged the state several months ago to require future wind projects to be reviewed for noise levels before they are built and to develop a program to monitor the sound after they begin operating.

“In light of those recommendations and the results of recent sound measurements we took in Falmouth, we are giving serious consideration to implementing additional procedures to limit noise impacts,’’ said Kenneth Kimmell, commissioner of the Department of Environmental Protection.

Kimmell said new regulations might require manufacturers to provide the operators of future turbines with the expected sound levels they would generate. The state would then use computer models to predict the noise at various distances, based on wind speeds, weather, terrain, and other factors.

Kimmell called such modeling “standard practice’’ for other types of large noise generators, such as power plants that use fossil fuels. He said that the state has mainly left such testing to local permitting boards, only getting involved when there was an issue raised about the effects of construction on wetlands, landfills, or other protected areas.

In Falmouth, the state found that a turbine that increased noise levels by 10 decibels or more at a home less than 1,500 feet away was unacceptable. As a result, for the first time since state officials began promoting wind power as a way to reduce harmful greenhouse gases that trap heat in the atmosphere, they urged the shutdown of a turbine until they complete further testing.

The Falmouth findings have given ammunition to increasingly vocal opponents of wind power, who have sought to slow the Patrick administration’s efforts to produce 2,000 megawatts of wind energy - three-quarters of it from offshore sources - by 2020, up from about 59 megawatts available today. The state’s goal is to build enough wind turbines to power about 800,000 homes.

Officials last week said that all but one of the 54 wind turbines of 100 kilowatts or larger that are operating in Massachusetts are within a mile of homes. Of those, 17 turbines, including the two in Falmouth, use an older generation of technology that makes them louder.

“I think it’s a great idea that all wind turbines are tested before they’re built or permitted,’’ said Eleanor Tillinghast, a steering committee member of Windwise Massachusetts, which has opposed wind projects around the state. “The problem is that the state’s testing doesn’t capture the infrasound, what you can’t hear, which is what’s affecting the body.’’

Tillinghast and other wind power critics say churning turbines and resulting flickering light and vibrations from infrasound - low-frequency sound waves below the range of human hearing - can produce dizziness, nausea, depression, or anxiety, a set of symptoms they call “wind turbine syndrome.’’

The panel convened by the Department of Environmental Protection found there is no rigorous research to back up the claims of those who say they are experiencing wind turbine syndrome or that low-frequency sounds can cause detrimental health problems. But the panel found limited evidence that a “very loud wind turbine could cause disrupted sleep, particularly in vulnerable populations, at a certain distance.’’

Kimmell said his staff is sifting through the panel’s recommendations and copious public comments, a process he said would take months, if not longer, before the state establishes testing and modeling guidelines.

“We’re evaluating all the evidence on infrasound, and whatever our evaluation leads us to, we’ll do,’’ he said. “We’re actively looking at this, and we have a huge amount of information to sort through.’’

With many wind projects stalled by lawsuits or permit appeals, administration officials have pushed for legislation that would provide for a new regulatory scheme for wind turbines, shifting some permitting powers from local to state agencies and streamlining the state’s appeals process. But the so-called wind-siting legislation has been stalled in the Legislature for several years, as local officials worry about the state usurping their authority.

“Had the bill been enacted, the state would have been charged with establishing statewide standards to protect public health, and there would have been greater state oversight of the individual siting decisions,’’ Kimmell said.

Geoffrey Beckwith, executive director of the Massachusetts Municipal Association, which has opposed the wind-siting legislation, has no problem with the state ensuring that future turbines are not increasing noise pollution to intolerable levels.

But he said he worries about state rules that might hem in communities.

“Municipalities would be very cautious about any attempt on the part of the state that could override local decision-making,’’ he said.

In Fairhaven, where two 1.5-megawatt turbines began operating this month, neighbors who have long criticized the project said they have already found it hard to sleep at night.

John Methia, who lives about 2,000 feet from the turbines, said he no longer sleeps with his windows open. “The sound is pretty much unbearable,’’ he said.

But he said he was happy to learn the state is considering conducting sound tests in Fairhaven, where he and neighbors have been trying to raise money for similar tests.

“The siting of these things in residential neighborhoods is absolutely ridiculous,’’ he said. “I found it reassuring what the state did in Falmouth; I hope they’ll do the same kind of testing here.’’