Teardowns on the rise 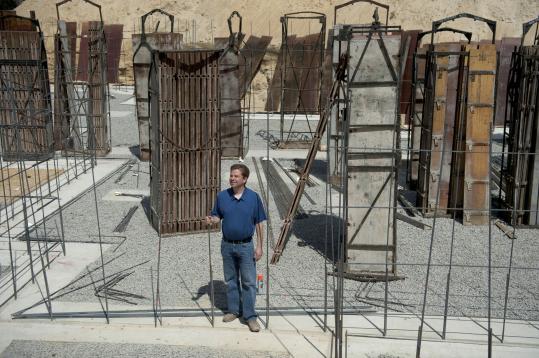 Lexington developer Todd Cataldo, on the construction site for 19 Holmes St., where a new house is under construction. (Gretchen Ertl for the Boston Globe (above and below right))
By Scott Van Voorhis Globe Correspondent / May 6, 2012
Text size – +

Todd Cataldo makes his living tearing down old capes, ranches, and colonials in Lexington and replacing them with much larger, $1 million-plus homes.

And after a modest lull during the recession, business is booming again.

“They slowed down a little bit during the whole ’08 fiasco, but I just kept building through,” Cataldo said. “Up to $1.4 million on a quiet street, the demand is pretty robust.”

Teardowns are on the rise again in Lexington, Newton, Needham, and Wellesley, with numbers heading back toward previous highs.

A strengthening economy, and a hiring boom by life science and high-tech companies that is drawing more high-paid talent to the area in search of housing, are two big factors driving the resurgence, say town officials, builders, and brokers.

But a dearth of developable land plays a role as well in affluent communities close to Boston.

With teardowns often the only way to build something big and new, developers are scrambling to cut deals for older homes, sending out fliers to homeowners and working with brokers to identify properties before they hit the market, Cataldo and others said.

“This is a very densely populated area,” said Deborah Fogarty, a broker with Coldwell Banker in Lexington. “We don’t have a lot of available land. You have to tear down a house to build a new house. There is no empty land within 128.”

After falling to just 34 in 2010 amid the aftershocks of the recession, the number of demolition permits issued for single-family homes in Lexington bounced back last year to 51. By mid-April of this year, there had been 20 more permits issued, said Garry Rhodes, Lexington’s building commissioner.

“We have never really seen a falloff in demolitions,” Jop said. “Wellesley is a pretty built out community in terms of new home construction. It is teardown/rebuild that we primarily see.”

The surge in teardowns is far from universal, clustered mainly in a few densely developed towns with very high real estate prices.

While prices are also high in more rural towns such as Sudbury and Dover, demolitions can be counted in the single digits, say planning officials in both towns. Both towns still have land to build on, Fogarty said.

But in densely developed communities like Newton and Needham, tearing down the old is the surest way to get a new home.

Newton saw the number of demolition permits fall to 40 in 2009, before rising again to 49 in 2010 and 58 last year, according to the city’s planning department. As of mid-April, 14 permits had been issued this year.

In Needham, residential demolition permits jumped from 58 in 2009 to 82 last year, according to Christopher Coleman, assistant town manager.

“We have seen an increasing trend over the past few years,” Rasmussen said. “The homes that are being rebuilt are slightly bigger or a lot bigger.”

The homes being torn down are not just the typical assortment of modest capes and ranches on slab foundations built in the years after World War II for returning veterans. They now also include colonials from more recent decades and even a Lexington split-level that was about to hit the market for more than $800,000 before Cataldo snapped it up.

He is now in the midst of putting up a $3 million-plus, 6,500 square foot, shingle-style house with six bedrooms and six and a half baths on a three-quarter-acre lot.

Behind the numbers is an influx of executives relocating to the Boston area from other parts of the country, where they lived in newer and larger homes. Instead of settling for a cramped cape or an aging colonial, they are willing to pay up for something new, said Fogarty.

The sellers are typically older, looking to retire or move on after having raised children in the community.

“There is an older population that lives in these small capes,” Fogarty said. “These are not easily saleable to young families who don’t want two bedrooms upstairs and one down.”

Julia Brandon recently bought a house in Lexington with her husband, Nick, a pharmaceutical company executive who was transferred to Cambridge from Connecticut.

The Brandons settled on a $1.2 million home that was once a 1,000-square-foot 1940s colonial in need of work. They wound up paying twice what their 4,000-square-foot Connecticut home sold for, for a house that, at 2,900 square feet, is considerably smaller.

“We knew it would be more expensive but we were still quite shocked,” Brandon said. “Having said that, having looked all around, this house is worth the money. It is an awful lot of money, but it’s very well built and tastefully decorated.”

As the teardown phenomenon gathers steam again, so are concerns that so-called McMansions will change the character of neighborhoods once known for their coziness. But efforts to stop the upscaling of houses have proved largely ineffectual over the years.

Since Wellesley instituted a special review process for super-sized homes in 2008, most new homes built after a teardown are just below the various thresholds that would trigger the rules, Jop said.

More than a decade ago, Needham put into place added setbacks, but then voted to exempt homes on lots 10,000 square feet or smaller, sparing most teardowns from the new rules, said Devra Bailin, the town’s economic development director.

Still, the new surge is triggering complaints, with the Needham Planning Board at the beginning stages of discussing the issue again, said Alexandra Clee, the town’s assistant planner.

Yet, as much as some homeowners might be irked by a teardown in their neighborhood, they don’t necessarily want to close off their options when it comes time to sell their own house.

In Lexington, officials tried and failed to persuade Town Meeting voters in 2002 to approve a large house review system similar to what Wellesley uses.

“People were reluctant to impose rules on their own properties,” said Marynn McCall-Taylor, Lexington’s planning director. “Their home is their biggest investment and they want to be able to get top dollar.”