Menino plays hard to get in Senate race 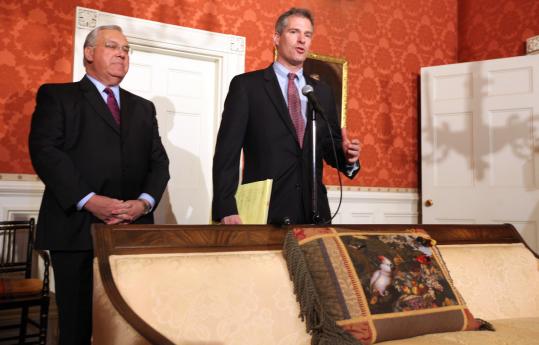 Senator Scott Brown and Menino have had a highly congenial relationship since Brown was elected. (PAT GREENHOUSE/GLOBE STAFF/FILE)
By Andrew Ryan Globe Staff / May 5, 2012
Text size – +

Scott Brown, fresh from his improbable election to the US Senate, knew where his first stop should be: breakfast with Boston’s powerful mayor, Thomas M. Menino.

They seemed an odd couple that morning in January 2010. One was a suburban Republican with fashion model looks, a rising star on the national stage. The other was a big-city Democrat with a style all his own. But facing cameras after eggs and turkey sausage, Menino described Brown as an “old friend.’’

Since then, Brown has regularly called Menino. To run his state office, Brown hired a former Boston city councilor, who knows from experience what it takes to stay on the mayor’s good side. And Brown has made a habit of joining Menino at community events: Last Thanksgiving, they carved turkeys side by side at the Pine Street Inn.

The mayor had gone so far as to declare the Republican senator unbeatable. But that was before Elizabeth Warren, a favorite of the national Democratic Party, entered the race, pulling even with Brown in polls.

Now Menino, whose endorsement is capable of delivering thousands of votes on Election Day, faces a choice: Does he go all out for Warren or hold back, in deference to Brown?

Menino’s personality may mesh with Brown, but his politics align with Warren, a hard-charging consumer advocate. Some of Brown’s votes in the Senate have been at odds with issues dear to the mayor, such as supporting budgets that slashed money for public housing, community health centers, and grants for urban social services.

But Menino has a history of playing hard to get with Democrats running for statewide office. And he has proved in the past that personality can trump party.

Menino has stated outright that he will not break from his party and back Brown. But he has been coy enough about a Warren endorsement - smiling slightly as he gives a noncommittal answer - that people keep asking the question. The real issue is whether Menino will push his get-out-the-vote machine for Warren in November, and how much it matters in a presidential election year when a surge of voters can double the ballots cast in Boston.

“It’s not nearly as important,’’ said Jeffrey M. Berry, a Tufts University political science professor. “But this Senate election could determine who controls that body, so Menino is going to get a lot of pressure from the national Democratic Party to push his machine to help Warren in any way he can.’’

In 2009, when Menino faced his most significant challenge in his five terms, voters cast roughly 111,000 ballots. The year before, when Barack Obama won the presidency, more than 236,000 voters swamped Boston polling places, with 79 percent supporting the Democrat. Brown’s special election in January 2010 fell in between - roughly 154,000 people voted in Boston, with 69 percent supporting the Democrat, Martha Coakley.

In an interview last week, Menino reiterated what he sees as the strength of both candidates. He described Brown as a gifted retail politician who excels at relating to everyday people on the campaign trail, a trait Menino sees in himself. Warren, Menino said, has “great credentials and understands the issues.’’

In previous campaigns, the mayor has not gotten behind a general election candidate until September or October, and an endorsement in this Senate race would be “a long way off,’’ Menino said. He dismissed a question about pressure from Washington to toe the party line, and suggested he has been ignored by leaders of his own party.

“National Democrats don’t call me, that’s for sure,’’ Menino said. “I don’t hear from any of those guys. They know I’m an independent on these issues, and I think what I do politically is best for the people of Boston.’’

That leaves both candidates courting Menino.

“I’m out there working for every vote, including the mayor,’’ Warren said last week at a groundbreaking for an East Boston library. “I call him. Yes, I have put him on speed dial. There are few people who understand politics and elections better than the mayor, and I ask for his counsel frequently.’’

Because Warren does not hold office, political protocol dictated that she had to watch the groundbreaking ceremony from the crowd. When Menino took the stage to speak, he recognized local elected officials in attendance but not Warren.

“This is nothing new on his part, making a Democrat candidate squirm,’’ said Paul Watanabe, political science professor at the University of Massachusetts Boston. “But I think this also reflects somebody who genuinely likes Scott Brown.’’

Brown’s campaign did not respond to several requests to discuss the relationship between the senator and the mayor. The campaign also did not respond to an interview request for Jerry McDermott, the former Boston city councilor who serves as Brown’s state director.

Menino’s most famous showdown with a statewide Democratic candidate dates to October 1998, when he grudgingly endorsed Scott Harshbarger’s bid for governor. Menino and Harshbarger clashed before the campaign, and the mayor had a close relationship with the acting governor at the time, Paul Cellucci, a Republican.

But Menino also had kind words for Charles Baker, a Republican who served in Cellucci’s administration and challenged Governor Deval Patrick, a Democrat. Menino and Patrick clashed during the governor’s first term, but the mayor stood next to the governor in September 2010, pledging his support. Menino followed through.

The mayor’s team helped the governor’s campaign reach out to more than 100,000 voters who leaned Democratic but often missed elections. Trucks with public address systems rumbled through targeted precincts. Volunteers passed out leaflets and discussed the election with people on the street.

The afternoon of Election Day, turnout lagged in Boston. Menino’s machine helped marshal an army of volunteers to call or visit 100,000 households. By the end of the day, more Bostonians had voted than in 2006. Patrick won a second term.

“He will be friendly to both sides,’’ said Shannon O’Brien, the Democratic nominee for governor in 2002 who won Menino’s support but lost to Mitt Romney. “As a Democrat, you have to prove to him that you are going to be particularly attentive. If you have that potential or perceived clout, why wouldn’t you play hard to get some times? He knows his endorsement is valuable.’’