Commercial food waste to be banned

Later, rule may extend to homes 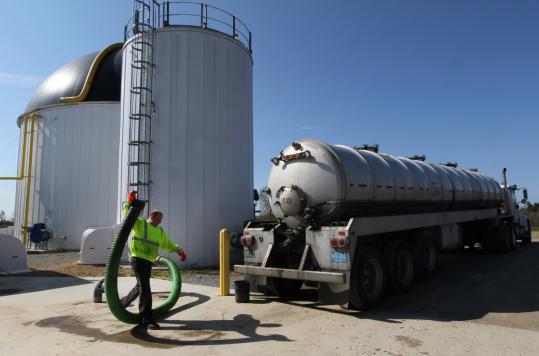 Joe Bouchard prepared to offload food waste at the Jordan Dairy Farm in Rutland, now the only site in the state where such waste is converted into energy. (Bill Greene/Globe Staff)
By David Abel Globe Staff / May 4, 2012
Text size – +

State environmental officials are preparing to ban hospitals, universities, hotels, large restaurants, and other big businesses and institutions in Massachusetts from discarding food waste in the trash beginning in 2014, ameasure that in coming years they hope to extend to homes as well.

Officials said the proposed rules, designed to save space in landfills and reduce emissions of gases that trap heat in the atmosphere, will make Massachusetts the first state with such a comprehensive prohibition on commercial food waste.

Their immediate goal is to divert a third of the nearly 1.4 million tons of organic waste produced every year in Massachusetts from landfills by the end of the decade. Instead, it would go to composting sites and a new generation of specially designed plants that convert waste into energy, heat, and fertilizer.

State officials said they want to begin diverting household waste to the new plants by the end of the decade.

“This is clearly one of the most ambitious plans of its kind in the country,’’ said Patrick Serfass, executive director of the American Biogas Council, a Washington-based group that represents the industry.

State officials envision a new, parallel waste system that would have its own transportation network to deliver the organic waste - which includes refuse such as weeds and manure - to a host of so-called anaerobic digesters. Those plants, one of which already exists on a farm in Rutland, convert methane from degraded food into power that feeds into the region’s electrical grid. Methane, a potent greenhouse gas that contributes to global warming, is contained by the plants.

As the state prepares to issue the new rules this summer, some business groups have raised questions about the potential costs.

They note the new system will require a sophisticated transportation network and special containers and compactors to store the waste safely between pickups. They worry that some restaurants and other businesses lack the space to keep the food waste on their lots, fear it could attract pests and rodents, and are concerned a new system would end up being more expensive than officials expect.

“The devil is always in the details,’’ said Peter Christie, president and CEO of the Massachusetts Restaurant Association, which represents about 5,000 restaurants statewide. “Any additional expense can be a big issue for restaurants, and food safety is non-negotiable. You can’t have it hanging around.’’

State officials and biogas industry advocates acknowledge the expense of a new system, but they say diverting food waste to the plants or compost facilities would ultimately save most businesses and large institutions money.

They note that Massachusetts already has some of the highest solid waste disposal rates in the country - between $60 and $90 a ton, compared with a national average of about $45 a ton - and that the fees will rise as landfill capacity declines. State landfill capacity is expected to drop from about 2.1 million tons this year to about 600,000 tons in 2020, and given the difficulties of issuing permits for a new site, no new landfills are planned.

Residents and businesses in the state are already diverting about 100,000 tons of food waste a year from landfills, about 75 percent of it going to compost facilities. When the regulations take effect, state officials hope to begin diverting another 350,000 tons, with much of the waste going to new or expanded plants built on public land by private companies.

Those plants, which will be encouraged with incentives and reforms in solid waste regulations, will test whether the technology works and problems like odors can be managed, before the waste would be allowed on privately owned sites, they said.

“Converting organic waste to energy through anaerobic digestion is not just a win-win; it is a quadruple win,’’ said Ken Kimmell, commissioner of the state Department of Environmental Protection. “The process creates a biogas that generates safe, reliable, and cost effective renewable electricity and heat. It saves cities and towns money by lowering waste disposal costs. It reduces greenhouse gas emissions by taking rotting food waste out of landfills and incinerators, and it conserves scarce landfill space.’’

The new disposal rules come as the Patrick administration faces criticism for falling behind in its efforts to blunt the effects of climate change. A recent report by MassINC, an independent Boston think tank, found the state is on track to fall about a third behind its goal of cutting greenhouse gas emissions to 25 percent below 1990 levels by 2020.

Kimmell has not quantified how much eliminating organic waste in landfills would reduce greenhouse gases. But as an example of the fuel benefits, he cited the state waste water treatment plant on Deer Island, which saves about $15 million in fuel and nearly $3 million in electricity costs by converting sewage into energy.

“This isn’t a major new greenhouse gas reduction initiative,’’ he said. “But it will certainly have some benefits in that regard.’’

There are already about 2,000 anaerobic digestion plants in the United States, and more than 10,000 in Europe, where organic waste has been harvested on a large scale for years.

In an interview on a visit to Boston last week, US Environmental Protection Agency administrator Lisa Jackson said she expects other states to begin taking greater advantage of anaerobic digesters. She noted the agency recently changed the names of its waste offices to reuse offices.

“There’s no question that waste is an opportunity,’’ she said. “Waste has incredible energy potential, and if that potential can be harnessed in a way that doesn’t unleash pollution, it can be transformative on a national scale.’’

In Massachusetts, many universities, hospitals, and other institutions already compost their waste.

The kitchens of the Massachusetts Convention Center Authority already compost about 95 percent of their food scraps, which saves them money.

State officials and industry groups say about half of the state’s 600 supermarkets already divert their food waste from landfills.

“We’ve found it’s the right thing to do financially - and for the environment,’’ said Christopher Flynn, president of the Massachusetts Food Association, which represents supermarkets throughout the state. “It takes time to set up the process, but once it’s up, you’re reducing your trash fees.’’

State officials see a model for how a new system would work at Jordan Dairy Farm in Rutland, the only site in the state where food waste is now converted into energy.

Since the plant began operating last year, it processes about 45 tons a day of food waste, including discarded ice cream from a factory in Connecticut, salad dressing and condiments from a plant in Ayer, and buttermilk from a cooperative in Springfield.

The farm sends a specially designed truck to pick up the waste and workers pump it through hoses into their digester, where bacteria create the methane. The gas can turn a turbine to generate enough energy to power the equivalent of 300 homes, which they use to run a milking facility, heat administrative buildings, and send energy back to the grid.

They also use some of the byproducts for fertilizer.

“This makes so much sense,’’ said Shannon Carroll, the plant’s operator. “We no longer think of what we’re getting as waste; we think of it as a resource.’’