Preserving the fabric of history

Whether it’s a vintage baseball uniform or a 17th-century tapestry, Museum Textile Services can make it ready to put on display 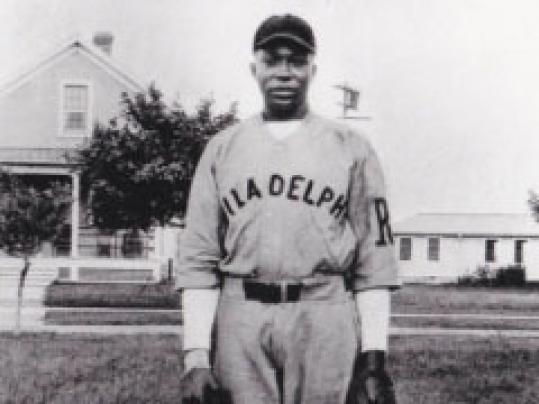 A NDOVER - Pitcher William “Cannonball’’ Jackman died 40 years ago and never made it to the major leagues, which were desegregated only a few years before his career ended. But the African-American right-hander’s uniform got Hall of Fame treatment on a recent afternoon at Museum Textile Services here.

“This is Cannonball,’’ said Camille Myers Breeze, founder, director, and chief conservator at the company.

She gestured to a work table holding Jackman’s uniform from his years with the Boston Royal Giants, probably from the 1940s, including a jersey and pants and a cap. Nearby are a belt, a pair of shoes, six unmatched socks, three (three?) stirrups, plus two rosin bags and some pads. No glove, though.

“We don’t know exactly what vintage uniform it is, but we have every reason to believe he played in it,’’ Breeze said.

That’s because the clothes have wear patterns and smudges that, even to the untrained eye, look like infield clay. The size 12E shoes are customized for pitching off a rubber.

The uniform is being stabilized and preserved by Museum Textile Services for “The Color of Baseball in Boston,’’ an exhibit opening May 19 at the Museum of African American History in Boston. Jackman’s career ended in 1953; they believe the uniform was donated to the museum sometime after a day was held in Jackman’s honor in Boston in 1971.

“With all the pieces of this uniform, we’ve taken the same approach, which is to bring everything to a level of stabilization where it can be preserved in the best way possible,’’ Breeze said. “We’re not trying to restore anything back to the way it looked in ’71 or when it was brand new. We’re trying to preserve all the signs of use, all the patina that’s on it.’’

The uniform is just one of the treasures great and small under the care of this boutique firm housed in a 19th-century wool storage building on an out-of-the-way block in the Ballardvale Historic District.

There’s a 17th-century Flemish tapestry depicting Abraham’s near-sacrifice of Isaac, which belongs to a Rhode Island prep school. A 19th-century tallit, or Jewish prayer shawl, owned by an area family that wants to hand it down to the youngest rabbi among them. The jaunty parade uniform of a 1932 US Olympic hockey team member. A 1773 sampler owned by a Massachusetts General Hospital chaplain.

Textiles are “documents of history’’ that have touched their owners’ lives in very personal ways, Breeze said. Preserving them, whether clothing or artwork, is important “because they’re becoming increasingly rare and provide a glimpse into a lifestyle that is less and less reminiscent of our own daily lives.’’

Customers include museums large and small, historical societies, collectors, and individuals. Problems include everything from simple age and the standard moth holes to mold and light damage. Kids and pets can be dangerous to items in private hands.

Some pieces just need a little cleaning and minor repair. Some must be stabilized to keep them from falling apart further. Others need restoration.

The items from the Cannonball collection were first treated in the anoxic fumigation chamber at Historic New England to take care of any remaining insect problems. Then they were cleaned with a HEPA vacuum.

On a recent day Breeze, conservation assistant Cara Jordan, and technician Courtney Jason were gathered around the table in the center of the workspace. Breeze carved away at some Ethafoam with a fish knife, creating a head to wear Cannonball’s cap, part of a mannequin that will be used to display the uniform.

“Cannonball Jackman was one of the greatest black ballplayers of all time; he was, in Boston, beloved,’’ said museum executive director Beverly Morgan-Welch. “When you can see the actual uniform worn by a great, it not only takes you deeper into that story but gives you the fabric of that story. It brings the history to life.’’

Jordan repaired the silk piping around the neck of Cannonball’s jersey, inventing a stitch pattern that will mimic the original machine-stitching. Jason applied nylon net on holes in the long-sleeve undershirt to stabilize it and mask a bit of the damage; the shirt is made of cotton, so the holes probably resulted from wear and tear, not moths. The team will also dye wool to fill insect holes in the uniform’s lettering and on the cap.

In each case, the choices they make are defined by curatorial principles, including: Do no harm.

“Our approach is, less is more,’’ Breeze said. “We first determine what the end use of the item is, and we’ll meet the needs of the textile as well as needs of the client.’’

At Museum Textile Services, a galvanized washtub connected to a deionized water system is used for washing fabrics, and while there are special soaps available, they’re seldom used.

“We prefer to let water do the work,’’ Breeze said.

High-technology tools on hand include a “preservation pencil,’’ which directs a jet of water vapor - warm or cool, of varying humidity - from an ultrasonic humidifier. It is used to relax the fibers in a material and release old adhesives. Digital photography also comes in handy. Gaps in one 19th-century embroidery were fixed by taking a digital photograph of background foliage on the other side of the image, flipping it digitally, then using a color laser printer to print it on silk that could then be carefully layered into the work.

But much of what Breeze and staff do involves only needle and thread and lots of different scissors. A job could run anywhere from $500 for fixing tears in an antique wedding veil for its next trip to the altar, to hundreds of thousands of dollars for years-long conservation projects on large museum wall hangings.

Breeze, of Milford, N.H., founded the business in 1999 after moving to the area to work at the American Textile History Museum in Lowell. She says the most common part of her job is actually writing, from bids to conservation reports to posts on the company blog at www.museumtextiles.com.

“I like to make sure people pick up on our passion for this,’’ she said. “Our role is to speak for the objects.’’