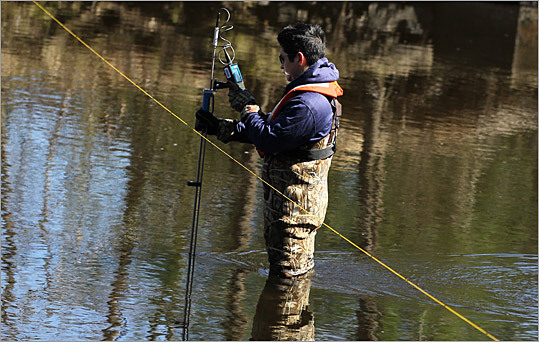 At a time when rivers and streams throughout the region usually crest and the soil is often saturated like a wet sponge, much of the state is bone-dry and many rivers are at record lows.

The water levels - caused by one of the driest and warmest winters on record in Massachusetts - have raised fears among state officials and environmental advocates about pervasive drought this summer and widespread failures of fish to spawn in their freshwater breeding grounds. Increased algae blooms and swimming bans are also possible.

Meteorologists said much of the eastern half of the state, Rhode Island, and Connecticut are experiencing drought conditions, rare for this time of year.

At the Blue Hill Meteorological Observatory this week, officials said they measured less precipitation since the start of the year than in any year since record-keeping began in 1886.

“We’re watching this closely,’’ said Nicole Belk, a senior hydrologist at the National Weather Service in Taunton. “If we’re to remain dry, it sets us up for a rapid deterioration.’’

Only two of 60 locations were at normal levels.

“We’re reaching a time where we need to be concerned,’’ said Gardner Bent, a hydrologist in the Northborough office of the geological survey, which monitors rivers and streams throughout the state.

He noted that significant storms would help. But “if we continue on the same trend as we get into the summer, the concerns we have now are going to be exacerbated,’’ Bent said.

State officials said they expect the Drought Management Task Force, which includes state and federal officials, to meet in the coming weeks to discuss whether to declare a drought advisory, which would trigger restrictions on outdoor water use for many public water suppliers.

The last time the state declared a drought was in 2010, the third such advisory in the past decade.

S.J. Port, a spokeswoman for the state Department of Conservation and Recreation, said the unseasonably low river levels “could pose some real challenges for both water supply and habitat protection.’’

Some environmental advocates said less oxygen in rivers and streams and increased temperatures because of low water flows could devastate the annual runs of herring, alewife, and other fish species that make their way from the ocean to breed in the fresh water of many rivers in the state.

With the Neponset River in Norwood this week flowing at a record low - about 80 percent below its average for this time of year - Ian Cooke, executive director of Neponset River Watershed Association, said future rains, while helpful, have fewer benefits as the weather warms and water evaporates more quickly.

He said he is particularly worried about the potential loss of hundreds of thousands of eggs laid by smelt.

“We could be talking about losing a generation of smelt if conditions don’t change,’’ he said. “We’re getting close to early summer water levels, begging the question of where we’re going to be in late summer.’’

The lack of precipitation has also raised pressure on state officials to complete a controversial plan that has been in the works for several years, intended to better regulate the use of water.

The Sustainable Water Management Initiative, a draft of which was released last month, seeks to protect watersheds by setting specific limits on the amount of water that can be safely withdrawn by private businesses and municipalities.

But some environmental advocates say the plan would allow excessive use in some areas and further deplete rivers, while water providers say too many restrictions will hurt business and cause a spike in costs to ratepayers.

“Given how low the rivers already are in Massachusetts, it would be harmful to permit municipalities to withdraw significantly more water from the ground than they currently are, because the rivers could run dry and fish would die,’’ said Rob Moir, director of the Ocean River Institute, an environmental advocacy group in Cambridge.

Jennifer Pederson, executive director of Massachusetts Water Works Association, which represents water suppliers, said she was concerned about the underlying science of the plan and argued it would cause water rates to double.

“The emerging policy is too costly and will curtail water use beyond what people think is reasonable,’’ she said, adding that too many regulations could inhibit growth and prod businesses to leave Massachusetts.

State officials said they’re trying to strike a balance between competing interests, which they hope to complete by the end of the year.

“The bottom line here is that this initiative marries science and policy to make sure that healthy streams and rivers stay that way and degraded streams and rivers improve over time,’’ said Ken Kimmell, commissioner of the state Department of Environmental Protection.

Most of southern New England’s waterways are running low.

In Rhode Island, eight of 15 rivers this week were found to be at record lows, with the other seven considered “much below normal,’’ or lower than 90 percent of all previous measurements.

In Connecticut, 13 of 35 rivers were at record lows, with 19 at much below normal.

“This is absolutely concerning,’’ said Kenneth Burke, general manager of the Rhode Island Water Resources Board.

“But this is New England. We don’t know what’s going to happen.’’

Of the two rivers in Massachusetts considered to be normal, one was the Swift River, an outflow of the Quabbin Reservoir, which remains nearly full after heavy rains from previous years.

The other is the Connecticut River, which draws much of its water from Vermont and New Hampshire, which received significantly more precipitation than southern New England.

Those who look after local rivers say they worry that this year’s early drought is a portent of the future, as climate change makes such conditions more likely in the coming years.

Bob Zimmerman, executive director of the Charles River Watershed Association, wondered whether there will be enough water to navigate the lower basin of the state’s busiest river, where kayakers compete with pleasure boats for space in the crowded waters.

In Dover, the Charles is at its lowest point for this time of year since monitoring began in 1937, about 80 percent below average.

“We could be facing some serious issues,’’ Zimmerman said.