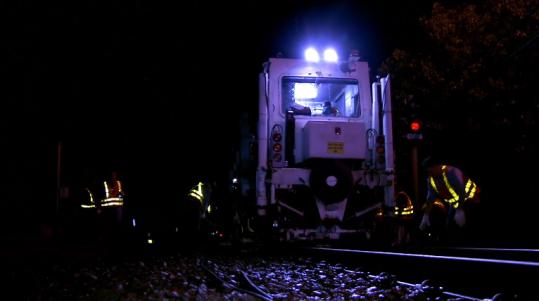 The real stars of the T documentary are those who race and toil to repair the cracked rails and other serious problems during those hours when the trains aren’t running - people like supervisor Mark McNeil (below).
By Eric Moskowitz Globe Staff / March 11, 2012
Text size – +

Roll out the Red (Line) carpet. “Boston Under: After Hours,’’ a 45-minute documentary about the T, screens March 22 at AMC Loews Boston Common. On Friday, the T began offering free, first-come, first-served tickets for the public at mbta.com.

“Boston Under’’ focuses on the overnight workers who ensure the aging transit system is ready to go every morning at 5, with doses of MBTA history, lore, and drama thrown in.

It was produced by the multimedia team from the Department of Revenue - the same people who bring you the tax forms - with the cooperation of the MBTA, but set aside any preconceived notions about a stiff or amateurish promotional video produced at taxpayer expense.

The filmmakers - who by day create a few dozen public service videos a year for the DOR and other state agencies - wanted to try something more ambitious. Fascinated by the T, they worked on “Boston Under’’ on their own time at night, while using about $25,000 worth of digital cameras and editing software acquired by the state in flusher years.

The result, a testament to how digital technology has democratized filmmaking, has the production values of a Discovery Channel documentary, mixing on-location footage, sit-down interviews, and even security camera tracks - including the Orange Line train that slammed to a stop inches from the head of a passenger who tumbled into the pit. It adds into the mix some archival photos, a tunnel tour, and an original score.

It also features healthy criticism from passengers complaining about the quality of service and the T’s 1 a.m. shutdown.

The real stars are the characters who race to repair cracked rails and other critical problems during the limited hours when trains don’t run; their accents and vernacular could make “Boston Under’’ required viewing for Hollywood dialect coaches.

Foreman Arthur Francis speaks matter-of-factly about laying a switch at Codman Yard when a stubborn rail moved suddenly and cleaved off the tops of his fingers.

“I just carried on, covered it up, told everybody what to do, somebody called an ambulance, and the boys continued putting the rail together,’’ he says, kneading those fingers on camera. “It’s part of the job. I enjoy the job. I love the job.’’

Paula Pennachio, a track welder whose interviews are interspersed with sparks-flying footage, recalls her earlier stint as a subway operator, when she narrowly missed hitting one of many 20-something revelers stumbling around on weekend nights, this one relieving himself on the tracks.

Secretary of Transportation Richard A. Davey and other officials will honor the overnight workers at the AMC screening (also held at no charge to taxpayers). Michael A. Turcotte, who oversees track workers as assistant general manager for engineering and maintenance, said the movie is a worthy portrait of employees who labor while the city sleeps.

“You’re going to see some of the controlled chaos that goes on when a problem comes up and you’ve only got this very short period of time to make sure it’s done right, its safety is tested, and we’ve got everything ready to go for the first train to run,’’ he said. “It highlights some of our unsung heroes.’’

Pat Kineavy, a 30-year MBTA veteran who started as a teenage track worker from South Boston and became a supervisor, has a central role. In an interview, he said the work is draining but exhilarating.

“You know how at the dog track they’re waiting behind [the gate] and the bell goes off and they all go out? That’s kind of what it’s like each night,’’ he said. “I think the film touches on the sense of satisfaction’’ from finishing a difficult job in time for thousands of early commuters to get to work.

“What we’ve tried to do here is make an honest portrayal of the gritty nature of the job but also the tremendous time constraints these guys have,’’ said Edward Peters - who produced the movie with Peter Olejnik, helped by Creaghan Trainor, Laurie Turner, and Don Puccini - and also serves as DOR webmaster.

For those who can’t make the free 4 p.m. screening, the movie will be shown again March 29 at 6 p.m. at the Central Square Theater ($6), hosted by the advocacy groups LivableStreets Alliance and On the Move. “Boston Under’’ can also be found on YouTube at the AfterHoursMBTA channel.

Red Line service between Alewife and Harvard stations resumed this weekend after four months of Saturday-Sunday shutdowns, to fix a critical safety problem that seized public attention in 2009. It was singled out in an independent review of the T ordered by Governor Deval Patrick and led by David F. D’Alessandro, the former John Hancock chief executive.

The work had been postponed because of the T’s well-documented financial struggles. The project plugged tunnel cracks and leaks that had plagued the “floating slabs’’ - specialized rubber pucks and large concrete blocks - that hold up the track in that area and muffle noise and vibrations for neighbors. Severe water damage to the slabs threatened train derailment.

Because the concrete requires 24 hours to cure, T workers could not do the job in the limited early morning windows normally available, prompting the weekend shutdowns, with shuttle buses provided.

Local officials and passengers acknowledged the need for the work but were unhappy with the limited warning from the T - the work was divulged less than two weeks in advance - and the cold-weather timing, as well as the slower buses plodding between stations.

“Ugh, it was horrible. It was ridiculously done. If you were living at Alewife and had to take the shuttles down to Harvard it took 28 minutes’’ instead of the usual eight minutes, said Ann Scott, a retired music professor who lives near Alewife. “I’m so glad that it is finished.’’

Turcotte, the T’s head of engineering and maintenance, thanked T riders for their patience. He said the MBTA managed to get more work done than predicted, filling 1,022 leaks, pouring 131 new concrete slabs, and laying 6,240 feet of new steel rail and 3,003 feet of electrified third rail. They also used the absence of customer traffic in stations to perform carpentry, electrical, masonry, and painting work.

The work disrupted life for the nearly 40,000 people who normally board at Alewife, Davis, and Porter on weekends. The T does not know how many of those were deterred or continued to ride the shuttles, because it did not charge for the buses, spokesman Joe Pesaturo said.

Can you fix the T budget? Do the math

At-home budget balancers who want to try solving the T’s $161 million deficit for the coming year can check out a budget calculator created by the Metropolitan Area Planning Council at http://fixthet.mapc.org.

MAPC, the regional agency that provides coordinated planning help to 101 cities and towns in Greater Boston, provides a buffet of about 30 options beyond the T’s proposed fare increases and service cuts. Some are in the T’s hands (reinstating alcohol advertising, an estimated $1.5 million), some require buy-in from others (a one-year wage freeze for all employees, $8.2 million), and some need action from Beacon Hill, such as the state picking up the tab for the $1.3 million in free bus service for the homeless to reach social service facilities on Boston’s Long Island, or raising motor vehicle registration fees by $10 to generate $50 million.

Those who complete the calculator can see aggregated results and also click to e-mail their legislators.

The calculator, launched Thursday, adds a multimedia element to the many reports and recommendations calling for the state to increase assistance to the T, in the interest of the regional economy, environment, and quality of life.

Earlier in the week, A Better City - a member organization representing hospitals, universities, and other major employers on transportation and land-use issues - released a position paper calling for greater near- and long-term support for a system that moves half a million commuters a day and reaches well beyond Boston.

The paper, available at abettercity.org, says anything over a 25 percent fare increase would be damaging, and the state should step in to make up the difference. It also calls for the politically difficult debate over new taxes to support both the badly indebted MBTA and the struggling highway system - which continues to pay many employees with borrowed funds - when the Legislature reconvenes after the election.