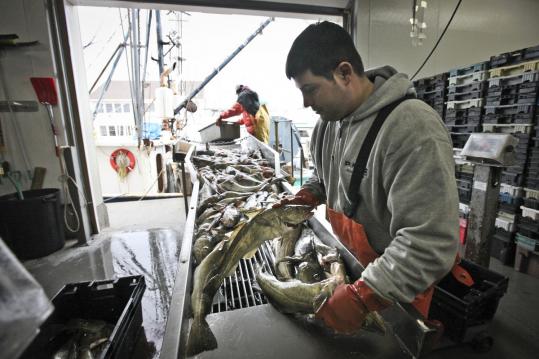 GLOUCESTER - Shortly before dawn, Dusty Ketchopulos fired up the engines of his old otter trawler, untied from the dock, and rumbled into the darkness in search of the same fish his father and grandfather caught in the unpredictable waters off Cape Ann.

With a frosty spray splashing the icy deck, the 36-year-old captain pointed with his large, scuffed hands to the ship lights that twinkled like distant stars on the black horizon: his competition.

“Everyone’s goal is to catch as much fish as possible,’’ he said.

The most recent assessment of the local cod population would suggest their job will become even more difficult. Last fall, scientists found the adult cod numbers in the Gulf of Maine were only about 19 percent of what is necessary for a healthy population - dramatically less than a previous assessment three years before.

As a result, the New England Fishery Management Council, which oversees fishing issues in the region, voted last month to recommend that the federal government reduce the local cod catch for the coming fishing season by 22 percent.

Ketchopulos and other fishermen question the scientists’ assessment and worry that too steep of a cut would put many of them out of business.

“I really don’t believe the science,’’ he said. “I don’t see any shortage of cod. I think the assessment was inaccurate, and I don’t see any reason to cut the cod catch.’’

He and fellow fishermen said they’re seeing substantial hauls. With a month left in the fishing season, he has only 10,000 pounds of cod left he can catch of the 240,000 pounds allotted to his boat, which he says he could catch in a good week.

Environmentalists, however, have urged the federal government to reduce the catch more than the council has recommended, warning that insufficient cuts risk triggering a collapse in the fishery. They say cod are often easier to catch when their ranks thin, because they remain close to their spawning grounds.

As the first glimmers of light flooded over the horizon, Ketchopulos and his deck mate, Bryan Church, unfurled their 1,000-foot-long net and began dragging it along the bottom of the sea about 14 miles east of Gloucester.

Over the past month, according to the log book aboard the 46-foot Special K, they have caught as much as 4,000 pounds of cod in a day and as little as 600 pounds. With calm waters and mild weather - which brought out a lot of competition, especially much larger trawlers that remain at sea for days - they were hoping for a decent haul this day.

But as the hours wore on, the sensor in their net failed to trigger a flashing red light on Ketchopulos’ laptop screen,the signal for a bounty of fish.

“The problem isn’t the cod; it’s the big offshore boats, and all the misreporting that goes on,’’ he said, referring to the failure of some fishermen to report their full catch.

After more than 10 hours at sea, the fishermen barely covered the cost of their fuel for the day. They landed just 150 pounds of cod, as well as a smattering of unintended by-catch, including flounder, haddock, and lobster.

As they unloaded their cargo to sell at an auction house, Ketchopulos said it was the worst day he could remember.

“The ocean is a mysterious place,’’ he said.