Driven by loss, father inspires tireless pursuit of a cure 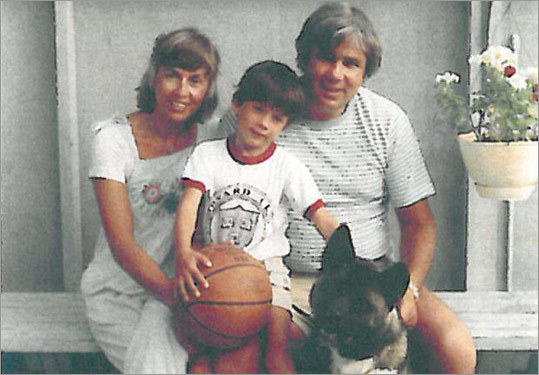 It would have been hard to imagine that any good could ever follow that Sunday afternoon at Massachusetts General Hospital when years had dwindled to months and months had given way to minutes and Joe and Kathy O’Donnell held their only child, Joey, while he shut his eyes, drew a final, quiet breath, and died.

Some parents would have been defined by this loss, understandably so. Joe and Kathy O’Donnell chose a different route. They were driven by it, driven across years that fed into decades, driven to every corner of the country, driven to play some meaningful role in chasing down the despicable disease, cystic fibrosis, that robbed them of their dreams.

Last week, the Food and Drug Administration issued an announcement with a title only a federal bureaucrat could write: “FDA approves Kalydeco to treat rare form of cystic fibrosis.’’ In fact, it was a blockbuster development, the first drug that would treat the cause, rather than the symptoms, of cystic fibrosis, a medication that showed such breathtaking results in clinical trials that it was sanctioned by the FDA in about half the typical time.

Behind that announcement sits a human narrative, a quarter century in the making, of loss, hope, and triumph.

Joey O’Donnell was, by every account, an extraordinary boy who faced a ferocious enemy, a disease that attacks the lungs and airways and leaves no survivors. At school, he served as class president and rode the backs of his many friends to get up stairs. On the Little League field, he was a natural hitter who smiled as others ran the bases for him. At home, he choked down 50 pills a day and endured intense physical therapy without ever uttering a syllable of complaint. When he died in 1986, Joey was 12.

His death wasn’t only a tragic end, but an unusual beginning to a collaboration involving his father, Boston businessman Joe O’Donnell; a Cambridge-based bioscience company, Vertex Pharmaceuticals; and a national nonprofit, the Cystic Fibrosis Foundation. They joined forces on a project that was at turns backbreaking and groundbreaking, and now find themselves within grasp of a cure for a disease that, just a dozen years ago, seemed incurable.

This first product of the collaboration, Kalydeco, is a pill that will vastly improve, almost certainly prolong, and perhaps even save the lives of some 1,200 cystic fibrosis patients who have the specific mutation it is designed to treat. It is widely believed to be a precursor to drugs that will treat a vast majority of the 30,000 children and young adults in the United States with cystic fibrosis, a disease that leads to the hardening of mucus in the airwaves and lungs and thus diminished ability to breathe and eat.

In understanding this unlikely trio, begin with the Cystic Fibrosis Foundation and its passionate chief executive, Robert Beall. The disease is prevalent enough to cause widespread pain, but too small for profit-minded bioscience companies to risk massive resources in pursuit of a cure. So Beall decided to bridge the differences. In 2000, he invested $46 million of foundation money in Aurora Biosciences of San Diego to encourage a breakthrough, a practice that became known as “venture philanthropy.’’

“The biggest gamble I ever made,’’ he once told a reporter.

Enter Vertex. It bought the foundering Aurora labs in 2001 and faced the decision whether to honor the agreement with the foundation or walk away. It stuck with it, and Vertex eventually found itself the beneficiary of another $80 million the foundation invested in the program.

Which is where O’Donnell comes in. Foundation officials turned to him to raise the vast amounts of money needed to maintain the unorthodox relationship between their nonprofit and the for-profit pharmaceutical. O’Donnell rode planes, organized events, twisted arms, and banged phones to create a mind-boggling flow of money in pursuit of a cure, virtually every dollar of it destined for research.

“He could have turned away and said he hates this disease, but he didn’t,’’ said C. Richard Mattingly, chief operating officer of the Cystic Fibrosis Foundation. “He led us. He wasn’t working to save Joey’s life. He was working for the others that still had a chance.’’

O’Donnell, 67, is equal parts Everett gruff and Harvard polish, reflecting the small city north of Boston where he was born and raised and the university where he played football and baseball and went on to receive his MBA. He thinks big, but talks plain. He made a fortune buying a small company that supplied popcorn and candy to drive-in theaters and turning it into the Boston Culinary Group, which services major sporting and skiing venues across the nation, and is now a part owner of, among other things, Suffolk Downs, which will bid for a casino license.

O’Donnell and his wife went on to have two other children after Joey’s death; neither has cystic fibrosis.

How much money has he raised? O’Donnell hesitates when asked. While he readily discusses the work of the scientists, the pain of the families, and the newfound hope in the community, he steers any conversation away from his own role in the development of the breakthrough drug.

But press him, and he bends. He started fund-raising shortly after Joey was born and launched the Joey Fund after his son’s death. In those 30-plus years, he has raised about $100 million by holding an annual big-ticket film premiere in Chestnut Hill, the Hot Dog Safari at Suffolk Downs, various golf tournaments, and a yearly bowling night for financiers. He funneled all of that money to the foundation.

His success with the Joey Fund led the Cystic Fibrosis Foundation to ask O’Donnell in 2003 to head up a campaign to raise $175 million over five years for drug research. O’Donnell hesitated, then raised $176 million, two years ahead of schedule.

In total, he has raised or overseen campaigns that have netted more than a quarter of a billion dollars - read $250 million - for cystic fibrosis research.

How? “We went out and said we have hope,’’ he said. “I got 15 million from one guy, 10 from two others, a bunch of fives.’’ He laughs softly at this, these massive contributions toward the cause.

“We would not be where we are, had he not been there,’’ said Beall, the chief executive of the foundation. “He’s authentic. He’s a man of his word. He’s not going to ask anybody for anything that he doesn’t believe in.’’

The fund-raising has allowed a grand and frantic pursuit that has left veteran scientists stunned by its level of success. Cystic fibrosis is an inherited disease caused by a defective gene that results in abnormally thick and sticky mucus in the air passages, lungs, and digestive tract. Ultimately, patients are unable to breathe and process food, and they typically die by the time they reach their mid-20s.

The defective gene was discovered in 1989 by a team led by Francis Collins, now director of the National Institutes of Health, but the high hopes for successful gene therapy in the early 1990s were never realized. The foundation continued to pump money into academic research, but progress was arduously slow and children were dying.

That’s when Beall and the foundation tacked their future to Aurora, a controversial move at the time, this mingling of nonprofit and for-profit and all the hard-raised money it involved. A team of 10 scientists in San Diego, aided by robots, spent several years screening 200,000 compounds to come up with any that could restore functions to the defective proteins.

That led to the discovery of Kalydeco in 2005, and prompted Vertex to shift the massive program to Cambridge, still with no clear idea of whether it would work. By early 2008, it entered the second phase of testing on a twice-a-day pill, involving a relatively small number of patients who took the drug over a short period of time. Failure would send the entire endeavor into a tailspin.

Late in the winter of 2008, the results arrived in the form of a batch of numbers, numbers that, to scientists, spelled out the long-awaited results of the trials. Eric Olson, a Vertex vice president who heads the company’s cystic fibrosis program, likened them to an envelope at the Academy Awards; nobody had any idea what they would show.

“A lot of people have many sleepless nights wondering what’s in the envelope,’’ Olson said. “We had scenarios, and one was the best case, and this exceeded that. It exceeded it in terms of the magnitude of the response, what it did for patients, how it worked, how well they breathed, how sick they got, how much weight they gained.’’

Olson flew to Bethesda, Md., to meet with foundation officials in a hotel conference room. He tucked the results in sealed envelopes and passed them around the table with a straight face. Beall, the chief executive, had a bottle of Scotch brought into the room. “We didn’t know whether we’d need to drown our sorrows or celebrate a great success,’’ he explained.

The room fell silent, the people stunned, so many false starts, all those years, and in front of them was incontrovertible truth that they had discovered a drug that fulfilled their most ambitious dreams. When Olson presented his findings to scientists in Seattle in April, some of them actually cried.

The final clinical trial began in 2009, many more patients over 48 weeks.

Among those tested were Cate and Laura Cheevers, two young sisters from North Andover who have cystic fibrosis. Cate, 10, a soccer goalie and avid basketball player, got Kalydeco; Laura, 13, an accomplished dancer, was given a placebo. Neither the girls nor their parents knew if either or both were taking the actual medicine.

Cate underwent a transformation almost immediately, gaining weight and breathing easier as she constantly told her mother how different she felt. Laura continued to struggle.

“It was really remarkable,’’ said Kim Cheevers, their mother. “You wondered if you were just wishing for it to happen, but numbers don’t lie.’’

Their grandfather, Gerry Cheevers, the former Boston Bruins goalie, told O’Donnell about Cate’s amazing progress, her breathing, her eating, a miracle in front of their eyes.

“That was the moment for me,’’ O’Donnell said. “I talked to Gerry and, my God, the dam broke. You get emotional. It’s a long slog, and I think of Joey. It’s one of the reasons he was put on this Earth.’’

Last week, FDA officials called Beall and Vertex to let them know of the expedited approval. Kalydeco has already been shipped. Vertex is in phase two testing for drugs that will address a much broader mutation, many thousands more people. And O’Donnell has just launched a new $75 million campaign.

“All the veterans around here say they’ve never seen anything like this before,’’ Olson said. He paused and added, “Sometimes science, when it really works, is a beautiful thing.’’