Searching for the right cure for Cape’s algae-choked waters

Nitrogen pollution suspected, but not everyone agrees 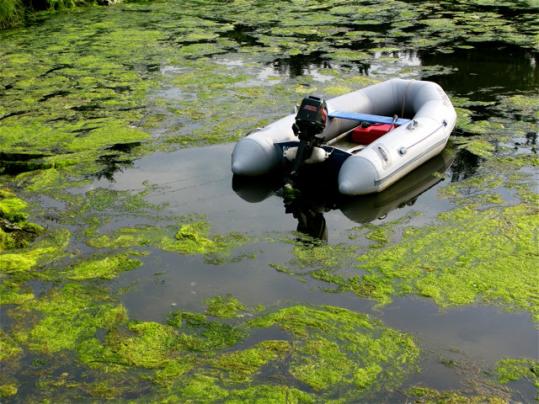 Floating algae on the surface of West Falmouth Harbor and other waterways depletes oxygen and kills the sea life below. (Milt Williamson/2008)
By David Abel Globe Staff / November 26, 2011
Text size – +

BOURNE - When the tide rolls out, the beaches on the west coast of Cape Cod often turn a shade of lime green, with splotches of a slimy substance that locals say resembles black mayonnaise and smells like rotten eggs.

In the warmer months, a film of algae spreads through the harbor in Cataumet and the opaque waters turn a copper color, veiling the little life left on the seabed.

“There can be so much algae in the water that they look like huge lily pads, like you can walk across them on the water,’’ said Scott Zeien, owner of Kingman Yacht Center, who has been swimming and sailing off this Bourne village since he was a child. “It’s really gross. It looks like a bad day on the Mississippi River - not a place anyone would want to swim.’’

The problem, a growing body of evidence suggests, stems from the dramatic rise in development on the Cape and the lack of sufficient waste-disposal systems.

The remnants of sewage from septic tanks of the more than 200,000 full-time Cape residents is seeping into the ground water and polluting estuaries, bays, and other bodies of water from Bourne to Orleans. Tides flush out the pollution on the northern side of Cape Cod.

The septic tanks adequately treat the bacteria from household waste, but they do not remove all the nitrogen in the waste water, which in the warmer months has spawned vast tracts of algae that deplete the oxygen in local waters and kill everything from eel grass to shellfish.

The pollution has sparked a growing debate on the Cape. Environmental activists blame the federal government for failing to take action, and some residents question what is causing the problem, which could cost taxpayers billions of dollars to fix.

“There are two decades of data now documenting the water-quality decline due to the nitrogen on the Cape,’’ said Mark Rasmussen, president of the Buzzards Bay Coalition. “How many other places are there in the country that have their economy and quality of life linked so closely to the quality of their coastal waters? Everything about the Cape functions around its ability to have clean beaches, abundant shellfishing, and all the tourism spinoffs. Our product, you can say, is clean water.’’

In September, the coalition and the Boston-based Conservation Law Foundation filed a federal lawsuit against the US Environmental Protection Agency, saying it has failed to fulfill its responsibilities under the Clean Water Act to oversee a regional water quality plan. The plan, they said, has not been updated since 1978 and predicted the nitrogen pollution from septic tanks would create problems if not managed properly.

The litigation follows a previous lawsuit both organizations filed last year against the EPA, which argued the agency failed to identify a host of pollution sources from septic systems, storm-water drains, and waste-water-treatment facilities that led to the discharge of nitrogen into 68 Cape waterways.

“It’s our firm belief that a coordinated regional approach is necessary - not individual towns trying to solve the problems on their own,’’ said Christopher Kilian, a senior attorney at the Conservation Law Foundation, noting that both lawsuits are pending settlement discussions.

EPA officials acknowledge the nitrogen problem, which has also polluted parts of Chesapeake Bay, Long Island Sound, Narragansett Bay, and other vital waterways along the East Coast, and they say they have been working with officials on Cape Cod to find a solution.

“Addressing nitrogen pollution is a very high priority for EPA, both around the country and in New England,’’ said Ken Moraff, deputy director of ecosystem protection at the EPA office in New England. “We’re putting a lot of resources and energy into finding solutions to this problem. We can’t have healthy coastal communities unless we have clean coast waters.’’

Neither he nor environmental advocates would comment on the settlement discussions.

They also declined to confirm the estimated amount to halt and repair the damage, which local officials say would cost taxpayers as little as $3 billion if there is a regional plan and as much as $8 billion if each town seeks its own solution.

“It’s just a big number coming at a bad time,’’ said Paul Niedzwiecki, executive director of the Cape Cod Commission, a regional planning agency. “But we have a problem and a responsibility to fix it as soon as possible.’’

The steep costs have led some residents to question whether nitrogen is the principal cause of the pollution. They cite other sources of pollution in local waters, including diesel fuel from all boats, lead paint on many boats, dredging, and runoff from storm drains.

“I think there’s a real concern that some remedy will be imposed that the science does not support, and may cost a lot more than is necessary,’’ said Paul Ammann, a retired engineer who served on a panel to review potential waste-management projects proposed in Orleans. “We have done back-of-the-envelope calculations and found things weren’t consistent with what we had been told. There’s just a deficiency of data right now.’’

Others said they worry federal and state authorities would force an inequitable solution.

“We think that kind of pressure will make things worse,’’ said Dave Dunford, an Orleans selectman. “As we move forward, we need to gain as much verification of the science to make sure we’re not wasting money trying to address some issue that isn’t the problem.’’

To help address such concerns, the Cape Cod Water Protection Collaborative held a forum this month in which independent scientists reviewed the findings of research sponsored since 2003 by the state Department of Environmental Protection, which has found nitrogen to be the key problem. In a paper released after their review, the panel called the models “scientifically defensible’’ and “consistent with the best understanding of existing conditions for Cape Cod estuaries.’’

“That endorsement should put aside, with some finality, questions about the validity of the science,’’ said Andrew Gottlieb, executive director of the Collaborative, which is an agency of Barnstable County. “It should remove one of the main obstacles to solve our water quality problems.’’

He and others said potential solutions are likely to include building sewer systems and more waste-water treatment facilities in urban areas; widening inlets along the coast to increase tidal flushing; dredging existing wetlands to allow a greater flow of water; restoring abandoned bogs to absorb nitrogen; and adding new technology to improve existing septic tanks.

Ken Kimmel, commissioner of the Department of Environmental Protection, called nitrogen the “overwhelming cause’’ of the pollution and said what is clear is that many waterways already do not comply with water-quality standards and that others are becoming overly polluted.

“It’s our responsibility over time to make sure all water bodies meet the water-quality standards,’’ he said, noting that his agency plans to encourage communities on the Cape to come together by offering no-interest loans if they combine efforts.

On a recent morning in Snug Harbor in West Falmouth, Rasmussen, of the Buzzards Bay Coalition, reached into the water with a clam rake and pulled up a clump of what looked like sludge.

Inside the rake were the bleached shells of dead oysters and mussels.

“There’s nothing left down there,’’ he said. “It’s like a moonscape.’’