An ‘Oscar’ for Waltham teacher 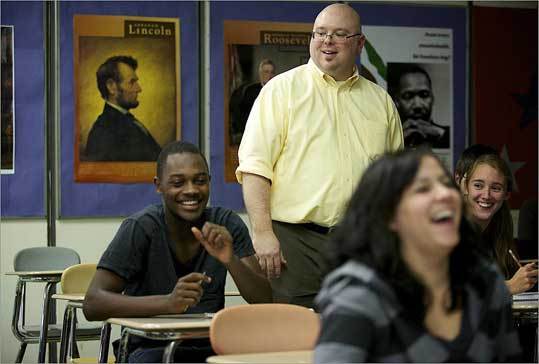 “That’s what you give me?! I’m holding a dramatic moment here, people.’’

In a voice that is one part smooth radio announcer and maybe three parts dynamic stage performer, Waltham High School teacher Derek Vandegrift is giving his students a hard time, and they are giggling and - most importantly - responding.

He is asking what the “Iron Horse’’ nickname for baseball great Lou Gehrig might mean. Students throw out a couple of synonyms for iron but he’s jockeying for more, trying to convey the emotional contrast behind Gehrig’s rise to fame as fearsome hitter followed by his sudden decline from the illness that now bears his name.

Vandegrift’s style is compelling. So much so that last month, he was among 25 educators across the country, and the only one from Massachusetts, to receive one of the so-called “Oscars of Teaching’’ from the Milken Family Foundation so far this year.

The Milken Educator Award, which is accompanied by a $25,000 check with no restrictions on its use, is shrouded in secrecy. The foundation does not accept applications, and does not identify the people who recommend recipients in each state. The criteria for winning include an “engaging and inspiring presence’’ and an “exceptional educational talent.’’

That means the foundation looks for elementary and secondary school teachers, principals and other educators who know how to make content “jump off the page,’’ said Jana Rausch, spokeswoman for the Milken Family Foundation, which is based in Santa Monica, Calif.

Vandegrift, 33, was chosen, in part, because he shows students that history is a continuum, she said.

“He makes them think,’’ said Rausch. “He relates the lessons to real life.’’

Vandegrift, who has been teaching in Waltham for 11 years, said he hasn’t fully decided what he’ll spend the award money on, but some of it will likely go toward paying off student loans from his alma mater, Boston College.

Waltham High junior Michael Gelineau, 17, is in Vandegrift’s modern US history honors class, which is studying Gehrig and other personalities of the 1920s.

“Clearly he’s the man of the school right now; he’s pretty humble about it though,’’ Gelineau said of his teacher. “He makes the class fun. You still learn, but you have a good time.’’

Class may start with a brief YouTube video made by one of Vandegrift’s former students summarizing 1920s pop culture, or “The Age of Ballyhoo,’’ the subject of the day’s lecture.

It’s the age of Steamboat Willie and jazz and, inscrutably, goldfish swallowing. Vandegrift takes his students through a lecture and slideshow that touches on some key historical events, like the Scopes Trial, where a teacher got in trouble for teaching evolution.

But one of the first stops is sports, and - in addition to some light teasing for the only admitted Yankees fan in the room - Vandegrift has his students talking about recent events (think Theo Epstein and chicken and beer in the Red Sox clubhouse) before taking a look at the 1920s. He calls on Gelineau, who plays golf, to talk about Bobby Jones, the most famous golfer of the era.

This is a traditional lecture, but Vandegrift is also known for getting students up and moving. And he is a performer.

When talking about “island hopping’’ in World War II (when the Allies strategically took only certain Pacific islands from the Japanese), Vandegrift likes to throw old textbooks around the room and hop from one to another in a demonstration. The students love to root against him if his book hopping gets too ambitious, he said, and they loved it when he once slipped and hit his head.

“If it’s them thinking I’m nuts that keeps their attention - fine,’’ he said. “A perfect class is an engaged class.’’

Vandegrift said he is humbled by the award and hopes it will also shine a spotlight on his talented colleagues.

“We’re all very proud of him here,’’ said Stephen Goodwin, the director of history and social sciences for the Waltham school district. “He’s an excellent teacher. He believes in interactive education. Students in his classes are up and participating in the lessons . . . his classes are in great demand by students.’’

Rausch, from the Milken foundation, emphasized that the award is not for lifetime achievement, but instead goes to educators early or midway through their careers and who show promise for attaining even more success with their students.

And the surprise element is fiercely preserved - recipients are always revealed in a schoolwide assembly that is arranged without the winner’s knowledge, Rausch said. There will be up to 40 recipients nationwide this year, she said, but not all have been announced.

“The idea is to really excite young people and have them see if their teacher can be honored and revered in that very public way, that will then inspire them to want to be a teacher also.’’