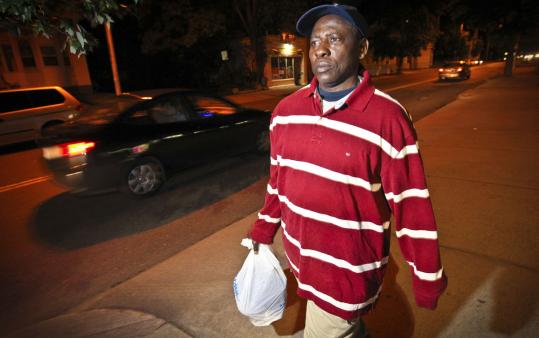 Abdikadir Mohamed, who had his license suspended, said he needs it to safely commute to the graveyard shift at a factory. (Aram Boghosian for The Boston Globe)
By Maria Sacchetti Globe Staff / September 19, 2011

State Police are investigating hundreds of people who converted Arizona driver’s licenses to Massachusetts licenses, according to a police spokesman, and since October the state has suspended the driving rights of 124 of them.

Authorities said they have not found national security or identity fraud cases, but immigrants whose language barrier kept them from getting a Massachusetts license, so they traveled to Arizona to take advantage of more flexible options.

The people whose licenses have been suspended have been called to hearings, said police spokesman David Procopio.

The pipeline from Massachusetts to Arizona has triggered a debate over how to serve hundreds of struggling refugees - legal immigrants who often have large families and need to work - while ensuring safety on the road.

Unlike Massachusetts, Arizona allows applicants to use translators to take the written test - or, more commonly in these cases, bypass it altogether if they obtain a certificate from a state-approved private driving school, where instructors often speak their languages.

Abdikadir Mohamed of Lynn is among the immigrants who joined a stream of refugees from Somalia, Bhutan, and Burma who caught flights to Arizona, obtained licenses, and returned to Massachusetts to exchange them, only to have them suspended.

The father of six said he needed a license to safely commute to the graveyard shift at a factory and to ferry his children to their separate schools. But, because of language barriers, he failed the written driving test twice, before he heard about a solution sweeping refugee communities across the state: He could get a driver’s license if he traveled more than 2,000 miles to Arizona.

“You go because you don’t have any other option,’’ said Mohamed, 55, through a translator at the Chelsea Collaborative, where he is studying to become a US citizen. “The people speak my language there.’’ He said he is bewildered by Massachusetts’ actions against him.

To get a license in Massachusetts, eligible applicants must first pass a written learner’s permit test and then a road test, and pay fees and meet other requirements. To accommodate immigrants, Massachusetts offers the written test in English and 26 other languages, which state officials say is second only to California. State policy against allowing translators is designed to prevent fraud, officials said.

Rachel Kaprielian, head of the state Registry of Motor Vehicles, says the refugees broke the law by going to Arizona, and could have sought other help to pass the test, such as signing up for English classes or other programs offered through the state.

“You have to follow a set of rules,’’ she said, and added: “That doesn’t change if you came over on the Mayflower or if you just got here from a refugee camp. The same level of public safety applies. This isn’t about immigrant populations. It’s a small group of people, however it occurred, that broke the law.’’

She said the state suspended the licenses for 60 days and told violators they would have to pay a $100 reinstatement fee and take the permit test and road test to get a license here.

Advocates say that while the state does offer the driving test in many languages, the options are out of date - featuring Finnish and Hungarian, but not the languages of Somali Bantus or other recent refugees. The list needs to be expanded, they say.

Aweis Hussein, a community organizer at the nonprofit Chelsea Collaborative, urged Massachusetts to allow translators for the written test, like Maine and a limited number of other states do.

“The main obstacle is getting that permit, the written test,’’ Hussein said. “They don’t have to provide an interpreter. We can help. But they need to let us do it.’’

Nationwide, fewer than a handful of states routinely allow people to use translators to take the written driving test because of concerns for public safety, said Brian Zimmer, president of the Coalition for a Secure Driver’s License, a Washington-based nonprofit that favors strong standards for licenses to prevent terrorism, crime, and identity theft. States discovered that many drivers who took the test via translators did not truly know the rules or road signs, he added.

In Arizona, state and federal officials are particularly investigating whether refugees exploited a provision that allows people to skip the written and road tests by taking lessons and obtaining a certificate from a state-approved driving school, said Harold Sanders, spokesman for the Arizona Department of Transportation.

The issue also raised questions about Arizona’s residency requirement. Unlike Massachusetts, which requires driver’s license applicants to provide proof of residency, Arizona has no such requirement.

To some, the greater flexibility in Arizona’s licensing process was surprising since it has been in the news for passing a strict law last year to combat illegal immigration.

Sanders said Arizona does require license applicants to prove they are in the country legally. Arizona also requires multiple documents to verify identity before issuing a license, he said.

Mohamed, who survived war in Somalia and 13 years in a squalid refugee camp before the United States granted him refuge, said he knows how to drive; he drove a tractor in Africa and understands road signs and rules. But English was his main barrier.

He went to Arizona after spending $60 on two failed tests, signed up for driving lessons in Phoenix and passed. Because he obtained a certificate from the driving school, according to Sanders, Mohamed was not required to take the state tests.

Mohamed said he felt humiliated and afraid to take the Massachusetts test again, because of the state’s actions. But he feels pressure to try, so he can support his family and relatives, transport his children, and make life easier.

Now, he says, to go to the supermarket, his family walks a mile each way. When his young son broke a leg two years ago, they had to call a taxi to take him to the hospital.

“I want to get the license to help the kids, but they slammed the door now,’’ he said.