Unwilling to give up their vigil

Parishioners of 6 churches told to close will begin appeals today 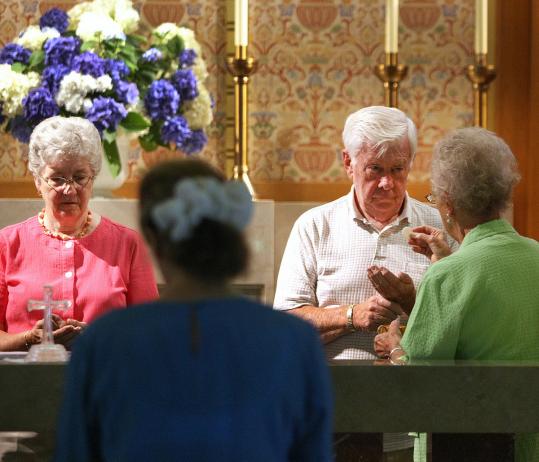 St. James the Great parishioners held their weekly prayer service yesterday in Wellesley. The church is among those the archdiocese has decided to sell. (Pat Greenhouse/ Globe Staff)
By Laura J. Nelson Globe Correspondent / July 18, 2011

SCITUATE - The quilt draped across the altar of St. Frances Xavier Cabrini Catholic Church offers an image of peace, a dove with olive branch. But woven into it is a message of defiance: “Sixth Year Anniversary in Vigil.’’

The quilts that fill St. Frances tell the story of an embattled congregation that has kept a protest vigil since the Archdiocese of Boston closed the parish and removed its priest in 2004. The congregation is readying a quilt to mark the end of year seven, defying Cardinal Sean P. O’Malley’s decree, which takes effect today, that would strip six church buildings of their religious classification and pave the way for their sale.

Today, all six churches plan to send letters to O’Malley, kicking off an appeals process expected to last two to three years. Until a decision is handed down by the Vatican, canon law dictates that the archdiocese cannot sell the church buildings, said Peter Borré, cochairman of the Council of Parishes, an organization that supports parishes slated to close.

“We’re still here, and we’re not going anywhere,’’ Maryellen Rogers said during the St. Frances service yesterday, to applause from the pews. “This is our church.’’ Today marks the 2,456th day of their vigil.

The churches slated to lose their status are St. Frances in Scituate; St. James the Great in Wellesley; St. Jeanne D’Arc in Lowell; Star of the Sea in Quincy; Our Lady of Lourdes in Revere; and Our Lady of Mount Carmel in East Boston.

Previous appeals to the Vatican to reopen the churches were rejected in early 2010. O’Malley has asked the parishioners who continue their vigils to give up and move on.

“We’re not looking for a confrontation, but at some point, the vigils are going to have to end,” said archdiocese spokesman Terrence C. Donilon. “If the Vatican had come back and said, ‘Reopen those parishes,’ we would have, but they didn’t. They reaffirmed the cardinal’s decision.”

After services yesterday, parishioners said they were willing to face arrest to fight the sale of buildings that carry deep emotional ties: where their parents got married, where children were baptized and, in the case of St. Frances, where parishioners built the church in the late 1950s.

Many parishioners cite the same statistic: half of 25 shuttered churches in similar situations won their appeals with the Vatican and reopened. That includes parishes in Springfield and Allentown, Pa., where churches were kept open as houses of worship, a designation given to buildings still considered holy, but not a full parish staffed by a priest.

“If you were a betting person, you might say, ‘Hmm, maybe this is a shot worth taking,’ ’’ Borré said. “So that’s exactly what we’re doing.’’

But the appeals are not certain. One woman raised her hand during a brief speech by Rogers, who coordinates the organization Friends of St. Frances X. Cabrini Inc.

“Is there an outside chance that the archdiocese will show up at the door?’’ the woman asked.

Handcuffs or eviction would be a bad political move, Borré said, and on shaky legal ground. The Archdiocese of Boston, the landlord of all six churches, would need an eviction notice to clear out the parishioners, he said.

But most courts will wait to see whether the Vatican overturns the archdiocese’s decree before making a decision on the matter, he said.

“We are not looking to drag people out,’’ Donilon said. “But there are no ifs, ands, or buts about it. It’s time to move on.’’

Suzanne Hurley, one of the vigil participants at St. James and a spokeswoman for the parishioners, said they have tried for years to work with the archdiocese to keep St. James open in some capacity, but O’Malley has consistently rebuffed their efforts and has not spoken to them directly for years.

“Why is it that they fear us so much? Why has it taken us occupying the church for seven years just to get to the table?’’ Hurley said. “If this archdiocese was a business, it would be the Enron of faith.’’

“All the lies we’ve heard - there’s no truth, no transparency,’’ Ashcraft said. “They continually lie and disappoint people.’’

But the vigils also bear a silver lining for the churches. St. Frances churchgoers described a tightknit community that developed after the archdiocese shuttered the parish and its churchgoers began shouldering more work, including leading services. It keeps them coming for services, which are not Masses because they are not led by a priest.

“Some of these churches are saying they don’t even need a priest to be connected to the archdiocese,’’ Donilon said. “That’s not how the Catholic Church works, and these people are not living the full Catholic experience.’’

Nancy Shilts, 77, bakes the peanut butter cup cookies and chocolate-chip bundt cakes for the postservice reception in the vestibule. She met Barbara Nappa, 77, who tends the garden and sleeps at the church every Monday, after the vigils began.

“I think some of us used to sit in the same side of the church,’’ Nappa said. “But we didn’t all know each other until all this began.’’

Christine Arnold of Scituate has worked the Friday overnight shift at St. Frances almost every week with her triplets Scott, Sean, and Christian, since the boys were 6, and says the weekly stays in the church strengthen her sons’ bonds with the church.

The boys, now 12, raid the fridge, watch a movie, or do homework before going to sleep in bedrooms that were once the vestry and the church’s confessional. Parishioners joke that now, they can confess on their iPhones.

And all the parishioners can contribute ideas for the next vigil quilt, which they expect to be ready in October.

Globe correspondents Stewart Bishop and Martine Powers contributed to this report. Laura J. Nelson can be reached at lnelson@globe.com.