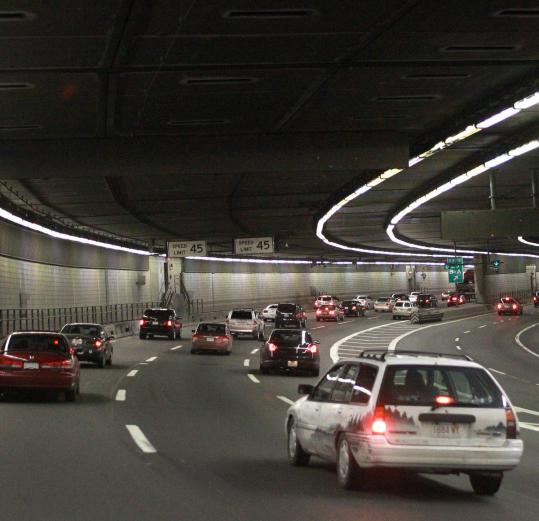 Workers driving through a ramp connecting Leverett Circle to the O’Neill Tunnel Thursday noticed a light was vibrating from a nearby jet fan and was askew. When they looked more closely, they found that five of the 10 clips that secured the light to the ceiling were corroded, leaving the light only partially secured.

Transportation Secretary Jeffrey B. Mullan said the corroded fixture discovered Thursday had been inspected in May as part of a systemwide review that found widespread corrosion in the Big Dig tunnels. But Mullan could not say why the corrosion on the Leverett Circle light fixture was not discovered during the earlier inspection.

“We’re working it. I don’t know. I don’t know exactly,’’ he said. “I know it was next to a jet fan. I’ve got my engineering team working on it right now.’’

Workers removed the corroded light fixture discovered Thursday and then reattached it using plastic straps, a remedy that has been used on many lights in the Big Dig’s tunnels since the light fixture collapse in February. Of the system’s 25,000 light fixtures, more than 9,000 have been reinforced with straps.

Mullan, whose department came under criticism for not telling the public about the fallen light fixture for more than a month, announced the latest findings yesterday, unprompted, to reporters who were inquiring about his decision to step down later this year. The Massachusetts Transportation Department also posted a full report about the situation online yesterday.

Earlier this week, Mullan suspended the Big Dig’s top engineer, Helmut Ernst, after Ernst told the Globe that he and his colleagues were trained not to leave a paper trail about safety issues in the tunnels for fear of litigation.

The incident report suggested that forced air from the jet fan may have caused the Leverett Circle light to vibrate more than normal. The report also suggested that the testing conducted in May, which involved prying loose the clips that connect light fixtures to the ceiling, may have weakened those clips. That type of testing was suspended later in the month “because of the potential for damage’’ to the clips, the incident report showed.

The Globe reported Sunday that the light fixtures at Leverett Circle in the southbound lane to Interstate 93, where the damaged light fixture was discovered, had a corrosion rate of 3.6 percent, nearly twice the systemwide average. That portion of the system suffers more leaks than others in the Big Dig, potentially promoting corrosion. The state pumped 400,000 gallons of water from Leverett Circle in 2010.

Mullan said all light fixtures near jet fans would be reinspected. Spokesman Adam Hurtubise, explained later that nine tunnel ramps in the Big Dig have a total of 35 jet fans. Fixtures in three tunnels, including the Leverett tunnel where the latest discovery was made, have been fitted with support straps. Three others have been partially or mostly reinforced with straps. The final three ramps were scheduled to be visually inspected yesterday.

Mullan characterized the shaky light fixture discovered Thursday as the type of thing that comes up all the time in the sprawling transportation network overseen by the state. Asked if it represented a safety concern, he said the tunnels were under constant scrutiny. The incident report said the light was off to the righthand side of the road and not directly over the travel lane.

“I think we’ve done extensive testing inspections of it,’’ he said. “I think I’m happy that we’ve made good progress both on the inspections and on the strapping. I’ve been assured by my engineering team that they’re working on appropriate protocols and on a permanent fix.’’

Mullan also addressed his departure from Governor Deval Patrick’s administration, his first comments since he announced Thursday that he planned to leave for the private sector. He said his decision had “zero, absolute zero’’ connection to the criticism he faced over his handling of the light fixture incident.

“As much as I love this job, I’m committed to transportation reform, [and] the employees at DOT, my family comes first,’’ he said.

Mullan, who had said he would leave later this year, did not give a specific departure date. He said he would help Patrick find a replacement.

Patrick said yesterday that he had already begun looking for Mullan’s replacement.

“We’ve been working on that for a while,’’ Patrick said.

Mullan told Patrick in May that he planned to leave later this year because he needs more money, with three school tuitions for his children.

Patrick declined Mullan’s request for a raise to his $150,000 salary, but reiterated his support for him yesterday.

“This has been an exceptional secretary of transportation,’’ Patrick said.