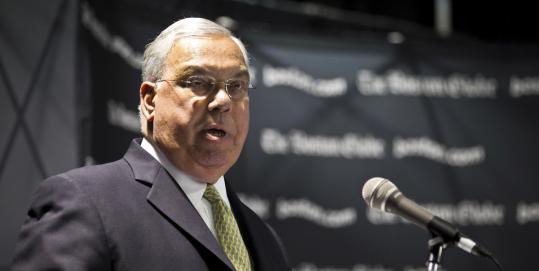 “Boston took part in Secure Communities . . . with the understanding that only the most serious criminals would be affected,” said Mayor of Boston Thomas M. Menino. (Aram Boghosian for The Boston Globe)
By Martine Powers and Stewart Bishop Globe Correspondents / July 11, 2011

In an abrupt turnaround, Mayor Thomas M. Menino has said he will withdraw Boston police from the federal Secure Communities program unless US federal immigration officials limit their deportation efforts to only those immigrants who have committed serious crimes.

In a letter to be delivered today to the Department of Homeland Security’s Secure Communities task force, Menino said the program, which requires that fingerprints from arrests be cross-referenced with federal immigration databases, has caused a breakdown of relations between residents and law enforcement officials in Boston’s immigrant communities. The cross-referencing means that people picked up for relatively minor crimes can face deportation, along with the more serious criminals the program was meant to target.

“As operated now, Secure Communities is diminishing trust, an essential part of the neighborhood fabric and a vital public safety tool,’’ Menino wrote.

“Secure Communities must change substantially or be scrapped,’’ he wrote.

Boston Police Commissioner Edward F. Davis will visit the Secure Communities task force in Washington, D.C., this morning to deliver the letter and make a statement outlining his and Menino’s concerns about the program, according to police spokeswoman Elaine Driscoll.

Boston piloted Secure Communities in 2006, and since the program’s official launch in 2008, it has expanded to cities and towns in more than 40 states.

Just over one month ago, Menino and Davis defended the controversial initiative after Governor Deval Patrick refused to expand the program to State Police.

At the time, Boston officials said they felt that Secure Communities was helping to fight crime - critical in a city that has been besieged by drug and gun violence.But Menino at that time also ordered Davis to review his files to ensure that the program was targeting criminals.

On Friday, Menino met with law enforcement officials and the heads of immigrant advocacy groups in a roundtable discussion to learn more about how the program was affecting local immigrant communities. Many of those at the meeting said the program has failed to make streets safer because it discourages immigrants from reporting crimes or talking to police for fear of deportation.

In his letter, Menino called on the Secure Communities task force to demonstrate more transparency in how it decides whose fingerprints are shared with US Immigration and Customs Enforcement. The Department of Homeland Security must establish a “partition’’ that separates immigrants charged in felony crimes from those arrested on misdemeanors, he argued.

Otherwise, he said, Boston will no longer participate in the the program.

“Boston took part in Secure Communities as a pilot project, with the understanding that only the most serious criminals would be affected and the belief that our feedback would lead to improvements in the program,’’ Menino wrote in the letter. “It would be a further violation of the public trust if instead Secure Communities proves to be a knot that the federal government will not untie.’’

It is not clear what effect Menino’s threat to have Boston stop participating in the program will make: A senior official in the Department of Homeland Security told the Globe last month that the program will be rolled out nationwide by 2013, regardless of whether state or local leaders approve.

Brendan Ryan, a spokesman for Patrick, said the governor stands by his previous criticisms of the Secure Communities program.

“This doesn’t really change anything for us,’’ Ryan said.

Last month, Patrick said he would no longer support the program because he believed it caused more harm than good by fracturing relationships between police and community members. “We give up more than we get,’’ he said. Patrick became the third governor, after Andrew Cuomo of New York and Pat Quinn of Illinois, to refuse to enforce Secure Communities.

Chuck Jackson, a spokesman with ICE, said last night by e-mail that the organization will “respond directly’’ to any local officials who express concerns about the program. ICE, he said, has made plans to improve the Secure Communities program, including the creation of an advisory board that will determine ways to best target those who pose a threat to their community.

“ICE seeks to enforce our nation’s immigration law in a smart and effective manner that best promotes public safety, border security, and the integrity of the immigration system,’’ Jackson said.

Patricia Montes, executive director of Centro Presente, a Somerville-based immigrant rights organization, was one of the officials who participated in a roundtable discussion with Menino about Secure Communities. She said she was pleased by Menino’s stance.

“I’m glad to hear he is going to complain about this program,’’ Montes said. “It’s unnecessary. It’s a program to criminalize and intimidate immigrants who don’t have proper documents. We are not against deporting criminals. The problem is they are also deporting people without criminal records.’’

Laura Rotolo, a staff attorney for the American Civil Liberties Union of Massachusetts said, while she had not seen the mayor’s letter, she applauded his assessment of the Secure Communities program.

“This program has been shown time and time again to dangerous, not just for immigrants but for public safety in general,’’ Rotolo said. “It drives immigrants further underground, it makes them afraid to talk to police or be witnesses.’’

Steve Kropper, co-chairman of Massachusetts Citizens for Immigration Reform, said the Secure Communities Program has been successful in tackling the problem of illegal immigration.

“In the last few years we’ve made substantial strides in stemming the tide of illegal immigration,’’ Kropper said. “Now is not the time to back off.’’

Kropper said the fact that low-level offenders were being affected by the program was an indication of its success.

“The opportunity when there is a minor offense to check the immigration status of someone is a very efficient way to solve the problem of illegal immigration,’’ Kropper said.

Mark Krikorian, executive director of the Center for Immigration Studies, a Washington-based think tank that favors stricter controls on immigration, said the mayor’s opposition to the program is akin to the establishment of so-called sanctuary cities where local authorities attempt to protect illegal immigrants from federal law enforcement.

“The fact is it’s not just a useful program, it’s almost a minimal prerequisite for a serious immigration control system,’’ Krikorian said. “If illegal immigrants are not identified when they are picked up by local authorities, how will federal law enforcement ever find them?’’

Krikorian said those opposed to Secure Communities are trying to make immigration status a secondary offense that a person cannot be initially cited for, like seat-belt laws in many states.

Part of the problem, he said, is the Obama administration has been ambivalent and inconsistent on immigration enforcement. “They talk up Secure Communities, but they don’t like it. They look at it like my 11-year-old looks at broccoli. They’ll eat just enough to get dessert.’’

Maria Sacchetti of the Globe staff contributed to this report. Martine Powers can be reached at mpowers@globe.com; Stewart Bishop at sbishop@globe.com.