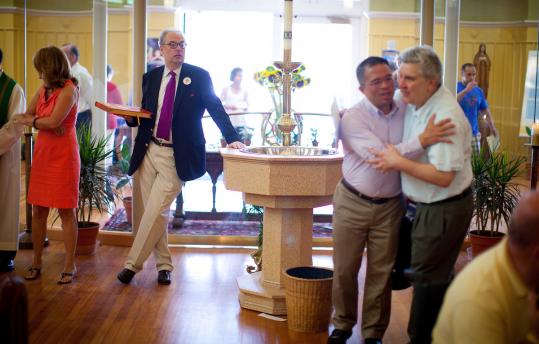 Catholics at St. Cecilia’s Church gathered yesterday before a Mass welcoming the LGBT community. An earlier service was canceled by the Boston Archdiocese over concerns that it would appear to condone homosexuality. (Dina Rudick/ Globe Staff)
By Laura J. Nelson Globe Correspondent / July 11, 2011

The Rainbow Ministry of St. Cecilia’s Church opened its doors to nearly 700 people yesterday for a long-awaited Mass in support of gay and lesbian Catholics, capping a month of controversy over the Boston Archdiocese’s postponement of the service.

A standing-room-only crowd, larger than Easter Sunday’s, packed the pews to hear the Rev. John J. Unni’s characteristically fiery message of love, acceptance, and the forgiveness of sins.

Unni’s message, which encouraged the congregation to welcome outcasts as Jesus did 2,000 years ago, was similar to that of weeks past. The difference yesterday, parishioners said, was Unni’s courage to say those words during a Mass that has drawn so much vitriol as well as passionate support.

“This is not about taking a stand; it’s about standing in the right place,’’ Unni said as members of the congregation, packed shoulder-to-shoulder in the non-air conditioned sanctuary, fanned themselves with programs. “Be with the outcasts. Be with those relegated to the margins.’’

His words marked the fifth week of back and forth between the church and the archdiocese, which began when St. Cecilia’s announced in its bulletin an “All Are Welcome’’ Mass, scheduled during Gay Pride Month in support of a sizable gay and lesbian portion of the congregation. Many of those members came from the South End’s predominantly gay Jesuit Urban Center, which closed in 2007.

The announcement brought a storm of criticism from conservative Catholics and bloggers. The archdiocese canceled the service days later, saying the church could not appear to endorse homosexuality.

The day of the canceled Mass, parishioners from St. Cecilia’s Rainbow Ministry, which serves the church’s lesbian, gay, bisexual and transgender community, held a sidewalk prayer service instead. But Rainbow Ministry members said that was no substitute for a clergy-led Mass inside the church. About three weeks ago, the archdiocese approved the Mass, which Unni said yesterday at 11 a.m.

Leading the processional, Rainbow Ministry president John Kelly walked into the nave in front of Unni, carrying a gold cross.

“I can’t believe this is happening,’’ Kelly later recalled thinking as he approached the altar. “I never thought I’d see this day.’’

After growing up gay in South Boston, Kelly, 69, left Catholicism for more than 20 years before finding compassion and a diverse congregation at the Jesuit Urban Center.

“I went through hell,’’ Kelly said. “But today, I’ve never felt so blessed.’’

Many in the congregation wore “All Are Welcome’’ buttons showing a cross and a rainbow, the symbol of the gay rights movement.

“Thank you for saying, ‘This is who we are,’ ’’ Unni said to gay and lesbian parishioners at the end of Mass. “You are a beautiful and integral part of this parish.’’

Mayor Thomas M. Menino, who attended the service, said he follows the teachings of the Catholic Church for most issues, but on social issues he goes with his heart. The Catholic Church accepts gay and lesbians as humans and Catholics, but considers homosexuality a sin, as it does with extramarital sex between a man and a woman, according to a 2005 letter written by Cardinal Sean P. O’Malley.

“Our church talks about coming home,’’ Menino said after the service. “I want to make sure that we welcome everyone.’’

In the hot afternoon sun outside the church, parishioners and visitors attended an alfresco reception and ate ribs, coleslaw, and cupcakes at round tables that dotted Belvidere Street.

“It didn’t make a difference that the Mass was on a different day,’’ said Joseph Sansivero, 67, of Andover, who wore a rainbow-pinstriped shirt. “The message is appreciated.’’

Richard Iandoli, vice chairman of the parish council, said Unni’s message bore special importance because his fearlessness in supporting gay parishioners, who sometimes feel shunned by other Catholics, may encourage other gay and lesbian Catholics to come back to the church.

“The message was the same, but the feel was different than it was in June,’’ said Iandoli, who was a driving force behind the service. “We know all are welcome here, but public affirmation goes a long way.’’