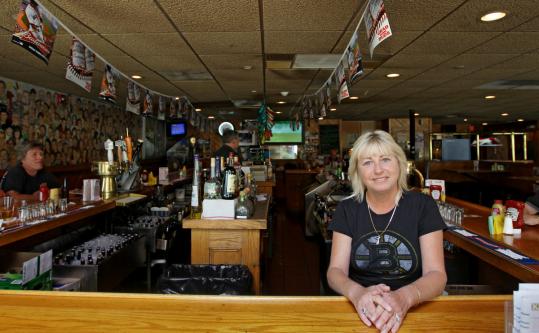 Joyce Hynds, the owner of The Bus Stop Pub on Western Avenue, said she has lost 40 percent of her business as the Harvard project stalled. She said the tavern once employed two waitresses most days of the week and a third on Fridays. Now it employs just one. (Jessey Dearing for The Boston Globe)
By Andrew Ryan and Vivian Yee Globe Staff / June 17, 2011

On the day Harvard University leaders formally unveiled the latest version of their long-promised expansion into North Allston, neighborhood residents responded with a consistent refrain: We’ll believe it when we see it.

Homeowners in frame houses with tidy yards have lived with vacant Harvard-owned storefronts. They have heard for more than a decade about grand plans for a new campus for the nation’s oldest institution of higher learning. They have lived through a blitz of activity followed by the halting of construction when the economy cratered.

Yesterday, Harvard leaders recommended a new way forward in Allston, suggesting a more bite-size approach that could include partnerships with private developers and pharma ceutical and biotechnology companies.

Already, hints of life have returned along Western Avenue, buoying some residents and suggesting a renaissance is coming.

“It does stink that it’s kind of a ghost town down there,’’ said Cheryl Beaulieu, 48, who has lived in the neighborhood all her life. “But they’ve got a pizza place going in and a bakery, so there’s a little action.’’

Harvard leaders presented their ideas last night at a community meeting on the business school campus, attracting an audience of about 60 who heard about a proposal lacking specifics on size, cost, and a concrete schedule.

After 18 months of research, a team that included a majority of the university’s deans is urging Harvard’s president, Drew Faust, to redesign a stalled science complex.

The group is also pushing the university to create an enterprise research campus akin to MIT’s Kendall Square; to explore the potential for a conference center and hotel; and to develop stores, restaurants, and housing for faculty and graduate students.

“Why should we as a community support five to six developments when Harvard can’t follow through on one — the science center?’’ said Cathi Campbell, 43, who lives in Allston. “Do you actually care about the community? Because it certainly doesn’t feel that way.’’

Harvard owns 359 acres in Allston, almost double its Cambridge home base. The Allston campus was designed to significantly expand the university’s footprint in the life sciences.

But when the university’s endowment lost $11 billion in the recession, Harvard decided in late 2009 to halt work on the science complex.

“It seems like this is going to be on Harvard’s terms, not the community’s terms,’’ said Brent Whelan, 59, of Allston. “You have heard from us over and over again, and nothing happens. That’s why we don’t bring any trust to the table. I’m sick of hearing about everything you’ve done after you’ve done it.’’

“Is this pie in the sky?’’ said Peter Tufano, a financial management professor at Harvard Business School who helped lead the team. “We don’t think so.’’

North Allston has a complicated relationship with Harvard. In 1997, residents seethed when they learned about the secret land deals brokered decades ago by Harvard in Allston, and they grew frustrated at the lack of progress.

But longtime residents interviewed before last night’s meeting said they also recognize that the Ivy League neighbor could be a benefactor.

“I always said from the beginning that this could be an advantage — an opportunity of some fashion — if we work with Harvard constructively,’’ said Ray Mellone, a chairman of the Harvard Allston Task Force who lives a few blocks from the house where he was born eight decades ago.

“That doesn’t mean we buy everything whole cloth. There’s got to be healthy skepticism. But we might get this thing turned into an advantage.’’

The neighborhood sits apart like an island, squeezed between the Massachusetts Turnpike and Harvard and a bend in the Charles River. As a community, Mellone said, the nucleus for years was St. Anthony’s Catholic Church, which celebrates Mass in English and Portuguese. Some residents remain for a lifetime.

But this corner of Allston also prides itself on its diversity. It welcomes immigrants, graduate students, and hipsters with tattoos who dubbed the neighborhood Lower Allston, or L.A.

Owners of some local institutions said they fear the planned development and new restaurants.

When a warehouse closed to make way for Harvard’s now stalled life science center and WBGH moved out of a building where Harvard is now constructing an Innovation Lab, the Bus Stop Pub lost 40 percent of its business, said Joyce Hynds, the tavern’s owner.

Once the bar had two waitresses and added a third on Fridays. Now, they have just one waitress all week.

“This community just keeps getting smaller,’’ Hynds said. “I think soon it’s just going to be a larger part of campus.’’