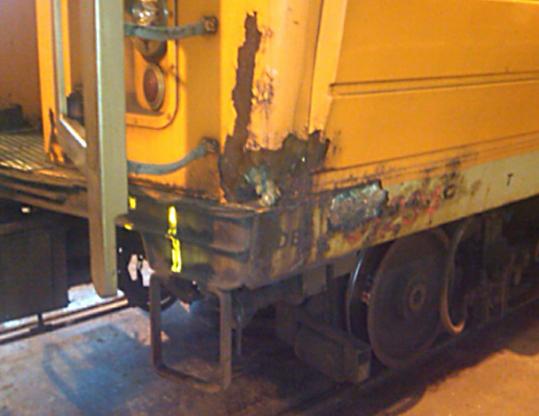 A deteriorating side sill, a structural element that runs the length of the car, one of many needed Orange Line repairs. (Mbta Photo)
By Eric Moskowitz Globe Staff / June 9, 2011

MBTA general manager Richard A. Davey revealed yesterday for the first time that it will take $100 million to upgrade decrepit Orange and Red Line trains to keep them running until even costlier replacements can be afforded.

He reported that an exhaustive review of the two lines confirmed what subway riders had long suspected: The aging subway cars are challenging the MBTA’s ability to run a full set of trains each day, causing longer waits on platforms and more frequent service interruptions.

Though all 120 Orange Line cars and one-third of the Red Line cars are well past their intended lifespan, their replacement — at a cost of $1 billion — is perhaps a decade away. And service will probably degrade even further without the interim investment, Davey said.

“This is an inconvenient truth,’’ he told the MBTA’s board of directors. “It’s not a question of whether we do it or not — we must.’’

Neither the total replacement nor the expensive band-aid was included in budgets the board approved in April, though members discussed the unmet maintenance needs of the T, which exceed $3 billion for the subway, commuter rail, and bus system.

At the same time, Davey asked the T’s new chief mechanical officer, Jeffrey D. Gonneville, to lead a review of the Orange and Red Line cars, working with outside engineers to test car elements, comb maintenance records, and analyze the fleet needs. Gonneville returned those findings yesterday, and they were stark, particularly for the Orange Line.

The T requires 102 cars every morning to send off a new train every 4 minutes, 52 seconds on the Orange Line. But cars are breaking down roughly twice as often as they used to and require more substantial repairs.

With fewer trains, the platform wait times have increased on the Orange Line by an average of 20 seconds this year, though some days it has been an extra minute or two between trains — to say nothing of prolonged delays when a train breaks down in service.

Gonneville yesterday showed close-up images of corroded and cracked metal that evoked a barnacled shipwreck but in fact came from a transit system that is an anchor of the regional economy and moves 1.3 million riders a day. That surface damage could soon lead to structural problems, said Gonneville, pointing out a variety of fatigued and degraded components.

Manufacturers build subway cars to last 25 years, provided they receive a mid-life overhaul to refurbish or replace major elements such as propulsion systems, brakes, lighting, and ventilation. None of the Orange Line cars, built between 1979 and 1981, have been overhauled.

The oldest 74 cars in the Red Line fleet, pressed into service during Richard Nixon’s first term, have not been overhauled for a quarter century.

The repairs can be done in-house but would require $100 million in additional labor and materials, Gonneville said, detailing a variety of technical-sounding needs, including speed sensors, electrical converters, poppet valves, and trucks — the cast-metal components on which the wheels and motors are mounted — as well as cosmetic repairs.

That could carry the T to the point of purchasing new cars, a complex process that could take a decade.

Davey urged the board to spend the money on repairs, even if it means bumping another project or borrowing more money atop the T’s existing $5.5 billion debt.

“There is no more core business for us than running the two subway lines with the highest ridership,’’ Davey said.

Board members questioned the wisdom of investing in such old vehicles and asked if the T might speed acquisition of new ones.

“I would love for you guys to do a little bit of brainstorming to see if we could spend a little bit less than $100 million and accelerate the procurement process, so we get new cars into service more quickly and spend less money,’’ said board member Ferdinand Alvaro Jr., a corporate lawyer from Marblehead.

MBTA leaders said they would try, but transit vehicle purchases are notoriously slow, even when prototypes do not need to be designed and tested for the unique specifications of the T’s century-old tunnels.

Brian Kane, a budget and policy analyst with the MBTA Advisory Board, which represents cities and towns served by the T, said afterward that the findings affirmed what the advisory board has warned for years: The MBTA lacks enough money to meet the needs of current riders, much less the expansion sought by lawmakers and advocates.

“Anyone that looks at the fleet roster will see it’s just not working. And everybody over the winter was rightly complaining about breakdowns and delays on the Red and Orange lines,’’ Kane said. “Paying $100 million to get an extra seven years out of 50-year-old trains? I’m glad they’re doing it, but I’m not going to stand here and say it’s wonderful.’’