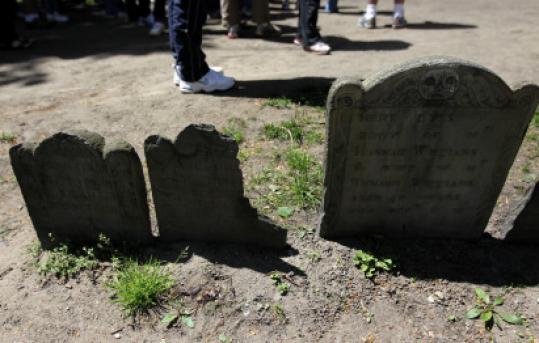 Paul Revere is among the historic figures buried in the Granary yard. (David L. Ryan/ Globe Staff)
By David Abel Globe Staff / May 16, 2011

Rust has corroded the wrought-iron gates. When it rains, the poorly seeded grounds fill with mud as runoff overwhelms the old drainage system. Many of the slate headstones are crumbling or illegible, and some of the tabletop tombs are sinking into the earth.

“Watching the erosion of this national treasure is sad,’’ said Hannah Husband, 27, who for the past two years has led tours of the hallowed cemetery in the guise of Dorothy Quincy Hancock, wife of the state’s first governor.

After years of watching the Granary deteriorate, city officials last week announced a two-month, $300,000 project that in a few weeks will begin refurbishing this highlight of the Freedom Trail.

The work will include widening the paved paths around the cemetery; new observation areas near the graves of Adams, Hancock, and other historic figures; a new path behind Revere’s grave; and new chain-link fencing to keep visitors on the paths.

The Freedom Trail Foundation will contribute $125,000 in grants to the project; the rest will come from the city.

“We are honored that the Freedom Trail Foundation has chosen to dedicate the first grant it has ever given to improving the visitor experience at the historic Granary Burying Ground,’’ said Antonia M. Pollak, commissioner of the Boston Parks and Recreation Department, in an e-mail. “This preserved and enhanced space offers a unique window into Boston’s past, but its very popularity has meant great wear and tear on the site. These improvements will address those issues by improving the walking and viewing experience.’’

Pollak said the cemetery will remain open during the renovations, though parts will be sealed off where the work is being done.

The Granary was established in 1660, in what was then part of the Boston Common, to alleviate overcrowding at the nearby King’s Chapel Burying Ground. It became known as the Granary in 1737, when a small building used to store grain was moved to the site now occupied by Park Street Church.

It has about 2,345 gravestones and tombs, although historians say more than 5,000 people are buried there. Most of the grave markers no longer align with their tombs because the cemetery underwent changes over the centuries.

Among the hundreds of tourists who strolled through the burial ground yesterday, Karen Schreier, 56, of Johnstown, Pa., said she thought the Granary in good shape, given its age.

Looking at the long patches of dirt where a carpet of grass once grew, Donald Schreier, her husband, said, “If anything, it seems sacrilegious to allow people to walk on top of the graves.’’

As his family admired the obelisk marking the grave of Benjamin Franklin’s parents, Tim Jones, 37, of Coatesville, Pa., said he hoped the city looks after this national gem.

“There’s so much history here that it would be a waste if it wasn’t preserved,’’ he said.

Among the regular visitors, Andrew Olson, 42, who leads tours in the costume of a forebearer who was a Revolutionary War veteran, said the city hasn’t done enough to remove trash or prevent the homeless from sleeping in the cemetery.

“A lot more needs to be done,’’ he said, noting that the gates are often unlocked at night.

Jonathan Overby, 28, who leads tours as a minister from the Revolution, said he has noticed stones missing and that vandals have knocked over tombstones.