With the coming shutdown of Fairway Bowling, another purveyor of this once-popular game vanishes 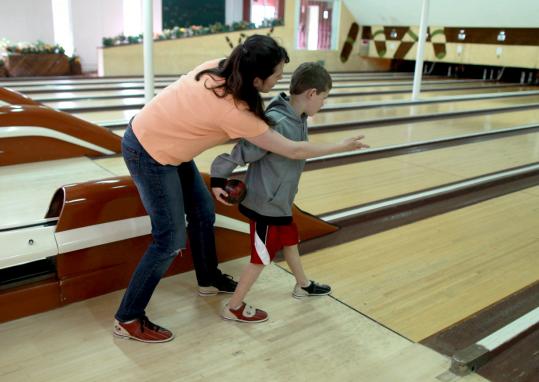 Nicole Mela showed her son Ryan some of the finer points of the lane game at Fairway Bowling in Natick. The bowling establishment is shutting down after 56 years of operation. (Jonathan Wiggs/Globe Staff)
By Erica Noonan Globe Staff / May 6, 2011

NATICK — The 32 lanes of one of the most prominent suburban bowling alleys in the area will go dark next Friday night, as Fairway Bowling, a Route 9 institution, shuts its doors after nearly 56 years in business.

The prospect of Fairway’s closing — the latest of several local bowling alleys to close recently — is “like a death,’’ said Helen Sellew, who with her father and brother, helped open the business in 1955 on part of their family’s dairy farm.

“When we opened, everyone bowled,’’ said the 84-year-old owner. Fairway, which charged $1 for three games, or strings, in the 1950s, was so popular that it expanded from 16 lanes to 32 just five years after opening, and the family built a golf putting and driving range behind the complex.

Over the years, the long, squat building with the orange-paneled façade and the brown and tan fiberglass benches became familiar to fans of the long-running local television show “Candlepin Bowling,’’ hosted on weekends by Don Gillis on WCVB-TV, featuring the distinctive New England bowling style that features smaller balls and thinner pins than traditional tenpin bowling.

Yesterday, Fairway’s faithful bowlers, nearly all in their 80s, lamented its end.

“I hate to see it close,’’ said Bob Cowie, 81, who has been bowling with close friends Ed Lupinksi, also 81, and Joseph Quagliozzi, 80, all of Waltham, for nearly a half-century.

This is the third regular bowling haunt the trio has watched close. Riverside Lanes in Newton closed in the 1980s, and the Wal-Lex bowling and roller-skating complex shut its doors in 2002.

Just last month, the 90-year-old Needham Bowlaway, an eight-lane candlepin alley nestled on a basement floor near Needham Center, also closed its doors. On its Facebook page, the Needham alley thanked customers for their support, but said the economy had made it impossible to stay in business.

“There’s not too many places left,’’ said Quagliozzi.

The men said they would probably begin bowling at the Acton Bowladrome next month.

The state has approximately 40 remaining candlepin bowling alleys registered with the Massachusetts Bowling Association, according to the group’s website.

Al Gangi, president of the association, called the Fairway closing a blow to the state’s bowling industry.

“Whenever you lose a candlepin center, it means a tougher time for everyone still here,’’ he said.

The association’s membership includes approximately 40 remaining candlepin alleys, down from a high of more than 100 members in the 1970s, said Gangi, whose family has operated bowling alleys in Woburn, Gloucester, and Milford, N.H., for three generations.

At the Fairway, which uses old-fashioned scorecards and rents a pair of scuffed maroon-and-navy bowling shoes for $3.25, Sellew agreed earlier this year to sell the 33,000-square-foot building and surrounding property. It was assessed by the town in for $2.8 million and has gone to another local business, the Dover Rug Co., which has said it will probably move its showroom there.

There was a time when suburban women were regular daytime bowlers, and men were avid after-work bowlers, wearing colorful shirts bearing their company or civic organization logo.

But women entering the workforce on a larger scale in the late 1970s and 1980s created a sea change for activities like bowling. It became harder to fit into busy family life, she said.

But over the decades, Fairway always prided itself on being “clean, safe, and friendly,’’ Sellew said. Her father disliked pinball machines and their descendants — arcade video game machines — and never allowed them, keeping the Fairway a calmer, family establishment focused on bowling, she said.

Many of the successful contemporary bowling businesses — including Kings in Boston, Lanes & Games in Cambridge, and Metro Bowl in Peabody — incorporate video games, light shows, and even cocktails into the experience, but that was never the Fairway’s niche.

“It’s been said you can’t make a living the old way anymore, and maybe that’s right,’’ Sellew said. Yet, she refused to sell the Fairway as a bowling business, choosing instead to see it close.

“Nobody would have run it the right way, the way I wanted,’’ she said

A typical weekday still draws about 100 bowlers. Fairway is still a lively place on weekends, Sellew said, with hundreds of younger bowlers paying $4 per game. But that is not enough to sustain a business that has sky-high bills for heating and air conditioning, in addition to other expenses, she said.

Gloria Cullati, 88, of Framingham is part of a Thursday afternoon women’s bowling club and has been coming to Fairway since 1960.

“We just love the sociability and sitting together,’’ she said.

Mechanic Jeremy Seaholm, 30, who keeps the pin machines and scoring machines in working order, has been working full time since graduating from high school 12 years ago. He considers himself lucky to have found a new job as a bowling alley mechanic at Ryan Family Amusements in Millis, but will work at Fairway until the last pin falls.

“A lot of people are saying they are going to miss this place,’’ Seaholm said.

The staff does not plan a party for the May 20 closing date, though the lanes will be open until 11 p.m. as usual.

The landmark marquee will probably bear a final message, Sellew said, yet to be determined.

“I think we’ll just say that we’ll really miss everyone,’’ she said.