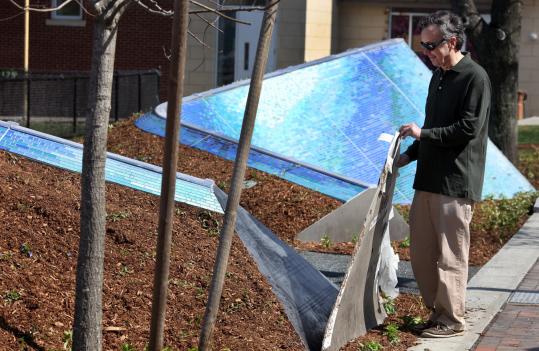 Ed Jay peeked at the plaque commemorating the neck of land that had linked downtown Boston to the mainland. (Pat Greenhouse/ Globe Staff)
By Kay Lazar Globe Staff / April 25, 2011

And you thought Boston’s South End was prime real estate these days?

There was a time, more than two centuries ago, when a narrow neck of land, barely 40 feet wide, was all that connected downtown Boston — then known as the Shawmut Peninsula — to the mainland.

Today, that bustling area around Washington and East Berkeley Streets will get its due as a sweeping sculpture commemorating the land’s critical place in Boston’s history is dedicated in a ceremony with Mayor Thomas M. Menino and South End residents who labored more than a decade to complete the project.

Called LandWave, the 100-foot-long and approximately 5-foot-high sculpture, which evokes one wave bisected by a narrow walkway, rises from the edge of Peters Park along Washington Street. Iridescent sea-colored tiles adorn one side of the crest, while freshly mulched earth, with vinca vines in full bloom, covers the other.

A strip of blue lights running the length of the two crests helps continue the nautical theme in darkness.

“That was the spot that saw everybody through, all the immigrants, the patriots, anybody who came into the city to get to the mainland you had to go through that spot,’’ said project cochairman Bob Wells, who lives across Washington Street from the site and spent months researching the area’s histo ry.

Wells’s involvement predates the LandWave project, going back to research he was conducting in the late 1990s to unearth the neighborhood’s history for plaques that would become part of the long-planned Silver Line bus stations in the area.

The computer programmer, who has a passion for history and architecture, was fascinated by the history of “The Neck.’’

It is, he found out, the strip that Revolutionary War hero William Dawes snuck through on his 1775 nighttime mission from Boston to Lexington — the same evening as Paul Revere’s legendary ride — to warn of the approaching British army.

“When the British occupied Boston during the Revolutionary War, they put up barrier fences at the beginning of that neck, so nobody could go in or out, so they could isolate the peninsula where they were,’’ said Thomas H. O’Connor, a Boston College professor who specializes in Boston history.

Eventually, the peninsula grew too crowded, and Bostonians started searching for new places to put down roots. Thus began the filling in of the waters around the neck to create new neighborhoods.

“The South End was the first neighborhood outside that Shawmut Peninsula, but just as the place began to flower in the 1830s and 1840s, the bottom fell out of their market, because a group of real estate developers decided to develop the Back Bay, which was on the other side of the old neck,’’ O’Connor said.

Eventually, many of the South End’s stately Victorians were torn down in the 1970s to make way for urban renewal, he said.

But on yesterday’s sun-soaked late-April morning, amid a stream of pedestrians — many hooked to earphones or glued to cellphones — these gems of Boston’s waterlogged history seemed a very distant past.

“Initially I thought this was for skateboarding,’’ said Kevin Schwartz, a 33-year-old pediatric emergency room physician on his way home from a game of hoops in Peters Park.

Told of the local history — the plaque that describes the background was still covered yesterday — Schwartz decided that the rich back story “makes me like it even more.’’

For 29-year-old Samantha Jay, who was out for a stroll with her parents, a discussion of the sculpture brought a sheepish confession.

“I’ve lived here three years and this is the first time I’ve noticed it,’’ said the Jamaica Plain native. “Is that terrible?’’

She correctly guessed the sculpture’s background had “something to do with water,’’ at which point her father, 65-year-old Ed Jay, a lawyer with a passion for Boston history, pronounced the sculpture “lovely, striking, and effective.’’

Also striking was the project’s cost, which grew to substantially more than originally planned, in part because the project took years longer to complete than initially anticipated.

It started as a neighborhood discussion in 2000, later envisioned as a $200,000 sculpture with three waves. Its costs nearly tripled to a final price tag of $550,000, even as the economy soured, public financing dried up, and the committee had to scrounge for more private funds.

Shauna Gillies-Smith, the lead artist, thought at times the project was dead.

But backers scaled it back, and persevered.

“When they lost the money, I felt strongly we could redesign it with two waves and it could still be a really strong piece,’’ she said.

“It’s been an impressive community effort.’’

Boston Globe correspondent Matt Byrne contributed to this story. Kay Lazar can be reached at klazar@globe.com.