2 more ex-campers allege abuse, but not by man who took own life 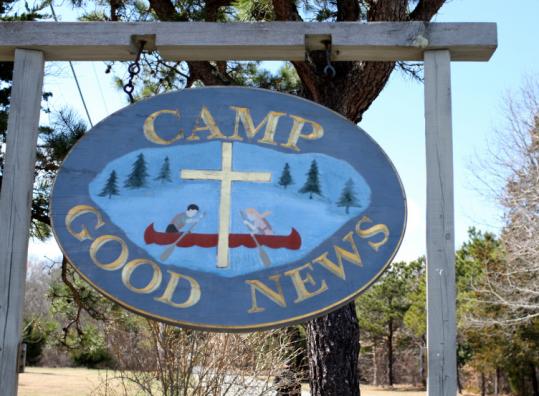 A sign at the front of Camp Good News, where Charles Devita, a longtime camp employee who served as director of the physical plant, shot himself to death Wednesday. (Jonathan Wiggs/Globe Staff)
By Shelley Murphy and Akilah Johnson Globe Staff / April 8, 2011

Boston attorney Mitchell Garabedian said a man and a woman told him yesterday that they had been sexually assaulted at the Christian camp in the 1980s.

“It’s a snowball effect,’’ he said. “They are inspired by other people coming forward.’’

The former campers, five men and one woman, have stepped forward since US Senator Scott Brown’s disclosure that he was molested as a boy at a religious camp on Cape Cod, which was later identified as Camp Good News in Sandwich. According to Garabedian, the man and woman who contacted him yesterday said they were molested by a worker at the camp, but not by Charles “Chuck’’ Devita, who committed suicide Wednesday after learning that prosecutors were investigating a sexual abuse allegation against him.

Garabedian turned that allegation over to police and prosecutors Monday after disclosing that the victim, a 36-year-old man, said he had been abused as a child by Devita while attending the camp in 1985.

With that allegation still under investigation, a contradictory image of Devita has emerged. Friends have come to his defense, using words such as giving and faithful to describe him, while his mother, from whom he has been estranged for nearly two decades, called her son “a very sick individual.’’

“Now that I know why he [killed himself], he did the right thing, because he knew he couldn’t come to me with that,’’ his mother, Sandra Devita, said in a phone interview Wednesday from her Tampa home.

Devita’s pastor, the Rev. Bob Condon of Gateway Christian Center in Mashpee, offered this perspective of the man who had been a member of his congregation for 11 years: “The parishioner who we are burying was a wonderful man. There was nobody with a bigger heart or kinder spirit. Anything you asked him to do, he would do.’’

Condon said he last spoke with Devita at church Sunday and saw no signs that he planned to take his own life.

Their final conversation was about rearranging chairs to accommodate the crowd, Condon said, and he seemed “very upbeat.’’

“He stuffed it,’’ the pastor said. “Whatever he was feeling, I don’t believe he shared it with anybody.’’

Condon said he got a phone call Wednesday morning from a congregation member who had been at Devita’s house and discovered suicide letters.

“He found the notes,’’ Condon said.

In the letters, Devita insisted “that he never did anything being alleged’’ and was “sick of being accused,’’ according to a law enforcement official with knowledge of the case.

Condon said he has not seen the notes but hopes to because “one of them had my name on it.’’

“There may be something in the letter that I’ve been asked to do for him, and I would want to do that,’’ he said.

Garabedian said the six former campers who had contacted him by yesterday alleging they were sexually assaulted at the camp included three men who identified Devita as their attacker and two men and a woman who have identified someone else.

All of them say they were inspired to come forward after Brown, 51, disclosed in his autobiography, “Against All Odds,’’ released in February, that he had been groped by a counselor while attending a Cape Cod religious camp as a boy.

The Republican senator has not identified his abuser or named the camp.

But operators of Camp Good News acknowledged that Brown had attended the camp, expressed shock and concern over the allegations, and issued him a letter of apology.

Devita, a longtime camp employee who served as director of the physical plant, shot himself to death Wednesday as he sat in his pickup truck outside the camp, according to authorities.

He was an only child who grew up in Flushing, in Queens, N.Y., and first attended Good News as a camper at the age of 9.

Devita earned a bachelor’s degree from SUNY Plattsburgh in upstate New York in the early 1990s and returned to the Cape. From 1993 to 1999, he worked as the activities director at Riverview School in Sandwich, a boarding school for students with intellectual disabilities.

“He was a good employee,’’ said Karen Schwartzman, a spokeswoman for the school. “He left on his own.’’

But in a telephone interview Wednesday night from her home in Florida, Devita’s mother said she suspected her son may have been molesting children when he was in his early 20s. She said those concerns were voiced to the camp’s former director, Faith Willard, who said nothing was amiss.

In a statement issued by the Boston public relations firm hired by Camp Good News, Willard, whose family has operated the camp for decades, denied being warned by Devita’s mother.

Willard, according to the statement, “had only one conversation’’ with Sandra Devita, and “at no time was the issue of abuse raised.’’

“That one conversation was initiated by Mrs. Devita for the purpose of asking Ms. Willard to have Chuck Devita call his mother,’’ the statement said.

Garabedian said the camp’s supervisors must explain why they did not notify police after Devita’s mother, who says she previously worked as a social worker focusing on sex abuse cases, raised concerns about her son’s behavior.

There have been other allegations of improper behavior involving Devita. In 2002, former Good News camp counselor Charles Lewis filed a report with Sandwich police saying he had repeatedly found child pornography on Devita’s computer, according to Lewis.

Lewis, who worked at the camp from 1991 to 1999, said that he reported his findings to Willard, but that little came of it.

Lina Gonclaves, who says she dated Devita while working as a counselor at the camp, said she confronted him about the allegations in summer 2000. He denied them, she said, and she believed him.

“We went out for a meal, and I asked him about the abuse allegations and the children,’’ Gonclaves said yesterday in a phone interview from her home in London. “He confessed to me that he had in the past when he was having whatever problems in his life that he actually had looked at homosexual pornography.’’