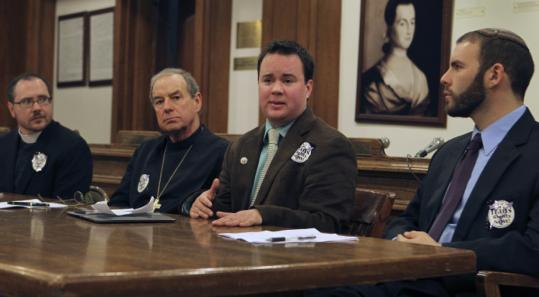 Bishop M. Thomas Shaw of the Episcopal Diocese of Massachusetts and several other clergy yesterday called on Massachusetts lawmakers to pass transgender-rights legislation and asked religious communities to throw their support behind the bill.

Shaw said that virtually all transgender people have experienced discrimination or harassment and about one-quarter have been fired from their jobs.

“Supporting this legislation, and supporting transgender people in the life of the church and in secular society really has to do with the living out of my baptismal covenant,’’ he said.

The bill would prohibit discrimination in Massachusetts against transgender people in employment, housing, public accommodations, education, and credit, and would expand the hate- crimes statute. Thirteen states and more than 130 cities nationwide have passed similar legislation.

A majority of lawmakers in both the House and Senate cosponsored the bill last year, but it never came up for a vote. Representative Carl M. Sciortino Jr. of Medford, a lead sponsor, said the political climate changed dramatically after Scott Brown won the special election for US Senate in January 2010.

“The level of willingness to take up controversial votes diminished after that,’’ Sciortino said.

The issue became particularly charged a year ago, when Republican gubernatorial nominee Charles Baker derided the legislation as “the bathroom bill,’’ a term opponents use to reflect their belief that it would give sex offenders greater access to children in public bathrooms by effectively making the facilities unisex. Supporters of the bill say that is not true: People would still have to use bathrooms that match the gender they present.

Kris Mineau of the Massachusetts Family Institute, which opposes the bill, said yesterday that his organization remains concerned about “the privacy, safety, and modesty of all citizens.’’ He said there is no need to broaden the state’s nondiscrimination and hate-crimes statutes.

He noted that the number of sponsors had declined markedly this year — from 81 to 52 in the House and from 23 to 16 in the Senate, according to the website of the Massachusetts Transgender Political Coalition.

Gunner Scott, the coalition’s executive director, said 35 former cosponsors either did not run again or were not reelected. Supporters of the legislation are talking to freshmen and hope to find additional support, he said, adding that the bill still has more cosponsors than about 95 percent of other bills.

Representative Byron Rushing, another lead sponsor, said religious groups supporting gay rights showed their political strength in 2007 when they helped defeat a proposed ban on gay marriage. “I think what religious groups offer is their theological perspective on justice . . . but it’s also very important that we hear from those denominations that have begun to end discrimination against transgender people within their own denomination,’’ he said.

Other religious groups, including the Massachusetts Conference of Catholic Bishops, fought against the gay marriage bill in 2007. The bishops also opposed the transgender legislation last year.

About 135 clergy are publicly supporting the bill this year, according to the Interfaith Coalition for Transgender Equality. The coalition this week is asking congregations to work for its passage. Appearing with Shaw yesterday were the Rev. Cameron Partridge, a transgender man who is interim Episcopal chaplain at Harvard; Rabbi Joseph Berman of Temple B’nai Israel in Revere; and Sean Delmore, a transgender man who is assistant minister at the College Avenue United Methodist Church in Somerville.

Shaw acknowledged that it might be tougher to rally as large a coalition for transgender rights as for gay marriage, if only because relatively few heterosexual people know someone who is transgender.

Getting to know transgender people personally, he said, has “taken me deeper into my own faith life and proved to me once again that unless everyone has equality . . . nobody is really free.’’