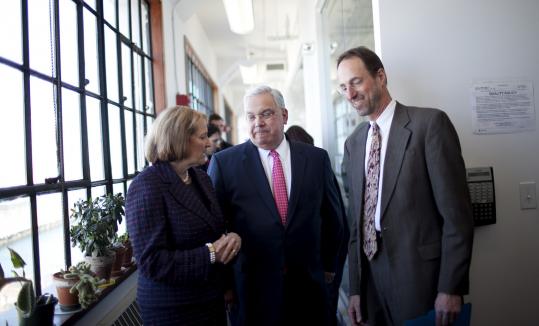 The visit by the head of the Food and Drug Administration and the Small Business Administration was one of a series of trips planned by the Obama administration to meet with business owners across the country about ways to reduce regulatory hurdles and encourage entrepreneurs. It also cast a welcome spotlight on Menino’s effort to attract technology companies, medical firms, and other new businesses to the 1,000 acres that his administration first dubbed the Innovation District in his 2010 inaugural address.

Riding a green and orange trolley with their visitors, the mayor’s top aides boasted about the dozens of companies thriving in the refurbished brick warehouses near Fort Point Channel. They talked up the district’s more than 50 restaurants and retailers. Pointing to a sea of parking lots, Boston’s city planner, Kairos Shen, recalled the rattle of long-gone rail yards and described the potential for more than 20 million square feet of development.

“I think you’ve got a hidden little gem here,’’ said Karen G. Mills, administrator of the Small Business Administration, during a stop at Immunetics, a biotech firm that develops blood tests to identify HIV, Lyme disease, and other ailments.

Menino grinned and cracked a joke about Immunetics and other cutting-edge companies that have settled in this part of the city, such as Ginkgo BioWorks and SatCon.

“I wonder if they pay their advertising companies more to come up with these crazy names?’’ Menino quipped as he sat at a table next to FDA Commissioner Dr. Margaret A. Hamburg.

The mayor took Hamburg’s presence as an opportunity to highlight , a Cambridge-based drug maker that has agreed to relocate to the Innovation District if the FDA approves the company’s Telaprevir, a treatment for hepatitis C. Although Menino did not mention that the deal was contingent on FDA approval for the drug, he said that Vertex promised to bring 1,500 jobs to Boston.

Asked about Menino’s subtle lobbying effort, Hamburg smiled but said she could not comment on any drug in the approval process.

“That’s not how drugs are approved,’’ Hamburg said, adding that she joined the trip to Boston because the FDA wants to work with industry and academia, “to support the science that underpins the availability of new, better, and safer products.’’

City officials said yesterday morning that over the last 12 months, at least 29 new companies have moved to the Innovation District, which accounted for roughly 1,100 jobs. As the tour began, Menino’s aides received an e-mail about a new lease inked on Summer Street: 14 small companies with a total of 40 employees would be sharing space under the name Greentown Labs.

Although start-ups, cutting-edge businesses, and hip restaurants continue bubbling up, the waterfront has not yet become the new urban landscape envisioned by city planners a decade ago. Some gleaming buildings have risen, but other major projects have yet to break ground. The influx of new companies has created considerable buzz, but most of the arrivals employ only a handful of workers.

Immunetics has a staff of just over 30. So does Heartland Robotics. AisleBuyer has roughly 25 employees working on its technology that allows shoppers to skip the checkout at stores by scanning and paying for goods with their mobile phones.

Thomas J. Hynes Jr., chief executive of the real estate firm Colliers International Boston, said that after decades of work, the long-range potential of the area is starting to take hold. Hynes said his company is in the process of signing a Web-based company to a lease in the Innovation District and he discovered that two other similar businesses were vying for the same space.

“Waterfronts take great patience during impatient times,’’ said Steven Cecil, whose Boston-based architecture and design firm specializes in waterfronts. “But we’re all observing and supporting fulfillment, which will also take some time. But it’s ready.’’