In census, a decade of growth by state’s minorities 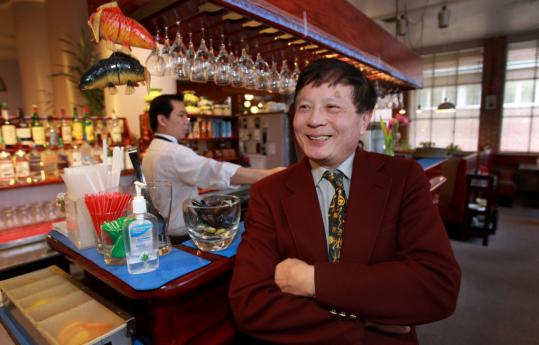 Robin Ong said he has seen an influx of Asian customers at his Lexington restaurant, many of whom work in biotech firms. “The ratio of Asians to Americans has increased,’’ he said. (Barry Chin/ Globe Staff)
By Peter Schworm and Matt Carroll Globe Staff / March 23, 2011

Massachusetts grew more racially diverse over the past decade amid a surging number of Asian and Hispanic residents and a slight decline in the white population, according to new figures from the US Census Bureau.

The Asian and Hispanic populations both climbed 46 percent from a decade ago, while the number of blacks rose 26 percent. The number of whites fell almost 2 percent, according to the government’s decennial population count released yesterday.

Statewide, the number of minorities rose approximately 40 percent, from about 1 million to 1.4 million. About 80 percent of Massachusetts residents identify themselves as white, 6.6 percent as black, and 5.3 percent as Asian. Slightly fewer than 10 percent say they are of Hispanic or Latino origin.

The new tallies, used to determine representation in Congress and funding for many government programs, are the most detailed and accurate counts of population and race the census provides. Unlike estimates in the census’s American Community Survey released in December, yesterday’s figures were determined by counting every individual in communities. The data shed light on a host of demographic shifts, most notably the sharp increase in people of color.

Shifts were seen in cities and suburbs alike, demographers said. In 65 communities across the state, the nonwhite population rose faster than it did statewide, according to the Metropolitan Area Planning Council, a nonprofit planning agency that began analyzing the figures yesterday.

Robin Ong, who is Asian and has lived in Lexington for 20 years, said he has recently seen an influx of Asian residents who often work in the biotech or pharmaceutical industries based in Boston and Route 128.

“We have noticed a lot of newcomers and families,’’ he said, referring to patrons of the Chinese restaurant he owns in the town. “The ratio of Asians to Americans has increased.’’

The minority population also climbed in Boston, solidifying its status as a “majority-minority’’ city with 53 percent of the total. A decade ago, the nonwhite population passed 50 percent for the first time.

The ranks of Asians and Hispanics in Boston rose to 9 percent and 17 percent, respectively, while blacks made up 24 percent.

Boston grew by almost 5 percent from 2000, a much sharper increase than the previous decade. Mayor Thomas M. Menino said the increase, from 589,000 to nearly 618,000, reflected the city’s quality of life. “It shows it’s a livable city,’’ he said. “People feel like it’s a good place to raise their families.’’

City demographers planned to analyze the census results by neighborhoods in the coming days and weeks to determine how the city’s population has changed by age, race, and other factors.

After years of losing residents to the suburbs and other parts of the country, a number of Massachusetts cities regained population, with nearly 25 percent of the statewide increase taking place in Boston and four other cities — Worcester, Revere, Lawrence, and Quincy. Cities including Lowell, New Bedford, Salem, and Springfield also saw increases.

“A lot of cities in Massachusetts are recovering,’’ said Marc Draisen, executive director of the planning council.

Overall, the state’s population climbed 3 percent to more than 6.5 million.

In eight cities, minority groups are now more than half the population, Draisen said. Boston, Lawrence, Chelsea, and Springfield crossed the threshold in 2000, and Brockton, Holyoke, Lynn, and Randolph did in the current count.

The growth of minority groups is likely to continue, demographers say. Kenneth Johnson, a senior demographer at the University of New Hampshire, said that the white population in Massachusetts declined by 213,000 over the past decade and that 173,000 of those were children.

A decade ago, 75 percent of children under 18 were white. In 2010, it had dropped to 67 percent, suggesting that minorities will continue to claim a growing share of overall population.

“It’s the kids that will really make the difference,’’ he said.

Most states across the country are experiencing a similar pattern, Johnson said.

While Massachusetts grew far more modestly than many states in the South and West, costing it a seat in the US House of Representatives, the nation’s recession spared it from losing more residents to other parts of the country, Johnson said. Earlier in the decade, estimates showed that Massachusetts was steadily losing residents.

“A lot more people are staying put,’’ he said. “The recession benefited places that were losing lots of people. Fewer went to Florida, North Carolina, and Arizona.’’

Since 2000, more people have probably moved out of Boston than moved in from other parts of the country, said Johnson, who attributed the city’s population increase to immigration and natural growth.

Among counties, Worcester County grew the fastest at 6.3 percent, with communities such as Charlton, Dudley, Grafton, Northbridge, and Uxbridge also seeing sharp climbs. Upton held the distinction of the highest percentage growth in the state, climbing 33 percent to 7,542 residents.

Other communities that grew considerably were Oak Bluffs, whose population rose 22 percent to 4,527; and Grafton, where the number of residents surged 19 percent to 17,765. Suburbs such as Middleborough, Hopkinton, Hingham, and Raynham all saw substantial growth.

By contrast, many communities in Cape Cod — from Provincetown to Falmouth — lost residents, as did Rockport and Gloucester. Lincoln’s dropped the most, falling 21 percent to 6,362.