Near Pilgrim, some shrugs, some fears 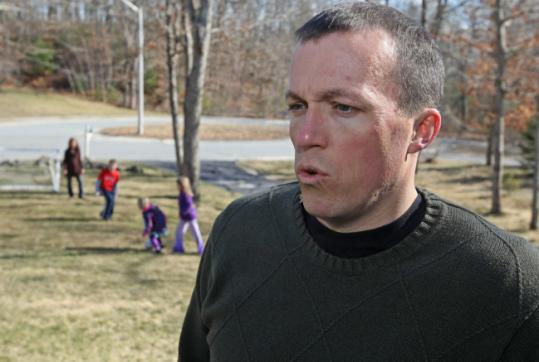 Chris Campbell of Plymouth said he does not believe the Pilgrim plant presents a danger to the community. (George Rizer for The Boston Globe)
By Travis Andersen Globe Staff / March 14, 2011

PLYMOUTH — Residents who live near the Pilgrim nuclear power plant were mostly philosophical yesterday when asked if the nuclear crisis in Japan has them worried about a similar catastrophe unfolding in their town.

“We’re close enough that we’re not getting out of here’’ in the event of a meltdown, said Steve Doherty, 62, who lives with his wife about a half-mile from the plant.

Doherty said he trusts that safeguards against the potential for human error are a priority at the plant.

He has some friends who work full time at Pilgrim, he said, and others who have worked there for building con tractors and they were impressed with “the in-depth background checks [required], which I personally am all for.’’

And anyway, Doherty said, the energy Pilgrim provides comes at a cost. “Everyone wants the power, but they don’t want the plant in their backyard,’’ he said.

But Nicole McKenna, 38, who lives nearby, conceded that the devastation in Japan has frightened her. “It’s pretty scary,’’ she said. “Just that [the Pilgrim plant] is so close that it could make a huge impact.’’

Like many residents, McKenna pointed out that the town regularly tests its emergency notification and evacuation procedure, which includes warning sirens, reverse 911 calls, and mapped-out escape routes for drivers along Route 3 and other main roads.

And, she said, parents are asked to sign permission slips allowing their children to take medication in the event of plant-related emergencies. Asked if she has signed the slip for her daughter, a high school senior, she said, “Oh yeah, that’s for sure.’’

Chris Campbell, 39, the assistant superintendent of schools for Plymouth, who lives near the plant with his wife and their three children, said that in an emergency, students would get potassium iodide pills and be taken to emergency evacuation sites in Taunton and other locations.

Campbell is on a safety committee including school, town, and public safety officials that regularly reviews emergency procedures related to the plant. He said he does not believe Pilgrim presents a danger to the community, even though the very mention of nuclear power makes some people uneasy.

“I think when people think nuclear power, they think of nuclear war and nuclear disease,’’ he said.

On Friday, a spokesman for the plant told the Globe that the facility was designed to withstand earthquakes and has adequate backup systems.

But local officials are still trying to learn as much as possible from the disaster in Japan, according to Fire Chief G. Edward Bradley. He said in an e-mail that Plymouth’s sister town in Japan, Shichigahama, was devastated by the tsunami.

“We are also watching and discussing the reactor issues and how we can learn from Japan’s problems, especially as it relates to emergency planning for Pilgrim,’’ he said.

Town Manager Mark Stankiewicz said in a phone interview that the town’s emergency planning is appropriate for Plymouth, which is not a “high earthquake zone like Japan or California.’’

“Obviously if you have an emergency of the magnitude of Japan, logistically even the best of plans are going to be difficult,’’ he said.

Stankiewicz said he attended part of an all-day hearing in town on Wednesday before the Nuclear Regulatory Commission concerning an application from , which owns Pilgrim, to renew the plant’s operating license. He said it was not immediately clear when the NRC would rule on the application, which has been pending since 2006.

Meanwhile, Dinky Dawson, standing outside his home near the plant, echoed what many said yesterday: Although the town runs emergency drills often, if a catastrophe strikes, “there’s nothing you can do about it.’’

“If you get an earthquake like that, forget about it,’’ he said. “This whole area would be gone, all of the South Shore.’’

Resident Heather Cole, who has lived near the plant for 15 years, said she would not even leave in the event of an emergency, preferring instead to “grab a six pack’’ and dig in her heels, in part because she feels the evacuation would be “a nightmare.’’