Waiting on the other side

Boston-area residents with links to Japan yearn to communicate 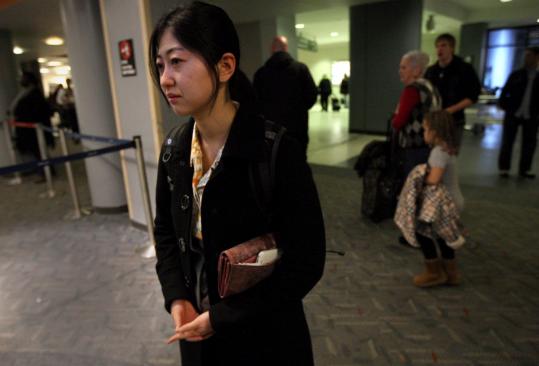 Shoko Takemoto returned to Logan airport from an interview trip to Japan. She was in Kamakura when the earthquake struck, and spent Friday night in a shelter with her sister feeling the aftershocks. (Bill Greene/ Globe Staff)
By Megan Woolhouse Globe Staff / March 14, 2011

Even Shoko Takemoto, an MIT graduate student who studies disaster planning, could not have been prepared for her visit to Japan last week.

In Tokyo for a job interview, she had just finished lunch with her sister in the small seaside town of Kamakura 50 miles south of Tokyo, when the ground under their feet began to shift and shudder.

“In Japan, we have earthquakes all the time, but usually they stop really quick,’’ said Takemoto, 27. “This one kept going. It just didn’t stop.’’

The steady roaring of the earth and sounds of shattering glass and tile continued as the enclave famous for its Shinto shrines experienced one of the worst natural disasters in the nation’s history.

By Friday’s end, Takemoto and her sister were among hundreds of thousands of people across the nation taking refuge in emergency shelters. Officials said yesterday that more than 1,800 people were confirmed dead, but thousands remain missing and the toll is expected to rise to well over 10,000. About 1,900 people are known to be injured.

Takemoto and her sister spent Friday night in the shelter on thin mats, kept awake by the constant aftershocks and their worries for the safety of family and friends. Yet in the days following the earthquake, information about those missing has been scant for those in Japan and abroad.

Takashi Aoki of the Japanese consul general’s office in Boston said traditional lines of communication have been hampered by the earthquake and subsequent tsunami. About 10,000 people from Greater Boston — and 18,000 from across New England — currently live in Japan, yet he said it remains unknown how many, if any, were killed or injured in the disaster. Calls have been pouring in from desperate parents, students, and relatives of those living in Japan, with more than 100 on Friday.

“Many Japanese and many American people were worrying about family and friends,’’ he said.

“But we don’t have any information, no information, because there are many problems with communication right now. It’s a big problem.’’

As of yesterday afternoon, Sherre Greenbaum of Wayland had received one brief e-mail from her daughter, Alia. The 25-year-old is in her fourth year as a language teacher in a rural village 20 miles from Sendai, the epicenter of the massive earthquake.

Greenbaum said she received her daughter’s e-mail on Saturday sent from a friend’s cellphone. It said her own cellphone battery had run out, that she was fine, and little else.

“We’re trying to e-mail her,’’ her mother said yesterday, “but there’s no response.’’

But Greenbaum said she learned from US Representative Niki Tsongas’s office yesterday that the town where her daughter lives will not be evacuated. It is about 80 miles from a nuclear power plant that was damaged in the earthquake. Greenbaum said she was counting on Tsongas’s office for more information. She has also been tracking down the US parents of her daughter’s friends who are in the same teaching program.

She avoids dramatic TV news accounts, she said, but does not want to leave her computer and miss an e-mail from her daughter or new information. Waiting, however, has been agonizing.

“I just want my daughter to come home,’’ she said.

Since Friday, gatherings of people have offered support, prayers, and financial relief. On Friday night, Japanese student associations from various colleges, including Harvard, Tufts, and Boston University, met at MIT to discuss ways they can help. A group of doctors from Massachusetts General Hospital was making plans to travel to Sendai to help with relief efforts. And in Somerville, the Boston Japanese Christian Church prayed yesterday for those who lost their lives.

“I think the long-term effects on the emotional and spiritual kinds of things will be the issue down the road,’’ Milhous said. “I think Japan will continue physically but I pray for the Japanese on the emotional side.’’

Takemoto said her sister was able to reschedule her flight out of the country, and yesterday she arrived at Logan Airport in the late afternoon.

Her plans to return to Japan after graduation remain intact.

“I was thinking as I was flying back, I do want to live closer to my family,’’ she said.

Globe correspondent Michele Richinick contributed to this report. Megan Woolhouse can be reached at mwoolhouse@globe.com.