In early 2007, just weeks after taking office, Deval Patrick seriously considered resigning. His wife, weeping and unable to sleep, had been admitted to McLean Hospital with depression. Rather than savoring his election as the first black governor of Massachusetts, Patrick and his wife were dreading four years in the public eye.

In his soon-to-be-released memoir, “A Reason To Believe,’’ an uncorrected proof of which was obtained by the Globe, Patrick also reveals that he failed the bar exam twice, and that he and his wife, Diane, were rejected — “blackballed,’’ he says — by The Country Club, a famously exclusive retreat in Brookline.

These and other previously unknown details of the governor’s public and private life are recounted in the 227-page volume, which introduces Patrick to a national audience as an inspirational figure guided by optimism and hope who presaged the rise of President Obama.

Patrick warns readers in the acknowledgments that the book is not “a kiss and tell’’ and “will disappoint those who expected it to be about the rogues and rascals I have met in public or corporate life.’’

Most of the book dwells on his early life. He vividly recalls rising from poverty on the South Side of Chicago to the walnut-paneled boardrooms of corporate America, to Washington and then the Massachusetts State House.

Freely quoting Scripture to bolster his support for same-sex marriage and sensitivity toward illegal immigrants, the governor touches on his unabashed support for liberal causes. He also delves into his friendship with the president, revealing that shortly after Obama took office as a US senator in 2005, Patrick sat on a brown leather sofa in Obama’s Washington office and scored his “first major political endorsement’’ for governor.

Patrick uses the book to settle some scores, albeit gently, and to frame and interpret his own life story in politically flattering terms. His stints as a highly paid general counsel at and Texaco, for example, are portrayed as extensions of his commitment to social justice. He highlights his work pushing Texaco to acknowledge global warming and settling charges of worker mistreatment at a Coke bottling plant in Colombia.

But some of the most revealing passages describe Diane Patrick’s battle with depression and the toll the governor’s first campaign took on their marriage. He says negative coverage in the newspaper of his campaign and early days in office was like “kryptonite,’’ for his wife.

“We had long conversations about the possibility of my resigning and resuming our private lives,’’ Patrick writes. “There were moments when I was willing — being governor is an episode in my life; Diane is my life — but she didn’t want to feel responsible for giving up something we had worked so hard for. There were other moments when Diane, imagining the resumption of her role as first lady, asked me to quit, but I said we should wait to decide until she got out of the hospital.

“Ultimately, we decided together that I would continue as governor, and it was for the best. If I had resigned, it would have appeared as if the pressures had forced Diane into the hospital and me out of office.’’

Patrick received a $1.35 million advance for the book, which he negotiated in March 2008. It is slated for release in April.

Published by Broadway Books, a division of Random House, the memoir marks a new phase of his public life, as he begins to step out more on the national stage. Patrick has said he plans to travel more in his second term. The book does not address speculation that the governor may seek higher office.

Promotional materials promise that Patrick will do national television and radio appearances and tour four cities — Washington, Chicago, New York, and Boston — to sell the book once it is released. The publisher will promote it on blogs and with “buzz mailings to special interest groups.’’

The close links with Obama detailed in the book position Patrick as a potentially significant spokesman for the president, as Obama gears up for his reelection campaign. Patrick writes of sharing dinner with the Obamas on Martha’s Vineyard and being invited backstage at a Denver football stadium immediately after Obama delivered a soaring speech accepting the Democratic nomination in 2008.

“Was it all right?’’ Obama asked Patrick.

The governor, deeply moved by the speech, just nodded.

The message is uplifting, in keeping with Patrick’s political style. The book is studded with anecdotes about the dignity of bus drivers, house cleaners, and other unheralded figures he says have inspired him, as well lessons learned from his family.

Yet the governor also writes candidly about race, recalling how an English teacher at Milton Academy once called him a “nigger.’’ Later, describing how he eluded media attention with his wife at McLean, Patrick says he has noticed that, as a black man, if he wears jeans, a casual shirt, and a cap, “people will often look right past you.’’

In defending his support for gay marriage, Patrick mentions, only in passing, that his daughter, Katherine, is gay. Instead, he excoriates opponents in the “radical right,’’ saying they promote a “deeply un-Christian agenda.’’

“When they speak of faith,’’ he writes, “it seems obscene.’’

Patrick does not detail much from his first term or recent reelection campaign. But in recounting the attacks of his 2006 campaign and his first tumultuous days in office, he writes that “nothing is as humbling or as insidious as political life.’’

Patrick recalls how the Globe, in a story about his considerable real estate debt, published aerial photos of his sprawling home in the Berkshires, which prompted one of his opponents in the 2006 Democratic primary to label the house the “Taj Deval.’’

“As if Ted Kennedy, or Mitt Romney or John Kerry could own a nice home, but not Deval Patrick,’’ he writes.

When the Boston Herald described a Cadillac that he leased after taking office as “tricked out,’’ his wife and others felt the description was racist.

The barrage of attention, he writes, helped trigger his wife’s depression, making it difficult for her even to smile for their official portrait.

She broke down in March 2007, nine weeks after the inauguration, when he told her just before they went to bed that the Globe was publishing a story about how he had interceded on behalf of Ameriquest Mortgage, as the controversial subprime mortgage lender sought urgent financial assistance from Citibank. Patrick, a former Ameriquest board member, says his actions were “innocent but dumb.’’

“Diane awoke after a fitful sleep,’’ he writes. “She nudged me awake and said she just couldn’t face another critical story. She began to cry and shake.

“When I asked her what was wrong, she said, ‘I just hate this. I hate this. This is what the next four years are going to be like.’ ’’

Diane Patrick, a prominent labor lawyer who has since spoken openly of her recovery, was not suicidal, he writes, but she needed to get “away from this reality.’’

A state trooper drove them to McLean. Diane held her husband’s hand, and “kept repeating, ‘I’m so sorry, I’m so sorry.’ ’’ 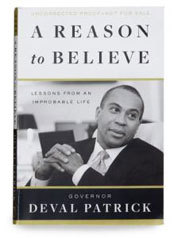