Putting a price on antique printing

Presses, lead letters, and other contents of old North End plant going up for auction 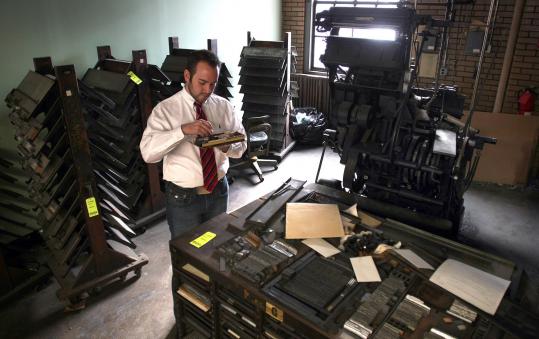 Auctioneer MatthewPaine looked at old lead letters near a linotype press at the defunct printing plant in the North End. The items will be auctioned. (John Tlumacki/ Globe Staff)
By Andrew Ryan Globe Staff / January 31, 2011

If the city of Boston had an attic, crammed with faded images and forgotten relics, it would be on North Street in a red brick building that housed the now-defunct municipal printing plant.

The factory closed last summer after 78 years, and the linotype machines and letter presses will go on the auction block in late February along with artifacts from generations of producing permits and birth certificates.

Row after row of creaky oak drawers hold thousands of letters, both metal type and wooden blocks, from fine print to 72-point Tudor. A cigar box brims with square block stamps of the city seal. And there are metal etchings of a few of the city’s forefathers, presumably used years ago to print their faces on official documents.

One picture bears the label “Clem Norton,’’ the Hyde Park political legend whose 1979 obituary led with an anecdote about him meeting a “bright-eyed lad named John Fitzgerald Kennedy’’ at a birthday party for his grandfather, John (Honey Fitz) Fitzgerald, former mayor of Boston. Another 1-inch by 1 1/2-inch etching captured the unmistakable mug of Lawrence S. DiCara, a former City Council president.

“I think I’m far too young to be considered a historical relic,’’ the 61-year-old DiCara said Friday, noting that he had defeated one of the younger members of the current City Council on the squash court that morning.

The etchings, city seals, and alphabet after alphabet of dusty type will be sold as a single lot along with oak cabinets and other accoutrements of old-fashioned printing. That means a bidder cannot buy just a single object, such as the curving block of Old English type that says “The City of Boston.’’ If someone really wants, for instance, that etching of Norton or DiCara, it will come with enough equipment to fill an antique print shop.

“We’re selling the room,’’ said Stanley J. Paine, principal of a family-run auctioning company handling the sale. “It’s all antique. All of it. Everything has its own particulars and story.’’

The sale will include about 200 lots, from a row of oak file cabinets from the 1930s or 1940s to an Art Deco-style grandfather clock made by . The auction will comprise plenty of modern printing equipment, including paper cutters, collators, saddle stitch staplers, and even a massive Heidelberg four-color press.

Mayor Thomas M. Menino’s administration shuttered the plant last summer to cut costs. At the time, officials estimated that the move would save an estimated $800,000 this fiscal year and $1 million annually going forward. The closure resulted in four layoffs, according to the mayor’s office, and other plant employees retired or transferred to other city departments.

The sale at 11 a.m. on Feb. 24 will occur in the factory at 174 North St. and simultaneously online at BidSpotter.com. The auctioneers — who include Paine, his wife, and three sons — expect a mix of commercial printers and antiquers. The public is invited.

Some may be looking for an old-fashioned platen press with a hand lever and foot pedal. Or one of the gangly Linotype machines that stand 6 1/2 feet tall and still have silver-colored mounds of shaved lead where operators once placed their feet.

“I don’t know the age of them, but they come from the days of Ben Franklin, in terms of the process,’’ said Paul R. Dennehy, who was superintendent of the graphic arts department when it closed. “I used to run them in the ’60s, and they weren’t new then.’’

Others may be interested in an old piece of Boston or an artifact from how all words were once printed. Take Bruce Blake, whose grandfather was a journalist and his father a printer.

In Blake’s childhood bedroom in Rochester, N.H., he has his name spelled out in lead type. The 47-year-old also used the services of Boston’s printing plant when he worked for the Boston Police Department.

“I have interest, but I’m not sure how many people there are like me,’’ Blake said of the sale, adding in an e-mail, “Perhaps ink is in my veins?’’