Queues got you blue? Line up here ... 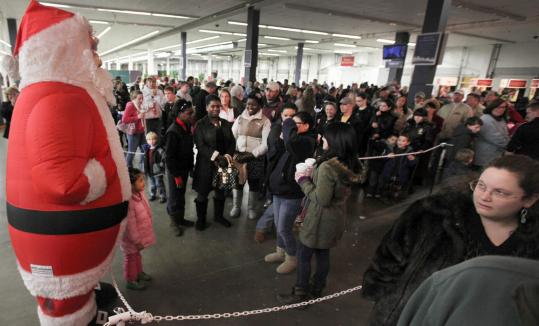 The Enchanted Village at Jordan’s Furniture in Avon is really two holiday traditions wrapped in one.

First, there are the retro animatronics of the Enchanted Village itself.

Then there’s the line. On a busy day, it can take over 90 minutes just to get in.

Lines are everywhere during the holiday season: at the post office; at the mall; on the highway trying to park to get in the mall.

They are a world-class bane, but in recent years some retailers and engineers have begun paying increasing attention in an effort to make lines more efficient and, perhaps, pleasurable. It’s called queuing theory.

The situation at Jordan’s is a classic case study of why lines form: a short-term imbalance between demand and supply of service. Jordan’s has something a lot of people want — the Enchanted Village, the no-fee Boston holiday icon that for generations stood in the windows of Jordan Marsh in Downtown Crossing. It manages the demand with a serpentine line (an idea that was pioneered by Wendy’s and Delta Airlines decades ago) that guarantees the first one in the line will be the first one served. Studies show that people will wait longer for that promise of fairness.

But it is parallel lines, such as those found at a supermarket where carts make a serpentine line difficult, that are the real stress-inducers, according to Dick Larson, an engineering professor at MIT who has become known as “Dr. Queue’’ for his work in queuing theory.

“You have the regular lines, you have the 12-items or less lines, and you have the self-checkout lines, and so people do their own queue calculus to see how they can get out fastest,’’ Larson said. “You start looking at the people in the lines, at how much is in their carts, on how efficient you think they’ll be when it’s time to pay.’’

The game Larson calls “queue calculus’’ is a gamble where the odds are stacked against you; statistically, someone who joins a neighboring line after you is likely to be served before you, Larson said, which can create the feeling of being cut in line.

Even where long lines are unavoidable, many specialists believe that stress can be alleviated. Disney’s amusement parks are often cited for their work in this area. “It’s as if they’ve found the psychological component that keeps you from being miserable,’’ said Kim Button, the author of “The Queue Line Survival Guidebook.’’

Disney has specialists who focus on changing the way customers experience lines, from breaking the line into smaller sections that are not visible to each other, to creating the illusion that the attraction starts in the line, with costumed characters and videos. Disney also pioneered the use of signs at the beginning of lines that tell you how long the line will be (Disney always overestimates that time, so that when visitors arrive at the ride earlier, they think they’ve made out).

Another queuing innovator is Apple, which has simply gotten rid of lines altogether in its retail stores. When customers enter the store, an Apple specialist will greet them, assist them, check them out with a handheld device, and e-mail the receipt. Customers with an Apple Store app on their iPhones are sent a photo of the specialist assigned to help them when they enter the store.

“Other companies should pay attention to Apple,’’ Dr. Queue says, “because they sell more per square foot than almost any other store on the planet.’’

Even the Internet doesn’t remove lines. There can be queues for movies and virtual lines to buy tickets to an event.

What the Internet does not offer, experts say, is the inherently gregarious experience of standing in line, which is one of the few places left where you can have a conversation with a stranger. You share a stress (the line) and a desire (whatever it is you’re waiting in line for) with those around you, and that gives you something to talk about.

Of course, the queue where people spend the most time is one where communication with strangers happens via hand gesture: traffic. During the holiday season at the Wrentham Premium Outlets, customers can often spend over an hour just waiting to get off I-495, an experience all the more infuriating because of drivers who cut in.

“I hate when people cut me. They insult me,’’ Marcia Campos, a 39-year-old from Everett, said on Sunday after she’d made it into the line at the Wrentham food court (she’d chosen the Healthy Choice line because the line at Sbarro was too long).

“I let people cut in if they ask. If they don’t ask, I will crash my car but they will not cut me.’’

At Jordan’s, Christine Fleming and Stacey Leone, both of Reading, had made it through the Enchanted Village with their children, and reached the end of the line.

There they were greeted with . . . more lines. Six of them. They could wait for Santa, to play the Reindeer Games amusement, to go to the laser light show, to see the Polar Express 3D movie, or to buy a snack at the concession stand. They could also wait in a line to buy photos of themselves taken while they were waiting.

As Fleming and Leone waited for the laser show, they talked about how lines are just something you have to live with during the holidays. Fleming recently spent two hours waiting to visit Millis Wonderland, a light display on a family farm that was once named the best holiday display in America by “Today’’ (when that happened, in 2004, the line was up to six hours).

“You know what? It was worth it,’’ Fleming said, before uttering a refrain many in Jordan’s had uttered. “You do it for your kids.’’ With the laser show about to begin, their kids seemed in no rush for the line to be over. They’d figured out, all by themselves, how to make it a pleasurable experience.

They were using the metal guide rails as a jungle gym.