For many in Massachusetts, it’s a postal disservice

From Berkshires to Boston, patrons bemoan inconvenience brought about by office closings 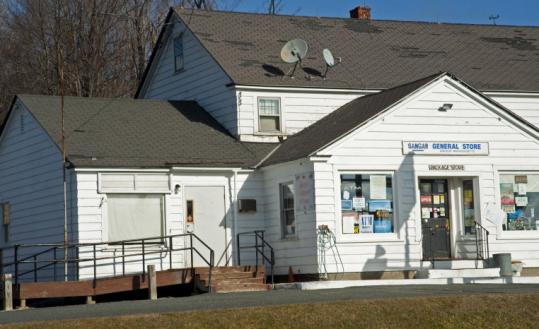 The Post Office in Windsor, in business for 113 years, was located most recently inside this general store. (Nancy Palmieri for The Boston Globe)
By David Abel Globe Staff / December 11, 2010

For 113 years, the Post Office in Windsor brought people together in the small town in the Berkshires, providing a place to chitchat, do business, and send their precious parcels where they needed to go.

But this fall, to the dismay of many of the town’s 900 residents, the US Postal Service closed its local branch, located most recently inside a general store.

“It’s a subject that’s really upsetting to a lot of people,’’ said Rebecca Herzog, who serves as the town’s treasurer and tax collector. “It’s extremely inconvenient to have to go to the next town, especially with winter coming.’’

As the Postal Service struggles with financial woes and as mail volume plummets with the turn to texting and e-mail, it is closing an increasing number of post offices. A little more than a century ago, when there were only 45 states and the nation had a quarter of its current population, there were 71,000 post offices, double today’s number.

The cuts have been accelerating, and this year there are 742 fewer post offices across the country than last year, more than three times the number of offices that were closed last year and substantially steeper cuts than at any time in the past 15 years.

In the Boston area, where there are 296 post offices, the Postal Service closed its historic branch in Faneuil Hall this year and plans to shut down its 27-year-old branch at Boston University and the modular office it has had for years at Logan Airport.

In addition to its outpost in Windsor, the Postal Service has in recent years closed offices in Charlton and on Otis Air Force Base in Buzzards Bay.

“Action is necessary at this time,’’ said Dennis Tarmey, a spokesman for the Postal Service in the Boston area, who added that he expects more closings. “The closing of post offices is one of those necessary fundamental changes.’’

He said the Postal Service must act because it does not receive tax dollars for operating expenses and lost $8.5 billion as mail volume dropped 3.5 percent in fiscal 2010, which ended in September.

The recession and the rise of electronic communication have taken a toll, he said, but “there is no single solution to our financial situation. We need to change our business model.’’

The news of the impending closure of the branch at Logan Airport, which had to pay more than $100,000 last year to rent its space in a modular building beside the new economy parking lot, has angered longtime patrons, many of whom work for the Massachusetts Port Authority.

What they like about the branch, which last year lost more than $16,000, is probably what is forcing its closure.

“The problem is that they have moved it around the airport so many times nobody can find it,’’ said Phil Chiaramonte, 58, who bypasses long lines at the larger post office in East Boston to send multiple packages a week he sells through . “Nobody really knows this place exists. They should start advertising it, before they close it.’’

Parking is free, which makes it easy for those carrying large packages, and there are 300 post office boxes accessible by a door that never locks. The branch used to be staffed 24 hours a day but had its hours cut when travel declined after the attacks of Sept. 11, 2001.

Jim Dunyon is the last counter clerk at Logan, where the branch is now open just 25 hours a week.

At Boston University — where, over the years, thousands of students have entrusted the uniformed staff behind the scuffed desks with everything from school and passport applications to luggage and love letters — students and staff are fuming.

For more than a decade, Nancy Paine has sold them stamps and money orders and ensured that the mail got out on time and in the right bins for those who found their way to this basement branch in the university’s student union.

“I’m heart sick about it, in total denial,’’ said Paine, 56, who has worked for the Postal Service for 30 years and is not sure whether she will have a job if the office closes as planned in January. “There is such a bond we have with the people who come here, especially the kids. I’ve had to teach many of them how to mail a letter, now that they’re all texting.’’

Many decades-long patrons of the Post Office are upset the university did not do more to protest the closing of a branch that last year earned a profit of $172,000. They point out that other local schools — including Harvard, MIT, Tufts, Babson, and Boston College — fended off similar closing plans by cutting rent.

“It’s terrible, awful,’’ said Margery Ehrlich, 72, a university librarian who was one of a group of people who wrote letters to the school and postal administrators, urging them to reconsider. “This Post Office is part of our community. It’s not fair we’re the only university losing our Post Office.’’

University officials said they tried to stop the closing, but Tarmey said he never heard from them.

He said they did not respond to multiple messages over the past year that might have led to a deal to defray the $19,000 the Postal Service pays BU in rent.

“I reached out, but I did not hear from them,’’ Tarmey said. “It’s surprising to hear that they would say they appealed it.’’

Paine, who has worked the counter at BU for 12 years, will miss watching students nervously hand over everything from stacks of graduate school applications to luggage too expensive to take on an airplane to erroneously addressed letters, which she has routinely corrected for them.

Then there are all the familiar faces who have become like family.