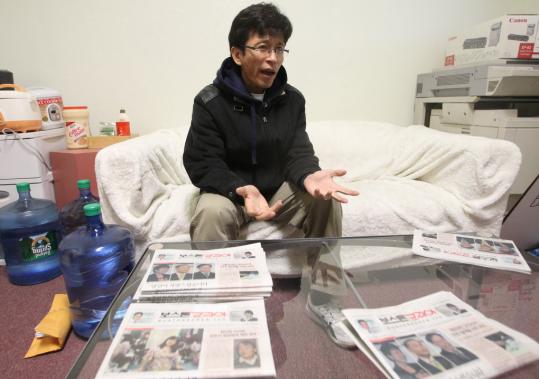 As soon as he heard that North Korea had launched a surprise artillery attack on his homeland earlier this week, Soungdae Yang phoned his family on Jeju Island, South Korea.

Stock up on emergency supplies, the worried son told his parents, and buy extra food. He wanted them to prepare in case the two Koreas went to war.

But their response came as a surprise to Yang, 40, a graphic designer at BostonKorea, a newspaper and website for the Korean community in the area.

“My parents did not care,’’ he said at the publication’s office in Allston. “They are worrying a bit, but they are living a normal life.’’

As North Korea warned yesterday that it would unleash a new “shower of dreadful fire’’ on the South if it made good on plans to hold military exercises with a US naval force on Sunday, Koreans in the Boston area expressed fear for the safety of loved ones living back home.

After frantic phone calls and e-mails, they were reminded of how South Koreans have grown accustomed to living under the constant threat of conflict from the heavily armed, reclusive North.

And though analysts warned that the current confrontation, which began when four people were killed Tuesday in a North Korean artillery attack on the South Korean territory of Yeonpyeong Island, represented a dangerous escalation, concerned South Koreans here encountered a sense of calm in the face of crisis.

“I think we are used to it,’’ said Hyerin Kim, a 20-year-old native of Gumi, South Korea, who was serving Korean dumplings at Color restaurant in Allston. Kim, a sophomore studying piano at Berklee College of Music, said she went to a Korean-language news website to read about the conflict and saw that the crisis was “the third item, after sports and news about Korean pop stars.’’

“I don’t think people think war is going to come,’’ she said.

But the North Korean regime had a different take, warning yesterday that the situation was “inching closer to the brink of war.’’ The country unleashed a fresh artillery barrage, though this time it appeared to be a military drill conducted on its own territory, the Associated Press reported.

The USS George Washington, a nuclear-powered aircraft carrier, was headed toward the Yellow Sea to conduct the joint military exercises with South Korea.

US officials have pledged continuing support for South Korea. Secretary of State Hillary Rodham Clinton promised South Korea’s foreign minister, Kim Sung Hwan, that Washington would “jointly respond’’ to any aggression from the North, according to a statement posted on the websites of South Korean consulates in the United States.

“It’s a serious situation for South Korea,’’ said Sung-Yoon Lee, Korea expert at the Fletcher School of Law and Diplomacy at Tufts University.

Tuesday’s attack came just days after North Korea showed a visiting US scientist a completed facility that would allow it to enrich uranium, which, Lee said, meant that the North could potentially build a nuclear weapon each year, adding to the six to 10 it is believed to possess.

“The demonstrative purpose here is to instill fear in the South Korean population,’’ Lee said. “This is essential to North Korea’s survival strategy.’’

But the reaction among people in the South, which Lee characterized as a “pervasive attitude of complacency,’’ appears to be part of their own survival strategy. North Korea, though impoverished and economically backward in many respects, has a huge military with an artillery force capable of leveling Seoul at any time, Lee said.

On numerous occasions, North Korea has threatened to reduce the South Korean capital to a “sea of fire.’’

Several times since the end of the Korean War, North Korean forces have attacked South Koreans along the disputed border between the countries. Eight months ago a torpedo sank a South Korean warship, killing 46 people in an attack blamed on North Korea.

“The chronic danger on the Korean Peninsula is a low-level skirmish quickly escalating into a larger conflict,’’ said John S. Park, senior research associate at the Center for Conflict Analysis and Prevention of the US Institute of Peace in Washington, D.C. “North Korea now views itself as a nuclear weapons power and seeks recognition by the US as such.’’

The United States keeps more than 28,000 troops in South Korea to protect its ally. North Korea cites the US presence as the main reason behind its drive to build nuclear weapons.

Complicating the situation, Park said, is the difficulty of analyzing the intentions of North Korea’s reclusive leadership as it undergoes a transition of power from ailing leader Kim Jong Il to his young, inexperienced son Kim Jong Un.

The Fletcher School’s Lee, 42, said that young South Koreans, accustomed to the prosperity that accompanied their country’s rise as an industrial power, think less about war with the North and more about the possibility of the Koreas ending their conflict and eventually reuniting.

That sentiment appeared to be common among members of the Korean community in Massachusetts, an estimated 18,090 people, according to the US Census Bureau’s 2009 American Community Survey.

Tae-In Won, 17, a student at Malden Catholic High whose family lives in Inchon, South Korea, said he was worried about news of the attacks, “but my family was not scared.’’

“North Korea attacked our country, and our relatives are there,’’ said Won, who was celebrating a friend’s birthday at the Korean Garden restaurant in Allston. “But they are still our brothers and sisters. I hope Korea unites one day.’’

Globe correspondent L. Finch also contributed to this report. Material from the Associated Press was also included. David Filipov can be reached at dfilipov@globe.com.