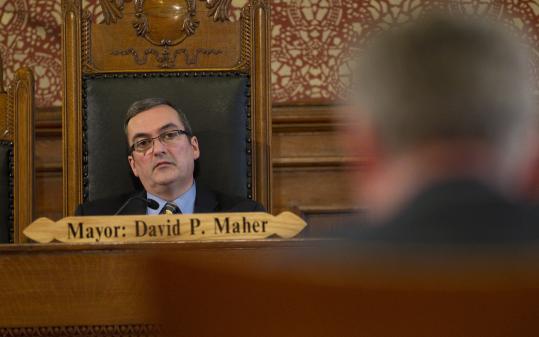 The 60-page report of the Cambridge Review Committee was released June 30, but yesterday was the first time the council, which said it was not directly involved in the process, had the chance to comment publicly.

“I was so profoundly underwhelmed with the process,’’ said Councilor Marjorie C. Decker, who said the council was largely ignored by the panel of 12 academics and law enforcement personnel from around the country, which examined the incident.

Gates, who is black, was arrested by police Sergeant James Crowley, who is white, after a woman called 911 to report a break-in. It turned out that Gates lived at the house and was simply struggling with a stubborn lock damaged in a previous break-in attempt. Gates was arrested for disorderly conduct after police said he was angry and uncooperative with the arriving officers. The charges were quickly dropped as the case caught fire and made international headlines, eventually leading to a meeting with President Obama.

The report said both Gates and Crowley missed opportunities to de-escalate the tension, that they share responsibility for the controversial July 16, 2009, arrest, and that the dispute was avoidable. The committee issued 10 recommendations on conflict resolution, police discretion, and community involvement, which police are integrating.

Healy and Haas spearheaded the report, but were not members of the committee.

“Since the events of July 2009, my goal and the goal of the Cambridge Police Department has been to use this incident as a way to make systemic changes within our department,’’ Haas said after the meeting, which was attended by about 30 people. Crowley and Gates did not attend.

But councilors said the underlying message of the report was to move on from the incident. They said it did not address the issues of race relations and a citizen’s rights to question police.

“Frankly, I thought the report was trying too hard to convince us that we should all join hands and have a ‘Kumbaya’ moment, instead of really taking the bold steps to address something that was traumatic to a lot of people,’’ said Leland Cheung, the first city councilor to speak.

“I just expected, for how much money we spent on this, a whole lot more boldness and depth and insight and really answering questions that people had.’’

The report cost approximately $100,000 to produce.

“The public wants to know that if we’re decent, law-abiding people, we’re not going to end up in handcuffs and in jail,’’ said Reeves, who called Gates “a dear friend.’’

Reeves also criticized the two black members of the review committee for not pushing for a discussion about race and First Amendment rights in the report.

“I don’t know how they could discuss this incident and not mention race,’’ Reeves said in an interview afterward. “The community is also very concerned about the First Amendment, because they’re Americans and they don’t believe that people can come into their homes and arrest them for no particular reason.

“Many of my constituents aren’t even particularly interested in professor Gates, because he has more resources and clout than they do,’’ Reeves said. “They just want to know, going forward: ‘Can I sit on my front steps? Is that OK?’ ’’

“I thought this public meeting was the start of a useful discussion,’’ said Haas, the police commissioner. “Some decisions had to be made very quickly during a very fluid situation, and a recommendation from tonight’s meeting that we take to heart is that we need to work more closely with government officials to define our crisis communication plan, so that we never have a repeat of this incident in the future.’’

In addition to the councilors’ criticism, several members of the public criticized aspects of the report, including the issues of race and First Amendment rights.

Sarah Wunsch, a lawyer for the American Civil Liberties Union of Massachusetts, spoke during a public comment portion of the meeting. She echoed much of the council’s anger.

“A black male is arrested inside his own home after the police officer ascertained he was in his own home. Why? He loudly questioned what the officer was doing,’’ Wunsch said. “Under the First Amendment, people have a right of self-expression, and that includes yelling at the police, being angry at the police verbally, and questioning what they are doing. And that is not probable cause to arrest someone for disorderly conduct.

“We cannot move on unless we address the underlying questions.’’