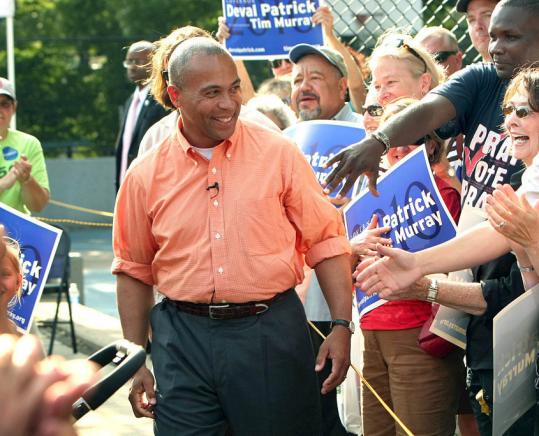 In his biggest rally yet of the campaign, Governor Deval Patrick yesterday attracted hundreds of people to a small park in the South End, where he touted his record for creating jobs, boosting education with an infusion of new federal dollars, and providing health insurance to a higher percentage of people than any other state.

“We made the tough decisions to cut the spending and add new revenues and change the way your government works, while investing in job creation, in education, in health care, in clean energy, building on our strengths,’’ he said. “That optimism and effort is why today we’re first in the nation in job creation and added over 65,000 jobs this year alone. That’s why we’re growing at twice the national growth rate, climbing out of the recession faster than the rest of the country.’’

As the campaign for governor intensifies, with the two leading candidates running in a near dead heat, they spent the weekend traveling throughout the area, staging rallies, attending parades and festivals, shaking as many hands as possible.

Patrick brought in musician James Taylor for the rally at Titus Sparrow Park in the South End and was scheduled to address the Plymouth County Democratic League in Rockland, while Republican candidate Charles D. Baker spent the day at a parade in Holliston, at the Johnny Appleseed Festival in Leominster, and at a barbecue in Mansfield.

Meanwhile, state Treasurer Timothy P. Cahill, who’s running as an independent, sought support at the same parade in Holliston as well as at a farmer’s market in Roslindale and along Quincy Shore Drive.

At the parade in Holliston, Baker and Cahill pumped hands along the short route to a park in the center of town.

Baker said he came to the event, in part, because his brother lives in Holliston. He saw the voters there as open to his campaign and said he was focusing on the persisting woes of the economy.

“It’s all about the pocketbook issues,’’ he said.

Waving a flag while riding a motorcycle in the parade, Chuck Corman, Holliston’s technical director, said he isn’t sure who he will vote for, but he expressed frustration with budget cuts.

“Working with a town that depends on state aid and having state aid cut, we’re the ones that suffer,’’ he said.

Trina Fisher, 48, of Holliston, who watched the politicians parade past, said she remained undecided about who to vote for.

In the South End, Lieutenant Governor Tim Murray said in a brief interview that he was pleased with the turnout.

“It’s just about building enthusiasm at this point,’’ he said. “We knew this would be a dogfight, and we’re going to keep fighting.’’

To loud cheers, Taylor, who was born in Boston, took the podium wearing a cap, but he never broke out in song. He read his speech dryly, praising Patrick for steering the state through the recession.

“He made the hard decisions to help us weather the crisis,’’ he said, emphasizing the main points of Patrick’s stump speech.

Greg Tuttunjian, 58, of Newton, said he was wandering by when he saw a sign for the rally. He said he plans to vote for Patrick.

“It’s been a challenging time, but I agree with just about everything that he’s done,’’ he said.

Brady Merrigan, 23, of Quincy, came with her mother. “We’ve supported him from the start,’’ she said of Patrick. “I like his principles, and his policies. I think he’s our best option.’’

During his speech, Patrick compared himself with his recent predecessors.

“I didn’t cut and run like a whole bunch of folks who had this job before me,’’ he said. “I didn’t just stand on the side and rail against forces beyond my control. Instead, just like you, just like families all across the Commonwealth, we took another look at our plan. We asked ourselves whether it was the right plan for you. We screwed up our resolve, and we went to work.’’

He reminded supporters that he pushed through changes in the state’s criminal offender registry, has consistently supported same-sex marriage, and pressed the federal government to approve the nation’s first offshore wind farm off Cape Cod.

“Optimism and effort, hoping for the best and working for it is . . . what built this country; it’s who we are,’’ Patrick said.

“It’s why Massachusetts leads the nation economically, in education, in health care, in freedom and opportunity.’’